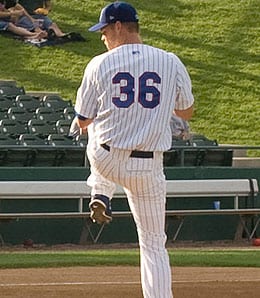 The Rays have finally reclaimed the top spot from the Yankees for the first time since the week of June 14. New York had held the top spot for two solid months until splitting series with the Royals, Rangers, and Red Sox. With the Rays winning their fifth straight on Wednesday, a run which includes a sweep of the Texas Rangers, they have proved they deserve to be the top dog.

Biggest Jump: The Minnesota Twins have taken a four game lead in the AL Central and jumped five spots from 10 to 5 in the process.

Biggest Drop: In the wake of a four-game skid, the St. Louis Cardinals have dropped four spots from 7 to 11.

2. (1) New York Yankees, 74-46: Now they are going to have to show the world how much they want to win in a division that includes four of five teams above .500 and features the top two teams in the league, currently tied for the best record. After some close calls this month, Kerry Wood is now stepping up his game, which is good news given that the Rays have tied New York.

3. (5) San Diego Padres, 72-47: The Pads are in the bottom third in all key batting stats, proving that their top pitching is clearly dominating as the team has won nine of the last ten. Their phenomenal staff has allowed 401 runs, by far the lowest total in the majors. And on Thursday, they try to complete their first ever first four-game sweep at Wrigley Field.

4. (3) Atlanta Braves, 71-49: The Braves are also hot, having won eight of their last ten games, but they have to be worried about the Phillies, a team known for their late season pushes. Philly is just 2.5 games back and nearly matching the Braves win for win, but the Braves have added Derrek Lee to help close out what should be an exciting NL East race.

5. (10) Minnesota Twins, 70-50: A month ago, the Twins fell to third behind in the AL Central, behind the Tigers and White Sox but they’ve regained their composure behind Kevin Slowey’s pitching and won six in a row, including a sweep of the Athletics. Minny can make it two sweeps in a row with a win Thursday against the White Sox.

6. (8) Cincinnati Reds, 69-51: The Reds have clearly redeemed themselves after being swept by their division rivals, the Cardinals, turning it around and sweeping the Marlins. Combine that with the Cards’s current losing kis, and Cincy is beginning to gain a more substantial lead in the NL Central. Owners of the NL’s top offense, the Reds have arrived as a legitimate contender a lot sooner than most of us expected.

7. (4) Texas Rangers, 67-52: Fortunately, the Rangers have a big enough lead over the Angels and Athletics because they just got swept by the Rays. Now Texas heads to Baltimore for a four-game series against an Orioles team that’s holding its own lately. Texas is a comfy eight games up, but before you assume it will walk all over B-More, remember that the O’s swept the Rangers in the last four-game series between these two clubs.

8. (6) Boston Red Sox, 69-52: With both Jacoby Ellsbury and Mike Cameron joining Kevin Youkilis as BoSox hitters that may miss the rest of the season, this team cannot catch a break. They have faced injury problems all season and continue to contend in a difficult division, 5.5 games behind the Rays and Yankees.

9. (9) San Francisco Giants, 67-54: Losing two out of three to the Padres cost the Giants a chance to gain ground in the NL West, and now they are trying to avoid getting swept by Philly Thursday, another huge series with these two teams both in the thick of the NL Wild Cald race. Things don’t get any easier for San Francisco after this, as it heads to St. Louis and then has a tough series at home against the Reds.

10. (12) Philadelphia Phillies, 68-51: This hot team is pushing back hard, going 12-3 in August (and a major-league best 20-5 since losing on July 21), including four in a row to match the current Atlanta streak. Philadelphia wants this division bad and, like it has done in past years, knows how to win down the stretch to take it. However, the question is whether or not the Braves have what it takes to hold the Phils off.

11. (7) St. Louis Cardinals, 65-53: I don’t know what’s happened to the Cards. Last week they swept the Reds, and this week they have lost four in a row including series to both the Cubs and Brewers. Talk about a roller coaster ride for St. Louis fans. On the plus side, in August shortstop Brendan Ryan has been hitting like he actually deserves to be in a major league lineup.

12. (11) Chicago White Sox, 65-55: So much for the White Sox’s fight for this division. J.J. Putz is falling apart and the Sox have lost nine of 12, losing four straight series to Baltimore, Minnesota, Detroit, and then Minnesota again.

13. (14) Toronto Blue Jays, 63-57: Toronto has hung in there, but has upcoming series against the Red Sox, Yankees, Tigers, Rays, Yankees, Rangers, and Rays. I can’t think of a worse schedule for the next month. Casey Janssen, who had looked very sharp this month, picked a bad time for a meltdown Wednesday; the Jays really needed to take that series in Oakland, as things are about to get extremely difficult for the Jays.

14. (15) Colorado Rockies, 62-57: August has seen the Rockies fail to win two in a row, but they also haven’t lost two in a row. On the plus side, Colorad finally has Troy Tulowitzki back off the DL.

15. (13) Los Angeles Dodgers, 61-60: The Dodgers are just 12-24 since the All-Star Break. Talk about a slump — believe it or not, LA had the best record in the NL on June 9, but this team just keeps losing ground and now even the Wild Card is looking like a pipe dream.

16. (16) Los Angeles Angels, 60-61: The Angels had a chance to slim Texas’s eight-game lead down to five when the Rangers were swept by the Rays, but LA couldn’t capitalize at all, also losing three games in a row. Now the Halos have to avoid a sweep of their own on Thursday in Boston. In fact, if LA doesn’t win this last game against the BoSox, it will wind up a dreadful 0-10 against Boston for the season, and that’s a big reason why its run of three straight playoff appearances will likely end this year.

17. (17) Oakland Athletics, 59-60: The A’s have not scored more than six runs in a game since July 24, and now face Tampa Bay in a four-game series. In other words, don’t expect them to score more than six runs at least until after this coming weekend. At least the A’s should be able to limit the TB damage in the opener Thursday with Trevor Cahill taking the bump.

18. (18) New York Mets, 60-60: It’s hard for me to remember a recent year when this team didn’t fall apart. Their big catch of Francisco Rodriguez prior to the 2009 season had been a serious flop, especially while he spent a night in jail last week and has now been placed on the disqualified list as he’ll miss the rest of the season thanks to injuries sustained while beating up a grandfather.

19. (19) Florida Marlins, 59-60: Mike Stanton is on fire on Florida’s road trip, and starters Josh Johnson and Ricky Nolasco looked great this week, although they were pitching against the worst team in baseball.

20. (20) Detroit Tigers, 58-62: Miguel Cabrera’s on-base percentage is making teams pitch around him, but the Tigers can’t seem to get around any teams they play.

21. (21) Milwaukee Brewers, 57-64: I’ll give the Brewers a pat on the back after completing a two-game sweep of the Cardinals in St. Louis, winning both games 3-2. Randy Wolf continues to look strong since the severe beatdown he suffered last month.

22. (23) Houston Astros, 52-67: I could have sworn the only great Chris Johnson played in the NFL for the Titans, but the possible NL rookie of the year in Houston is batting .420 since the All-Star break, helping to push the Astros a little higher in the standings each week.

23. (22) Washington Nationals, 51-69: The great stir over Stephen Strasburg has abated since the Nats have gone 2-8 in their last ten games.

24. (24) Chicago Cubs, 50-71: The Cubs could have won the series against the Cardinals if their horrible bullpen didn’t screw up the lead again, giving up five runs in the ninth on Sunday. Carlos Zambrano, despite some control problems, is looking strong in the series finale against the Pads Thursday afternoon, so clearly he has no interest in turning the game over to his relievers.

25. (26) Kansas City Royals, 51-69: This three-game streak is the most consecutive games the Royals have won since before the All-Star break. The current run has been fuelled by the offense, which has finally shown signs of life in KC.

26. (25) Cleveland Indians, 49-71: So much for the Indians’ push back up the standings this half…they need a win Thursday to avoid a sweep by the Royals before they go to Detroit. A five-game losing skid against KC sure hasn’t helped Cleveland in its quest to avoid the AL Central basement.

27. (27) Arizona Diamondbacks, 47-74: Barry Enright has not allowed more than three runs in any of his nine starts since his debut, so at least there’s something to be excited about in an otherwise lost year in the desert.

28. (28) Seattle Mariners, 48-73: The Mariners are 6-3 under interim manager Daren Brown and they have now won four straight series. If this keeps up, we could soon be talking about a top 25 team. Whoopee!

29. (29) Baltimore Orioles, 42-79: Luke Scott is one of the reasons this team has started to improve, but unfortunately, Buck Showalter’s effect seems to have dimmed as B-More has dropped its past two series.

30. (30) Pittsburgh Pirates, 40-80: The Pirates are 1-9 in their last ten games, and have only won ten games since the All-Star break. Thursday, they will try to avoid their first ever three-game losing streak against the Marlins at PNC Park.

By Trevor Blake
This entry was posted on Thursday, August 19th, 2010 at 3:25 pm and is filed under BASEBALL, MLB Power Rankings, Trevor Blake. You can follow any responses to this entry through the RSS 2.0 feed. You can skip to the end and leave a response. Pinging is currently not allowed.