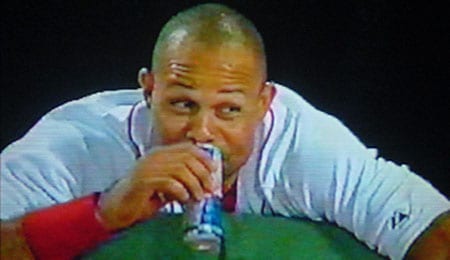 Coco Crisp could provide some instant energy for your Fantasy team…until he gets hurt.

In a rather surprising move, the Mariners re-acquired Russell Branyan Saturday from the Indians for a pair of minor leaguers. Here’s a team that’s in the process of selling Cliff Lee and at the same time investing in Branyan? Yes, the same player that the Mariners didn’t offer more than a one year deal to last fall is now back in the fold. What’s up in Seattle? The Mariners had Branyan, let him go to the Tribe in the offseason and have now got him back when they’re 14 games out? Either $5 million doesn’t buy a whole lot at first base or the Mariners have a few more problems than I have the time to discuss right now.

I feel a rant approaching so let’s move forward and address some of the waiver wire options for the final week of June.

Coco Crisp, OF, Oakland Athletics: Since being activated off the DL Tuesday, Crisp is 7-for-16 with one homer and seven runs scored. He’s even chipped in with a stolen base and, with four games under his belt, is amazingly still healthy. Rajai Davis owners should be concerned for the short term, but let’s face it — how long do the words healthy, productive and Coco Crisp in the same sentence continue to apply? Crisp is heading into free agency this offseason and is an obvious candidate for a trade deadline deal so get him active in all formats and pray for a week or two of health.

Chris Johnson, 3B, Houston Astros: The Astros finally benched the struggling Pedro Feliz and called up Johnson on Tuesday. In 149 at-bats at Triple-A Round Rock, Johnson hit eight homers, drove in 33 and amassed an outstanding .329 BA. The ‘Stros have indicated that he will get the bulk of the playing time going forward, and since his recall, he’s 7-for-17 with four RBI. With playing time comes opportunity, making Johnson a solid acquisition in both NL-only and deeper mixed formats.

Matt LaPorta, 1B/OF, Cleveland Indians: With Branyan gone, the door has opened for LaPorta to slide right into the vacated slot. The 25-year-old LaPorta has been absolutely killing the ball at Triple-A Columbus. In 69 at-bats, he mashed five homers, drove in 16 runs and was hitting .362. Get LaPorta active this week in AL-only and deeper leagues, and given his serious power potential he should also be on the radar in standard 12-team mixed leagues.

Edinson Volquez, SP, Cincinnati Reds: Volquez is working his way back from Tommy John surgery and has now completed three successful rehab starts. On Wednesday, he pitched five solid innings for Triple-A Louisville, allowing three hits and one earned run. He’s reportedly hitting high 90s on the radar gun and is looking at one or possibly two more rehab starts, putting him on track to return to the bigs before the All-Star break. Be prepared to spend some of that FAAB cash this weekend for Volquez’s high strikeout potential.

Erik Bedard, SP, Seattle Mariners: In his second rehab start for the AZL Mariners, Bedard tossed four innings of three-hit ball, allowed one earned run and striking out eight. He is currently penciled in to start July 6 against the Royals. Bedard has started 15 games in each of the past two seasons and looks to be on track for roughly the same this year. Those half season stats do carry value, especially the 162 strikeouts in 164 IP he posted in 2008 and 2009. If you need a quick fix in the pitching categories — especially strikeouts — focus on Bedard and avoid the rush as a solid second half is a good possibility for the oft-injured southpaw.

Andy Oliver, SP, Detroit Tigers: Oliver, Detroit’s second round pick out of Oklahoma State in the 2009 draft, got the call this week to replace the struggling Rick Porcello. In his MLB debut Friday against the Braves, the 22-year-old southpaw gave up five hits with one walk in six IP while striking out four. In 77 1/3 IP At Double-A Erie, Oliver won six games, struck out 70 and posted a solid 3.61 ERA and 1.28 WHIP. It’s been a great start for the youngster in this, his first full professional season, making him a worthy addition in AL-only and deeper mixed formats.

Trevor Cahill, SP, Oakland Athletics: Cahill is currently owned in only 63 per cent of CBS leagues and was only active in 40 per cent this week. Some Fantasy owners are seriously missing the boat with this kid. Saturday, he shut down the Pirates over 7 2/3 IP allowing only only two hits and striking out ten. On the season, Cahill is up to seven wins with a 2.88 ERA and 1.08 WHIP. What I find particularly positive is that over his past five starts, in 33 1/3 IP he’s struck out 32. Take a peek at the available free agents in your league and if by some chance Cahill is available get him rostered and active immediately.

Logan Morrison, 1B/OF, Florida Marlins: According to the rumour mill, the Marlins are shopping Cody Ross. Meanwhile, Morrison is chomping at the bit and has recently been playing in the outfield. Something has to give on a struggling Marlin team (that has already canned their manager), making Morrison my speculative pick of the week. His bat is ready and a preemptive move now could be much cheaper than waiting until he gets the call. It could be worth the wait.

Jamie Moyer, SP, Philadelphia Phillies: Let’s give the old guy some love. Moyer has allowed two or less earned runs in four of his past five starts for the Phillies. He’s now up to eight wins on the season with a decent 4.43 ERA and 1.06 WHIP. Not too shabby for a pitcher who will be 48 in December.

Jake Fox, 3B/OF, Baltimore Orioles: The combination of catcher eligibility and those 11 homers he smacked in just 216 at-bats for the Cubbies last year, makes Fox worthy of a gamble in AL-only leagues.

Jason Castro, C, Houston Astros: The 23-year-old got the call this week and slugged his first big league homer Tuesday off Matt Cain. Give Castro a spin in NL-only leagues, but remember that we are talking about the sad sack Astros and a young catcher, so be modest in your expectations.

Chris Perez, RP, Cleveland Indians: Carlos Santana got the call, Branyan has been shipped out and Kerry Wood should be next on the block in Cleveland. Perez is currently owned in only 19 per cent of CBS leagues and is the closer of the future. Get him rostered and stashed to avoid paying the price once Manny Acta determines that a pitcher with a 7.47 ERA is not “his guy.”

By Tim McLeod
Tags: Coco Crisp
This entry was posted on Sunday, June 27th, 2010 at 5:07 pm and is filed under BASEBALL, The Wire Troll, Tim McLeod. You can follow any responses to this entry through the RSS 2.0 feed. Both comments and pings are currently closed.