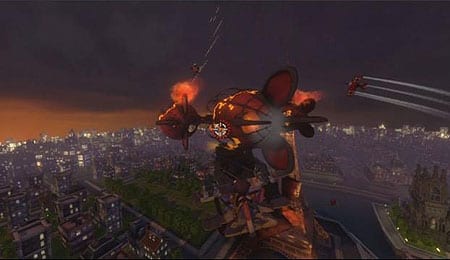 I’ve got to be honest, when I saw Snoopy Flying Ace was releasing on Xbox Live Arcade I figured it would be some sort of cutesy game for little kids. I was wrong. Instead what I found was an accessible aerial combat game that uses the Peanuts license to supplement the strong gameplay rather than relying on it to carry an otherwise weak title.

Too many games fall into the trap of making flying overly touchy or complex, and in doing so suck much of the fun right out of it — I’m looking at you right now, Battlefield. Rather than following suit, Snoopy Flying Ace manages to put a lot of options at your disposal while keeping things simple. Boosting, braking, firing and steering are all intelligently placed while the more advanced maneuvers (such as barrel rolls) are executed with just a flick of the right stick. It all works great.

Everyone will instantly recognize all the Peanuts characters here, and the game really does a nice job of mixing the cartoony aspects you’d expect from Snoopy and company while also presenting varied environments and aircraft. There’s nothing jaw dropping here, but Snoopy Flying Ace does its best work by creating strong missile and explosion effects, which are key for a dog fighting game (sorry, Michael Vick, not that kind of dog fighting) such as this. It’s also impressive to see the screen fill up with so many planes and explosions without any noticeable dip in the frame rate.

The music doesn’t do much for me as there’s a fairly limited score that won’t hold your interest for very long. However, the sound effects are quite solid as bullets whiz past and planes detonate. There’s even some of Snoopy’s signature noises mixed in.

Although Snoopy Flying Ace was originally set to be a multiplayer-only game, developer Smart Bomb Interactive changed their minds along the way and included an 18-mission campaign mode. The game tries to keep things fresh by having Snoopy complete a wide range of tasks from flying through an obstacle course to repelling incoming enemy squadrons with anti-air artillery. There are also plenty of dog fights and even a large scale encounter with some not-so-subtle nods to the Death Star.

The levels vary in length from extremely short to some than can take north of 10 minutes to complete, leading to a fairly brief campaign. Even with that brevity, however, I grew tired of the single-player mode as I progressed. The primary reason for that was the A.I.’s otherworldly ability to evade my attacks, causing battles to drag. Adding a second person for co-op play helps a bit, but it’s probably best to think of the campaign as an elongated tutorial for online play.

That’s because online multiplayer is where the game shines. There are four basic modes: dog fight, capture the flag, dog pile and pigskin, with dog fight and dog pile having team variations as well. This may not sound like a lot, but the modes are varied and provide a lot of fun. The main draw here is dog fight where you and up to 15 other players battle it out for supremacy of the skies. It’s incredibly hectic and fun once you get the hang of it, particularly in the free-for-all version.

Dog pile is essentially “Oddball” from Halo where the plane with the bone accumulates points while everyone else tries to shoot them down. Capture the flag is self explanatory, and pigskin combines planes, bullets and football. All the peripheral modes are strong, though my issue with both pigskin and CTF is that it can be difficult to see the object you’re trying to collect.

Beyond the game type and location, Snoopy Flying Ace also has several different types of planes (some are quick and maneuverable, others slow but powerful), a bunch of secondary weapons to swap in and out, and lots of classic Peanuts characters to choose from to be your pilot. Given all the variables, the multiplayer here has some legitimate staying power.

If you enjoy online gaming and are looking for something different from first-person shooters and sports titles, Snoopy Flying Ace is an excellent alternative. There’s a lot of content packed in here, and at just 800 MS Points (US$10) it’s a great value.

By Herija Green
This entry was posted on Thursday, June 17th, 2010 at 1:54 pm and is filed under Herija Green, Video Game Reviews. You can follow any responses to this entry through the RSS 2.0 feed. You can skip to the end and leave a response. Pinging is currently not allowed.