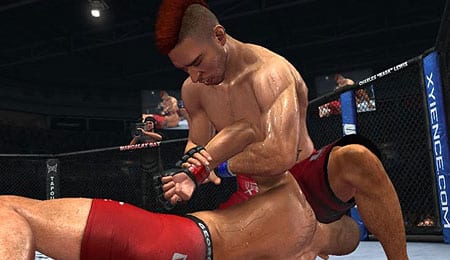 The Ultimate Fighting Championship has come a very long way since its beginnings as a fringe sport in the early 1990s. Despite its growing popularity, the UFC didn’t cross over into the video game realm until last year when UFC Undisputed 2009 was released to critical and commercial success. Now with a year to iron out the kinks, THQ is back with UFC Undisputed 2010, a game that builds on the original’s strengths to deliver an even more engaging one-on-one fighting experience.

The phrase you’ll need to familiarize yourself with heading into UFC Undisputed 2010 is “learning curve,” as the game uses a fairly complex combination of buttons and analog stick movements to simulate the intricacies of mixed martial arts. You should grasp the basics fairly quickly — especially the striking game — but when you’re in the clinch or grappling on the mat it can get confusing.

I won’t even attempt to lay out the complexities of the combat system here. Just understand that button mashing is going to do nothing except get you knocked out or submitted in short order. There is an available tutorial that helps lay the groundwork, but the only way to become proficient here is by getting in the octagon and practicing. Log enough time and you’ll get comfortable, though even after more than a week with the game I wouldn’t say things are second nature.

One annoyance worth mentioning is that the game asks you to rapidly rotate the right analog stick to apply pressure in a submission hold or execute a takedown. It’s not fun to do, and I always feel like I’m putting undue wear and tear on my controller.

Anyone familiar with UFC will have little difficulty identifying luminaries such as Brock Lesnar, Quinton “Rampage” Jackson or Georges St-Pierre as they compete in the virtual octagon. Thankfully, the created fighters are on par visually with their real life counterparts so all the fights in career mode look like two legitimate brawlers battling it out. The close ups and post-fight celebrations don’t look great, however, particularly when fighters bounce up and down with T-shirts on. For whatever reason, the cloth physics really look wonky.

Where the game does its best work is in the movement of the fighters in the ring as punches, clinches, takedowns and transitions all look smooth with no body parts passing through one another. The way bodies show damage is also very impressive, and there are few things quite as satisfying as watching your opponent between rounds with both eyes swollen almost completely shut. Blood flows freely here and will splatter not only all over the mat, but all over you as well. There’s something undeniably visceral about celebrating a knockout with a mix of sweat and your opponent’s blood on your torso.

You’ll also find the game does a very nice job of mimicking the UFC presentation, including some cool pre-fight introductions and even videos hyping big matches where the fighters talk about their upcoming bout. Stat overlays and graphics are spot on.

All the voice work in UFC Undisputed 2010 is pretty solid, particularly the ring announcing of Bruce Buffer, but the issue here is repetition. Both the fighters and announcers tend to say the same things over and over again, especially in the career mode once you reach a high enough level to be interviewed after fights by Joe Rogan. It’s disappointing that your fighter doesn’t have anything new to say after defending his belt a half-dozen times or having a rematch. Unfortunately, you’ll be hearing your fighter’s lines repeat within a few events.

On the plus side, the sound effects are rock solid and add some real impact as you rain down blows on your opponents. As for the soundtrack; it’s fine but eminently forgettable.

The matches in UFC Undisputed 2010 are both intense and cerebral affairs, at least once you move past the lower difficulty settings. As with the sport itself, fights can end on knockouts, technical knockouts (referee stops the fight), doctor stoppages (due to cuts) and submissions. What makes the game so intense is that these things can occur at any time, even when you’re seemingly in control. I had fights where I dominated the first round only to be knocked cold by an uppercut. Conversely, I’ve been in a terrible spot on the mat and turned it into an unexpected choke for the tap out. It’s that constant level of equal parts hope and fear that make the matches so unique.

In terms of variety, you can look at it in one of two ways. On the one hand, fights evolve very differently from one to the next, and there is no surefire strategy for beating an opponent. Each fighter obviously has strengths and weaknesses, but strikers will be taken to the ground and submission specialists will be forced to trade blows. Plus, with over 100 fighters on the roster (along with your ability to create new ones) there are plenty of possible matchups.

On the other hand, the matches are always one-on-one affairs with only the number of rounds changing in championship fights. It’s not like THQ’s pseudo-sport juggernaut, WWE SmackDown vs. Raw, which is able to mix things up with various match types and storylines. So if you’re looking for big differences in what you’ll be doing there’s not much of that to be found, even from one mode to the next.

The game comes with several modes — tournament, title and title defense, Ultimate Fights — but with the exception of Ultimate Fights they’re all basically variants of one another as you just fight a bunch of matches (however, Title Defense does feature secondary goals such as winning in the first round or without getting cut). Ultimate Fights allows you to recreate classic matches from UFC history with several goals to meet when playing as either fighter. These range from pulling off certain moves to winning at a specific time or manner. They’re all fine for what they are, though clearly the long-term single-player draw of UFC Undisputed 2010 is the Career Mode.

You’ll start by creating a fighter, and the game gives you a good number of options in the important areas like moves, clothing and appearance. It’s not as robust when it comes time to choose things like celebrations and voices (there are only five) but that’s a minor complaint. Once your fighter is ready you’ll be tossed into the World Fighting Alliance, which is essentially a minor league promotion. Score enough wins and you’ll be paid a visit by Dana White, who’ll invite you to fight in the UFC. From there it’s all about climbing up the card, moving from Ultimate Fight Night up to pay-per-view bouts and eventually title matches. Sounds simple, right? It isn’t.

You’ll start off very weak with low skills and attributes (strength, speed, cardio) and will need to spar or train to build them up. Although you can automate sparring, you need to do it manually to earn enough points to progress in a timely fashion. The game offers you the chance for free or focused sparring, but once you get a feel for how to rack up skill points against your sparring partner there’s no real reason to do anything except the free variation.

Training, on the other hand, is 100 percent automated and affects your attributes. Each activity causes your fighter to become fatigued, which is countered by resting. The tradeoff is that by resting your conditioning suffers so you’ll need to plan out your strategy heading into the fights. You can also enter a game planning session for temporary skill boosts, but it doesn’t seem worth throwing away the sparring and/or training time.

The other readily available activity is to attend fight camps, which allows you to learn moves piecemeal and not just choose from premade move lists. You simply go to a camp, pick out a move and head into a sparring session where you’re asked to execute the move as often as possible. The more times you do it successfully the mode adept you become.

As you become more famous additional activities will open up, such as sparring for a camera crew or predicting the results of an upcoming card. More fame also allows you to hire better trainers and sparring partners as well as receive better gear from sponsors. Moving up the card also has you doing things like attending weigh-ins and conducting post-fight interviews with Rogan. It’s all pretty cool, even if it becomes a bit repetitive as your career continues.

UFC Undisputed 2010 also has an online multiplayer with some interesting items like Fight Camps (this one time, at Fight Camp…) — where you and other gamers can fight under the same “flag.” Unfortunately, my matches have really struggled with lag. THQ has announced a patch is in the works, which will hopefully address the issues, but at this point online play is spotty at best. Also, those considering buying UFC 2010 used should know that the game requires a download code to play online. It’s included for free in new copies, but will set second-hand owners back 400 MS Points (US$5).

Although there are times when I still get frustrated at the complex controls, UFC Undisputed 2010 is a deep and rewarding fighting game at its core. Fans of MMA and those looking for an entertaining head-to-head multiplayer offering shouldn’t miss this one.