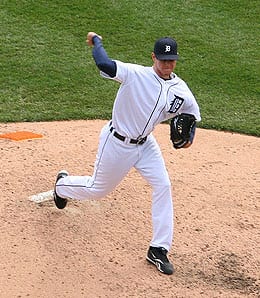 Ryan Perry started well, but has struggled in recent weeks.

The Detroit Tigers have lost a bit of ground in the AL Central recently, slipping 3.5 games behind division leading Minnesota. Fortunately, they remain five up on the third place White Sox, but with the Wild Card gap growing for Detroit, the team’s best chance to make the playoffs is looking more and more like it will have to come via a division crown.

Inconsistent offense and a rotation that has struggled at times has held Detroit back this year and put the team behind its pace of a year ago when it blew a late-season lead and lost a post-season berth in a one-game playoff against the Twins.

The bullpen in Motown, however, has been a real bright spot, ranking first in the AL in ERA, two-tenths of a run better than anyone else’s pen. Let’s take a look at some of the Tiger relievers who have helped make this the league’s best bullpen.

Potential closer of the future Ryan Perry had been rolling pretty well until the past couple of weeks when all of a sudden he went through a horrid stretch during which he was scored on in four straight appearances. That jacked his ERA up three and a half runs per game, but thankfully he stopped the bleeding Sunday by getting a flyball out on the only pitch he threw to earn a scoreless outing.

We ranked Perry among the top 60 relievers in the game earlier this season, but he’s barely been a top 200 reliever so far. Part of a recent Detroit trend to draft hard-throwing, advanced arms in the first round, Perry was superb in April and the early part of May before collapsing in the past couple of weeks. There’s been talk of him being demoted, but Detroit plans to keep him around for now and use him in low pressure situations as he tries to work his way out of the funk. I love Perry’s long-term potential, but until we see a marked improvement in his command, it’s best to ignore him for Fantasy purposes unless you’re in a Keeper or extremely deep AL-only league.

Another reliever long considered to have closer potential is Joel Zumaya, the poster child for the dangers of Guitar Hero. We ranked Zumaya just out of the top 50 but, unlike Perry, he has delivered and even exceeded that projection. Of course, injuries always seem to be a concern with Zumaya, and we got another scare Saturday when a callus forced him out of the game. He said he could have pitched in Sunday’s game if needed, so thankfully this latest health woe is indeed minor.

Zumaya is on a roll now, rhyming off six straight scoreless outings to lower his ERA well under 2.00. He dominated in April and was pretty darned sharp in May as well, putting the nightmare that was 2009 – his worst big league season – well behind him. Zumaya is on pace to set a new career high in innings (again, with the caveat of his injury history) and has done a superb job in reducing his hit rates. Right now, he is one of the more dependable set-up men in the AL and already worth owning in an AL-only league, but will become a must own in all formats should anything happen to closer Jose Valverde.

Speaking of Valverde, it’s hard to imagine his first season in Detroit going any better than it has so far. The dude has been scored on exactly once all season long, and he’s currently riding a scoreless streak of 22 straight appearances – which ties the all-time Tiger mark set in 2000 by Todd Jones. He’s walked 10 in 23 1/3 IP, which is more than I’d care to see, but given how few hits (nine) and homers (one) he’s allowed, whatever wildness Valverde has exhibited hasn’t come back to haunt him. We projected just out of the top 10 among relievers, but he’s easily been one of the ten best in the game. Looking for a sell high candidate? Valverde could be your man. I could see trying to peddle him for someone like Leo Nunez, a reliever who is not considered top tier, but is enjoying a solid year. The kicker is that you could ask for a bat back in that deal as well, and may come out on top in the end.

Another pleasant surprise in the Tiger bullpen has been the continued development of lefty Phil Coke, acquired in the Curtis Granderson trade. Notwithstanding his gopheritis, Coke was solid with the Yanks last year. This season, long balls have not been a problem at all and that’s allowed Coke to put up better bottom line results despite a higher hit rate and much worse ratio. Assuming he can turn things around after struggling in May and reduce the number of baserunners he allows while still maintaining that low home run rate, Coke could be on the verge of something special. Right now, as a lefty specialist, he’s only of use in a very deep AL-only league that tracks holds.

Two other Tiger relievers have distinguished themselves through the first couple of months:

By RotoRob
Tags: Detroit Tigers
This entry was posted on Monday, June 7th, 2010 at 1:22 pm and is filed under BASEBALL, RotoRob, Team report. You can follow any responses to this entry through the RSS 2.0 feed. Both comments and pings are currently closed.