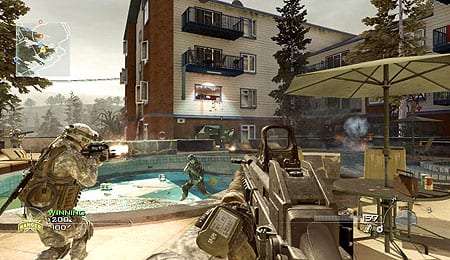 If you’re one of the millions of gamers that have been pouring hour after hour into Activision’s online goliath, Modern Warfare 2, odds are you’ve been anxiously awaiting some new locations in which to smoke the opposition. That wait is over. Last Tuesday marked the release of the Stimulus Package, which offers five downloadable maps at a price of 1,200 MS Points (US$15) for the Xbox Live service — Playstation 3 availability has yet to be announced.

The map pack contains three brand new settings along with a pair of favourites from Infinity’s Ward last installment, Call of Duty 4: Modern Warfare. How you feel about Activision’s asking price — 400 points above most map packs — may be directly tied to how much you played COD4. If you’re new to the series or played the last one sparingly, paying US$15 for five new maps isn’t a bad deal at all. However, if you’ve already invested a lot of time into the COD4 maps this could feel a bit steep.

Those that elect to take the plunge will be greeted with the completely new Bailout, Salvage and Storm along with Crash and Overgrown from Call of Duty 4. Here’s my take on what’s included.

My personal favourite of the new maps, Bailout takes place in a bombed out apartment complex. There are several buildings throughout the map that offer multiple levels and vantage points. It holds up well regardless of the number of players or game type, though I found I had the most fun with Domination. The battles that take place for the B position are some of the game’s most intense, and I never felt like any spot I went on the map was airtight or indefensible. It also features more vibrancy and colour than the traditionally bleak MW2 multiplayer maps, further ensuring it stands out from the crowd.

Easily the smallest of the additions, Salvage is built for wire-to-wire intense combat. My first few experiences with the map were underwhelming, but I developed an appreciation for it the more I played it. The tight quarters and minimal elevated positions create a lot of quick twitch gun battles while reducing sniping to little more than an afterthought. Even though it seems straightforward at first, rest assured there are a lot of lesser traveled paths that allow for deadly flanking maneuvers. One drawback, though, is that it feels overcrowded during battles with more than 12 players.

The driving rainfall of Storm gives it a very cool vibe visually. Unfortunately, I haven’t found the combat to fare as well. The map is broken up evenly with two-storey buildings on either side of a centrally located warehouse. There’s also a lot of crates that can be used for cover, which reminded me of the Foundry map on Halo 3.

However, the map’s layout makes for long, uninterrupted lines of sight from several positions, which makes for far too much sniping. It’s not really an issue in death matches, but when there are objectives involved, too many gamers that are only concerned with their K/D ratio will set up shop and pick people off with no real interest in capturing points or planting bombs. With so many would-be snipers there’s also very little fighting in the map’s central hub (the warehouse), which is disappointing.

A run down urban area plays host to Crash, which is so named because of a downed helicopter in the middle of the map. This was my favourite map from Call of Duty 4, and it’s a beautifully constructed maze of back alleyways, two-storey buildings and even a legitimate sniper tower. Crash really does strong work in being playable many different ways with every strategy you see having a counter. It’s been gussied up a bit for the jump to MW2, but it retains everything that made it great.

Overgrown served as a sniper’s paradise in COD4, and while it has still retained that vibe, it has definitely received some touchups to make it a little more functional to move building to building. A dried creek bed that runs through the dilapidated farming village cuts the level in half and remains a no man’s land unless you’re sprinting from one side to the other. There are plenty of buildings to hide in or clear out and the destructible gas pump that billows smoke is probably the most enjoyable object to demolish on any map. This won’t be everyone’s cup of tea because camping is a very viable strategy, but it’s got a different setting and holds up well with nearly all game types.

If you’re a haggard veteran of Call of Duty 4 battles, the price may feel inflated, especially considering no other goodies (perks, challenges, Spec-Ops missions, achievements) have been added. Nonetheless, when you consider that even the weakest link in the map pack offers substantial enjoyment, it’s hard to imagine those still playing Modern Warfare 2 regularly wouldn’t get enough value out of the Stimulus Package to make it a worthwhile investment.

By Herija Green
This entry was posted on Monday, April 5th, 2010 at 5:28 pm and is filed under Herija Green, Video Game Reviews. You can follow any responses to this entry through the RSS 2.0 feed. You can skip to the end and leave a response. Pinging is currently not allowed.