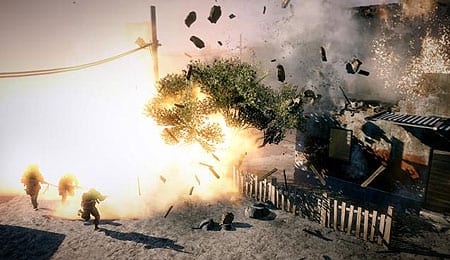 Bad Company 2 is at its best when things get chaotic.

You’ve got to hand it to Electronic Arts and Dice, it aims high. Buoyed by the success of last year’s downloadable release Battlefield 1943, the combination puts the reigning king of first-person shooters, Modern Warfare 2, squarely in its sights with the latest installment in the series, Battlefield: Bad Company 2.

The problem with inviting such comparisons is that if your product isn’t up to snuff it can come off as little more than a cheap knockoff. So was Bad Company 2 able to step out of the self-imposed shadow of Modern Warfare 2 and carve out its own identity? Read on.

Things are pretty much standard fare here when you’re on foot, meaning anyone with FPS experience will pick up the controls quickly. The only thing that may take some time to get used to is having your melee attack mapped to the right bumper. To me it made using it feel like a pre-planned event rather than a defensive reaction, which can be problematic when you’re having an unexpected face-to-face encounter with a tango.

Where the game struggles is when operating the vehicles. During the campaign you’ll find yourself driving all kinds of things, from ATVs to tanks, and yet none of them feel natural. I always felt like my vehicle was drifting, and the smaller vehicles move so fast it can be difficult to control. The button mapping seems odd as well with the triggers moving your tank back and forth instead of firing.

Once online, you’ll have the opportunity to fly a helicopter. Two words: learning curve. If you played Battlefield 1943 with any frequency, you know that flying a plane with any level of competency took a significant time investment, and the chopper might be even tougher. Sure, there’s an undeniable level of satisfaction obtained when you’re no longer crashing it into the ground, but it still feels needlessly complex.

The visuals in Bad Company 2 are generally very strong, highlighted by environments that border on photorealistic with beautiful mountains and jungles looming on the horizon. It can be nearly stunning at times. Character models are also good, even if there are a lot of “clones” among your enemies – most games get around this by putting some sort of headgear on the enemies, but you won’t see that done extensively here. Buildings are completely destructible and bringing them down piece by piece looks really cool and never gets old.

Things don’t hold up quite as well when you’re close to certain objects, however. For example, a weather-worn sign that looked good from a distance never gets any clearer as you approach, and it ends up being unnatural. The gun models are also underwhelming, lacking the type of detail we’ve seen in other recent titles. Despite those shortcomings, though, the majority of what you’ll see here ranges from good to excellent.

Where the game truly excels is in recreating the sounds of battle. Explosions are sudden and impactful, leaving your virtual ears ringing, and the gunfire sampling is outstanding. The voice acting can be a little uneven, but for the most part the four primary characters deliver the goods even if three of them are unapologetic stereotypes. I also enjoyed whatever sound effect they cooked up for the ultimate weapon during the campaign — it’s very interesting with a decided otherworldly quality to it.

Like most modern shooters, Battlefield: Bad Company 2 contains both single-player and multiplayer components. The campaign here stretches over 13 levels, with 12 of them focusing the men of B Company. The overarching plot centres on a brewing conflict between the United States and Russia (sound familiar?) with U.S. intelligence concerned about the Russians acquiring a new super weapon.

Even though this may sound like the backdrop of some intense moments, the story itself is told with tongue firmly planted in cheek. The members of B Company find the humour in nearly any situation — so much so that even the moments you’d think would carry some gravity pack no emotional punch whatsoever — and the developer’s missed no opportunity to take not-so-veiled shots at MW2. To be fair, the story here is no more implausible than what was seen in Modern Warfare 2, but Infinity Ward simply did a better job of creating intensity through some incredible set pieces.

In terms of length, you can expect to put around seven hours into the campaign your first time through, though there is minimal replay value. Sure, there are guns to collect and hidden items to detonate, but most of the trophies/achievements can be acquired on one trip through. Plus, too much of that initial time investment is spent replaying sequences because of an absurdly uneven checkpoint system.

Take, for instance, one point where I found myself advancing solo through a city street with enemies all around while my squad members joked about speaking “spanglish” in the distance (I could still hear them for whatever reason) without hitting a checkpoint for over 10 minutes. After finally reaching it, my squad instantly caught up and I hit my next checkpoint in less than 60 seconds. Trust me — it can be as infuriating as it sounds.

Squad and enemy A.I. are both solid, though there are times when the other three members of B Company are standing in the open getting pelted by bullets and rockets while looking none the worse for wear. It’s a necessary evil since your squad isn’t composed of faceless and ultimately interchangeable bots a la MW2, but it definitely takes the immersion level down another notch or two when you’re the only one that can be hurt.

Things take a decided change for the better once you venture online, however. It’s here that Battlefield: Bad Company 2 emerges as a legitimate challenger for Modern Warfare 2, pushing a team-oriented focus that’s almost as much about working together and utilizing sound strategy as it is about reflexes and steady aim.

One major difference between Bad Company 2 and the competition is that the environments here are completely destructible, which means strategies will change as cover points are reduced to rubble. Those that have grown tired of the amount of camping in other titles will find this to border on a revelation. If there’s a sniper on the roof of a building, simply bring the entire building down and force them to adapt.

When you start a game, you’ll be asked if you want to join a squad, which allows larger teams to segment into smaller groups. It also brings the added benefit of your squad members serving as mobile spawn points. This way you can have one member set up shop behind enemy lines and have the rest of your crew fan out and engage the enemy from behind.

The game features four different kits — assault (soldier), engineer, medic and recon (sniper) — and the most successful squads/teams will favour a mix. Each kit possesses its own strengths and weaknesses, and Bad Company 2 does a great job of balancing them, making it more a matter of preference or need within a group than one being overpowered (though you’ll definitely see far too many would-be snipers). Like in the Call of Duty series, you unlock new weapons, gadgets and abilities (called specializations) as you earn experience. It’s a considerably slower leveling process than other games, but you never feel like the next reward is too far off.

Variety isn’t the game’s strongest suit with only three game types at your disposal: Rush, Team Deathmatch and Conquest. Still, the modes are all quite different with Rush being the best of the bunch. It’s within this mode that you really get a feel for what Bad Company 2 is capable of with up to 24 players battling on foot and in vehicles over massive maps. When you’re with capable teammates and the game is running smoothly I’m not sure there’s another combat experience on consoles that can match it.

One item worth noting is that there were a ton of server issues surrounding the launch of this game, as there were when Battlefield 1943 hit Xbox Live and Playstation Network. Considering the amount of resources that went into hyping this game and the lessons that should’ve been learned last year, it’s pretty disappointing to see them present again. Thankfully, I haven’t experienced much lag once I’ve gotten in a game, which can be considered a silver lining.

If you’re part of the dying breed that plays games almost exclusively offline you’re unlikely to find enough originality or replay value within the campaign to warrant more than a rental. However, if you love bringing the pain online, consider Battlefield: Bad Company 2 a great pickup as a more cerebral shooter than you’ve seen recently.

By Herija Green
This entry was posted on Sunday, March 21st, 2010 at 8:13 pm and is filed under Herija Green, Video Game Reviews. You can follow any responses to this entry through the RSS 2.0 feed. You can leave a response, or trackback from your own site.