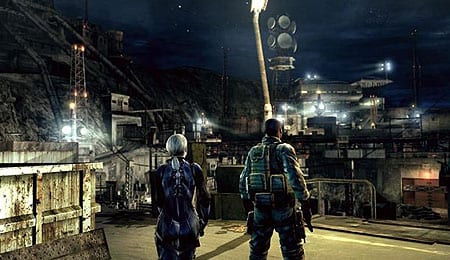 The only thing standing between you and that communications array is about 300 hostiles.

After treating gamers to a more vintage Resident Evil experience with its first DLC, Lost in Nightmares, Capcom goes action heavy in their second offering, Desperate Escape, duplicating the gameplay found in Resident Evil 5. Whereas the last DLC offering told a story leading up to the events of the main game, Desperate Escape runs parallel to it with you guiding Jill Valentine and Josh Stone — a peripheral character from RE5 — through hordes of infected foes in an attempt to escape the Tricell facility and provide support to Chris Redfield and Sheva Alomar.

Actually, classifying the enemy presence in Desperate Escape as a horde might be an understatement as the game throws bullet sponges at you left and right. In fact the combined body count from my initial tromp through this level was well above 300, which is pretty impressive considering it took me just north of an hour to complete (some quick math indicates that equates to roughly five enemies per minute). The constant pressure of these pseudo-zombies bearing down on you can wear thin after a while, though, as there’s not enough down time to create sufficient tension.

While Lost in Nightmares offered both an all-new location and unique adversary, Desperate Escape has a familiar setting and completely recycled enemy list. You’ll see all the various types of “Majini” that you engaged throughout the full retail release, including boss types like the maniacal chainsaw guy, executioner and the heavy set gentleman that wears a beret and wields a Gatling gun. About the only new wrinkle thrown into the mix is that some Majini will man rocket launcher batteries, meaning staying in cover is a necessity. Of course, with such a large enemy presence, remaining concealed from the rockets is easier said than done.

Desperate Escape will undoubtedly test your combat mettle. So much so that tackling it with an A.I. partner can be an exercise in frustration as you watch them burn through ammo unnecessarily, waste precious healing herbs or fail to cover your six for the umpteenth time. Fortunately the game once again supports co-operative play both online and offline, which makes for a more enjoyable experience.

As noted, you can expect to invest around an hour on your first run, though upping the difficulty will tack on additional time. As with the first add-on, Desperate Escape also has Score Stars to find and comes packed with two more playable characters for the Mercenaries Reunion: Josh and everyone’s favourite medic, Rebecca Chambers (Resident Evil Zero).

Anyone that found Lost in Nightmares lacking in the fighting department should have their bloodlust satisfied in a big way this time around as Desperate Escape provides a sustained combat experience that will have you racking up the kills. It doesn’t escape the “been there, done that” feeling, but if you preferred the action-oriented RE5 to past titles in the series it should be right up your alley. Given its more than palatable price tag (400 MS Points, $5) it’s a worthwhile download to be sure.

By Herija Green
This entry was posted on Sunday, March 7th, 2010 at 7:52 pm and is filed under Herija Green, Video Game Reviews. You can follow any responses to this entry through the RSS 2.0 feed. You can skip to the end and leave a response. Pinging is currently not allowed.