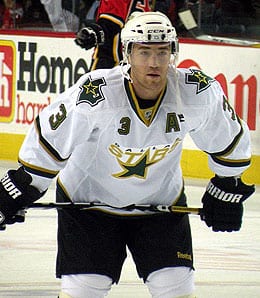 Stephane Robidas is in a horrible slump.

This is not going to be your normal Wire Troll. Yes it is Valentine’s Day (well, it was when I wrote it, but RotoRob was too busy making sweet, sweet love yesterday…err, onanism counts, right?). With a little bit of love and maybe an ounce of prevention, we will help you avoid the landmines that you should stay away from come March 1. In a twist, these are the players you may want to stay away from if you see them on the waiver wire. Do not be tempted by the Olympic Break either. Some of these players may be freshly placed on your local waiver wire as well.

Now our short and sweet three.

Stephane Robidas, D, Dallas Stars: Up until December 31, it looked so good. Robidas had potted 10 goals up until then and it looked like he was having a great season. But there is one problem. He has not found the back of the net since and has no points and a -5 in his last six games. Now I know his 33 points is going to look attractive, but even his ice time has decreased by two to three minutes a night since his pre-2010 levels. Rumours from Dallas suggested he might even be a healthy scratch before the Olympic Break in an effort to try to maybe shake him up a bit. Either way, come March 1, there wil be better options out there. Do make sure you weigh all options before settling on Robidas.

Cam Barker, D, Minnesota Wild: Yes, he was traded last week for Nick Leddy and Kim Johnsson. Barker was a salary cap casualty, but the reality is he vastly underperformed in Chicago this season. Fourteen points in 51 games is not really all that great for someone who had higher expectations thrust upon him. Minnesota will expect him to take on more of a scoring role and he may play more, but will he really improve that much offensively? In the short term it may be a struggle and unless you can wait until your Fantasy playoffs, Barker may be someone you should stay away from. If he plays 15 or 16 minutes a night, that still just is not worth it for you Fantasy owners out there. Seek other options if you can ASAP. Do not be sucked in.

Dainius Zubrus, C, New Jersey Devils: I know it will be tempting to pick him up since he is paired with Ilya Kovalchuk, but steer clear of Zubrus for now. Zubrus really is feast or famine and it usually is more famine than feast for his owners. The potential is there and his body is tailor made for a team that can use a power forward, but for whatever reason Zubrus just can never produce enough. The key is that there are better options you can trade for — especially during the break. For example, see if you can sneak an Andrei Markov on your team. He has about the same point per game production as Zubrus, but once he gets going, look out! With Zubrus, on the other hand, what you see is what you get, unfortunately.

On behalf of yours truly, I wish everyone a Happy Valentine’s Day and of course President’s Day on Monday. See you next weekend with more shenanigans and Fantasy hockey advice here on The Wire Troll.

By Chris Wassel
This entry was posted on Monday, February 15th, 2010 at 10:59 pm and is filed under Chris Wassel, HOCKEY, The Wire Troll. You can follow any responses to this entry through the RSS 2.0 feed. You can leave a response, or trackback from your own site.