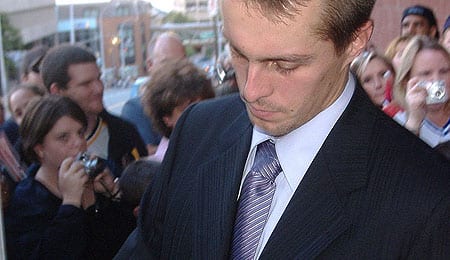 Don’t count Jaroslav Halak and the Slovakians out of the medal chase in the Olympics.

This week, the Fantasy Hockey Roundtable was asked: “While the Olympics don’t count toward Fantasy points, they’re still fun to watch. Which NHL player will dominate this Olympics? Why?”

Here’s what our panel had to say:

Olympics Men’s Hockey is usually won by strong goaltending. While I expect to see a Canada-Russia final I do see the Slovakians finishing a surprising third due to the performance of Jaroslav Halak. While most experts have Sweden finishing third, it’s a team that looks better on paper and tends to underachieve. With Bob Gainey stepping down earlier this week, there are rumblings of Carey Price being traded. If this happens, Halak will be riding into the Olympics full of confidence. If a trade doesn’t occur he will be proving his worth on the world stage. Either scenario bodes well for Halak.

Much to the chagrin of my American friends, I’m going to predict a Canada-Russia final. Alexander Ovechkin and Sidney Crosby will meet in what promises to be an epic battle in front of a worldwide audience.

It shouldn’t take a rocket scientist (or even an expert hockey writer) to predict that the league’s two brightest stars will shine at the Olympics. Ovechkin will be featured in a feared Russian attack that will include Evgeni Malkin, Ilya Kovalchuk, Pavel Datsyuk, and teammate Alexander Semin. Crosby, meanwhile, will have the opportunity to play alongside wingers such as Rick Nash and Jarome Iginla. Ovechkin may be the scorer feared more right now, but remember that it’s Crosby who has the Stanley Cup and who is playing on home soil.

What about the goalies? Martin Brodeur and Ryan Miller may put up stellar performances against opponents like Norway and Switzerland, but expect shooters like Crosby and Ovechkin to dominate once it’s time for the medal round.

There are two players who I really like for the Olympics, and they happen to play on the same team and possibly the same line — Alexander Ovechkin and Ilya Kovalchuk. Russia has a plethora of scoring talent — these two being two of the hottest — which makes it the favourite to win the tournament. The team also has standouts Pavel Datsyuk, Evgeni Malkin, Andrei Markov, Sergei Gonchar, Sergei Fedorov, Alexander Semin, and goalies Evgeni Nabokov and Ilya Bryzgalov. It is going to be very hard to stop this team, but mainly, the offensive pair of Ovie and Kovy.

While Canada’s greatest strength is its depth, I think Team Russia could have the scariest top line if it goes with Alexander Ovechkin, Pavel Datsyuk, and Evgeni Malkin. Even with Malkin and Datsyuk having down years by their standards, I could see that line putting up Nintendo numbers in the Olympics. Another trio that I’d keep an eye on is Joe Thornton, Dany Heatley and Patrick Marleau. I’d still put the Russian line ahead of them in raw talent, but Heatley, Thornton and Marleau already have plenty of experience playing alongside each other and while other players are trying to adjust to new teammates, the Canadian trio will have the advantage of being able to keep it simple and just do what they’ve been doing all season: averaging a combined
3.4 points per game.

If I had to pick one NHL player to dominate though, I’d put my money on Ovechkin. He’ll be extremely passionate when it comes to playing for his country and I don’t think he’ll change his style in the slightest to try to avoid an injury. Ovechkin is remarkably consistent and the NHL’s best player should also be the Olympic’s greatest attraction.

He’s an oldie but a goodie. Martin Brodeur loves big games and the spotlight. I think he’ll blow people away in the Olympics.

Right now, his Devils are struggling. He’s looking to get the taste of losing out of his mouth. Playing behind Team Canada, he’s going to be re-engergized and ready to show the world just how good he is.

But also, you have to think Alexander Ovechkin will relish the opportunity to show up Canada on home ice. He has the ultimate chance to show North America just how great European players can be.

By Steven Ovadia
This entry was posted on Sunday, February 14th, 2010 at 5:09 pm and is filed under HOCKEY, Roundtable, Steven Ovadia. You can follow any responses to this entry through the RSS 2.0 feed. You can leave a response, or trackback from your own site.