The Wire Troll: The Flip Side Of Anger 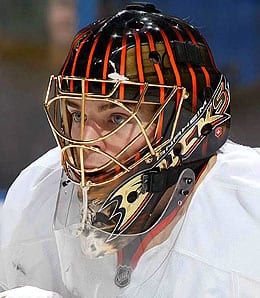 Remember when Jonas Hiller stole the goalie gig for the Ducks? A similar situation is happening in Dallas currently.

For all the Marty Turco fans out there, we get it that you are very sad. Alex Auld has taken the reins for now and who knows when or if Turco will get the starting job back. These are the times that try Fantasy owners and their souls. Remember when J.S. Giguere lost his job to Jonas Hiller last year? I know you do. When these type of adverse situations hit, how do you react? Depending on how you react, you can actually cause further Fantasy damage than you could ever, ever imagine.

This can also happen any time a first line player gets demoted to third or fourth line status. The very impatience of Fantasy hockey owners is what bites them in the caboose later. What becomes worse is those dreaded platoon goalie situations that every owner also dreads. However, what seems like one person’s pain can be another owner’s gain. There is nothing more satisfying than to steal someone’s damaged goods and watch them blossom. It is like the gift that keeps on giving.

So is there any potential signs of players that could be lurking out there on waivers in one of these situations? Well, here are a few to think about on your next extended visit to The Wire Troll. Do not forget to leave a tip where the tip jar once was. Someone stole it!

Players Taking Advantage Of Others’ Shortcomings

Benoit Pouliot, LW, Montreal Canadiens: It seems funny that a guy who could not crack the top six in Minnesota goes to Montreal and turns into a scoring machine. But that is exactly what has happened with Pouliot. He has 11 goals in 15 games as a Hab and that is more than noteworthy, that is impressive. Though Pouliot has only three assists, he is someone you could pick up if in desperate need of goal scoring. Until he develops a more rounded game, the ice time may not increase for a bit, but 15 minutes a night is not bad for him. Keep Pouliot on the radar as some forward options dwindle away. Frankly, you could do much much worse.

Mathieu Garon, G, Columbus Blue Jackets: Yes, Steve Mason is damaged goods this year. I said it. Sometimes I get these things right and if you listened to me, you did not draft Mason in your Fantasy hockey league. Garon’s 2.80 GAA and .904 save percentage is not that impressive, but is effective. Mason owners who cannot handcuff with Garon are going apeshit in some cases because this is the time of year where pickings are slim for netminders. Columbus should ride this wave of consistency while it can because in the Ken Hitchcock realm, you are only as good as your last save at times. Look out below…err…above?

Jochen Hecht, C, Buffalo Sabres: We chose Hecht for our final pick of this week because finally he is getting a little more ice time. His average is up to nearly 17 minutes a night and his 11 points in the last 11 games is a big boost to Buffalo’s balanced attack. My podcast co-host, I am sure, is so happy to hear this as Hecht is streaky. We know this. However, Hecht’s line has gone under the radar all month and they can keep it going while the top line struggles a bit. Expect him to stay on this roll until possibly the Olympic break. Take a look at players like this when shaping your Fantasy team going forward.

What we are going to do next week is very important as we break down our three best Fantasy waiver wire pickups of the year. Right now it is a dogfight between a player from Long Island and a player from the Music City. See next week who they are in The Wire Troll.

By Chris Wassel
This entry was posted on Monday, January 25th, 2010 at 11:15 am and is filed under Chris Wassel, HOCKEY, The Wire Troll. You can follow any responses to this entry through the RSS 2.0 feed. You can leave a response, or trackback from your own site.