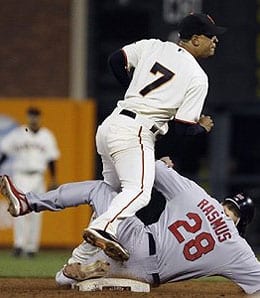 The Giants need speed; could Emmanuel Burriss get enough PT to supply some?

One of the bigger disappointments in 2009 for the Giants had to be the play of Emmanuel Burriss, who won the starting second base job out of Spring Training, but has now found himself so far down on the depth chart that he’s essentially buried.

After beating out Kevin Frandsen for the 2B job, Burriss proceeded to stink up the joint in April. The Giants stuck with him, and he got his act together in May, even taking over the lead-off spot for a while. Unfortunately, that hot streak was short lived and when Burriss went back into a funk in June, the Giants sent him back down to Triple-A. Less than three weeks later, he busted his foot and was done for the season. D’oh!

It’s hard to believe that we had him ranked as high as No. 25 on our pre-season shortstop cheat sheet (he qualified there based on 2008); by season’s end, he was barely a top 60 SS. And he will no longer qualify at shortstop in 2010.

But think about the Giants’ attack. Other than Pablo Sandoval, they didn’t really have a big bopper, and they totally lacked speed, finishing with their lowest number of steals since 2006. That’s where Burriss can help this club – in theory. He has no extra-base pop, and with the addition of Freddy Sanchez (and subsequent extension given to him), Burriss is no longer in consideration for a starting job. But he’s just 24, and has the ability to play both middle infield spots, so Burriss could get some burn as the main back-up infielder (Juan Uribe is likely gone next season) and see plenty of employment as a pinch runner.

Could that be enough for him to have some value? It’s a stretch, no doubt. Burriss’ big problems are a complete lack of extra-base pop and an inability to hit righties. He’s a switch hitter, but perhaps he should just abandon the whole batting left thing, as he managed just a 510 OPS against righties. Of course, that would leave Burriss with an upside of being the weak side of a platoon. Oh boy!

By RotoRob
This entry was posted on Wednesday, November 25th, 2009 at 12:15 pm and is filed under BASEBALL, Fantasy Notes, RotoRob. You can follow any responses to this entry through the RSS 2.0 feed. You can skip to the end and leave a response. Pinging is currently not allowed.