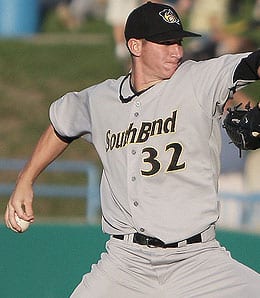 The D-Backs will be without top pitching prospect Jarrod Parker next year.

Has it only been two years since the Diamondbacks last tasted the postseason? Last year, they slipped to 82-80, but were still in the mix for a playoff spot, falling just short of another division title in a weak NL West. This season, however, Arizona plummeted to the division basement, finishing 70-92 – the third-worst record in franchise history.

Personally, I think it was a combination of things: the bullpen lacked a solid bridge from the starters to the closer, especially after some mid-season deals; as strong as the rotation was, the back end was brutal; and the attack was somewhat one dimensional, and didn’t feature enough consistent threats in the lineup.

Obviously the fact that ace Brandon Webb was only able to make one start because of shoulder issues was a deathblow. He’s been an absolute stud in recent years, and removing him from the rotation watered down the back end. The good news is that the team is expected to pick up his 2010 option, and he’ll be healthy and ready to go next year. The return of Webb in and of itself should help get this team back to .500.

Of course, while Zona may get Webb back, it may lose No. 2 starter Doug Davis, a free agent this winter. Davis may re-sign to stay in the desert, but it’s unclear for now. He had a strong first half, but got cuffed around after the break. Davis struggled with home run problems all season long, something that might be helped somewhat with a move away from Arizona (even though 60 per cent of the long balls he allowed this year came on the road).

Worse yet, the club’s top pitching prospect, Jarrod Parker, will miss all of 2010 after Tommy John surgery, taking him out of the mix for the rotation. Parker likely needed another full season in the minors, but he might have been knocking on the door by late 2010. Now, we’ll have to wait at least another year before he’s anywhere near ready to help.

Even without Webb, the front end of the rotation was a strength. Dan Haren hurled 24 quality starts in 33 tries, enjoying yet another superb season and setting a career high in strikeouts along the way.

Davis wasn’t always sharp, but always gave the team a chance to win. And Jon Garland was a workhorse before being dispatched to the Dodgers for infielder Tony Abreu, who will be in the mix for the starting second base job next Spring.

In the bullpen, Chad Qualls was more or less a success in his first full season as a closer, although it was not without its drama as he was quite inconsistent at times. Still, the fact that he only blew five of his 29 save chances (after blowing eight of 17 last year) has to qualify as an improvement. However, Qualls was more susceptible to the long ball and his K/9 slipped – not the kind of thing you want to see from your closer. He did a great job vs. righties (.214 BAA), but lefties hit almost .300 against the righty.

Qualls went down at the end of August with a busted kneecap, prompting the Snakes to turn to untested Juan Gutierrez to close. Gutierrez was a perfect 8-for-8 after Qualls went down, and that may prompt the somewhat budget-conscious D-Backs to deal Qualls this winter. If Qualls is traded, by the way, Fantasy owners need to note that his ERA away from Chase Field was 4.74 this year. Just some food for thought there.

Clay Zavada was a revelation, but after his ridiculously good start, he was vulnerable to the long ball, hurting his second-half results. Still, he showed enough to suggest that he can handle a late-inning role in 2010.

On offense, first baseman Brandon Allen took a big step forward as a prospect this season, showing tremendous power and a great batting eye upon arriving at Triple-A Reno after being acquired from the White Sox in the Tony Pena deal. Unfortunately, that advanced batting eye was a rarity, considering his professional experience so far. Allen is currently in the AFL, trying to work out the kinks as he eyes a potential starting job at first base next season for Arizona.

Over at the hot corner, Mark Reynolds was a monster, enjoying a career year with the dingers and steals, and if you played in some kind of surreal Fantasy league in which strikeouts were a good thing, he was clearly the MVP. Reynolds already held the major league mark for strikeouts in a season (204 in 2008), but he shattered that mark by 19 whiffs this season. How he maintained a BA even as high as .260 is a mystery. That BABIP correction is going to hurt, big guy. Still, he was only big leaguer this season to top 40 homers, 100 RBI and 20 thefts. Sweet.

Outfielder Chris Young had a very forgettable season, and even needed to be farmed out for a while. But he came back at the end of August with a vengeance, smacking over half of his 15 homers in the season’s final four weeks. Let’s hope this bodes well for a recovery in 2010, because let’s not forget this dude was a near 30-30 guy just two years ago.

Another lost year for a D-Back outfielder was had by Conor Jackson, as he contracted Valley Fever virus and played just 30 games. The team is going to see if he can stay healthy in Winter Ball before committing to him for 2010.

Still in the outfield, Eric Byrnes is the highest paid player on the team after signing that ill-fated three-year, $30-million deal in 2007, but he hasn’t been able to stay healthy, and has severely underperformed when active. His future in Arizona is also very much in doubt. The Snakes may try to deal him or buy him out, but will need to eat some coin whatever they decide.

By RotoRob
This entry was posted on Monday, November 2nd, 2009 at 9:52 pm and is filed under BASEBALL, RotoRob, Team report. You can follow any responses to this entry through the RSS 2.0 feed. You can skip to the end and leave a response. Pinging is currently not allowed.