The Wire Troll: Striking it Rich 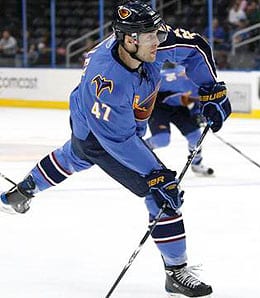 Sure, he will cool off, but right now Rich Peverley needs to be plucked from the wire.

We’ve got a shorter but sweeter edition for you this week. It is that time of year where already in H2H leagues the contenders are rising to the top? This early, you may ask? Yes, they are. Sure there are some surprises, but everyone is looking for those now like they have it on radar. People are being stalkers of the players that will put them over the top now instead of what may come later. I love those guys that come later. Those make the real difference. This week, I heard rumours that we have a few such guys that may be available come later in the season. Keep in mind that these guys are likely on other teams right now, but may be dropped as the season goes along.

Rich Peverley, Atlanta Thrashers: Look, he is going to cool off eventually. When he does, he will be dropped out of leagues faster than Elvis dropped dimes at diners. Seriously, it is nice that Peverley is averaging over a point a game now, but at some point that offense has to dry up some. I see a back and forth type of season from Peverley and come late in the season (when there will not be as much pressure), he will begin to thrive once again. It is okay. Do not be shocked. Some of these are going to ruffle feathers of Fantasy owners right now. That is the whole point.

Marco Sturm, Boston Bruins: Everyone is going to run and get Sturm right now because he is on the first line with all the injuries in Boston (Marc Savard, Milan Lucic, the Pope, etc.). The bottom line is Sturm will get you some points and the significant ice time that goes along with it. However, when the injured players come back, the party will stop! It really is like that jack in the box, folks. Now, as the season wears down to the end, however, you will want a guy like Sturm because of his career numbers. He had some god awful luck last year with injuries, but had 56 points in 2007-08. The potential is there at least.

Justin Williams, Los Angeles Kings: Say it with m: When is the injury going to come? That is perpetually the question with Mr. Williams. Nine points in nine games is great, but let us have a little fun with the following list of injuries. Yes, we go next level here. Thank you TSN.

Basically, with Williams you should have one hand on your mouth and one on the mouse because, sadly, he is almost due to get hurt. When (not if) he does, people will drop him and then, when the time is right (and yes this is like playing Russian Roulette), grab him! He can clearly produce when healthy, a la Tim Connolly. The key phrase here is when he is healthy.

Jason Demers, San Jose Sharks: This kid is the real deal, but with defensemen galore in San Jose, he may fall a bit in the middle of the year. Demers has eight points in 10 games right now. Consider him a rookie that will hit the wall early and rebound later unlike Michael Del Zotto of the Rangers who will hit it much later with little or no time to rebound. That, my Fantasy owner friends, is the difference between being surrounded by really good defensemen and below average defensemen. It’s that simple. Demers will get picked up late in the season because of that reason. Time it right and you have a d-man on your bench that can get timely assists and solid +/- night in and night out.

Ondrej Pavelec, Atlanta Thrashers: He had a bad night on Thursday. Hey, everyone gives up a 190-foot bomb now and then. Eventually, Kari Lehtonen (back, groin, ego) will come back and play pretty well, but then get hurt again. At least Pavelec can stay healthy. His numbers are pretty solid (a .907 save percentage with a goals against just over 3.00). And that includes the Washington game where he gave up five goals on 14 shots. Do not sleep on this guy. He will be Atlanta’s starter again before the stretch run. Count on it and some more solid numbers on the way in. If someone drops Pavelec, keep an eye out.

Next week we will dig up some more waiver treasure. Do not forget to check at least every other day with the waiver wire. You never know what is lurking just waiting to be had. Bye for now.

By Chris Wassel
Tags: Fantasy Hockey, Wire Troll
This entry was posted on Monday, October 26th, 2009 at 10:40 am and is filed under Chris Wassel, HOCKEY, The Wire Troll. You can follow any responses to this entry through the RSS 2.0 feed. You can skip to the end and leave a response. Pinging is currently not allowed.