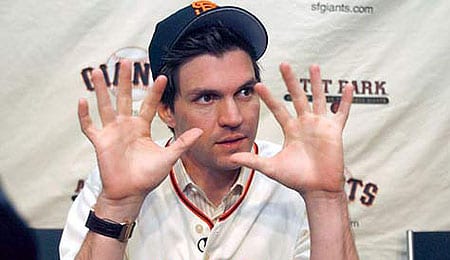 Barry Zito is smart enough to count his win total and shrewd enough to take home $1.85 million for each of those victories.

Who are the most overpaid players in baseball? Conversely, who are the biggest bargains in the game? We decided to examine each camp and have compiled our All Overpaid and Underpaid teams for 2009.

For overpaid players, we factored in the length of the deal to an extent, because in the case of multi-year deals with several seasons to go, some players’ contracts start to really weigh an organization down.

In the case of underpaid players, I only looked at players who are arbitration-eligible, but at the bottom I do make mention of a few who are not yet eligible but deserve special mention. Without further ado, let’s get to it.

Johan Santana, SP, New York Mets: Santana didn’t have an awful season, but he wasn’t nearly as effective as he was in his first year in New York. He spent time on the DL, and considering he makes almost $19 million, he’s got to accept more than his fair share of the disaster that was the Mets this season.

Alfonso Soriano, OF, Chicago Cubs: Soriano is another lightning rod for a team that severely disappointed this season. He missed 45 games this year because of knee surgery, exhibited the worst power since his first full season, endured his lowest BA ever and is no longer a legitimate threat on the basepaths. Hell, Soriano even struggled defensively. All of this for $17 million? No thanks.

Vernon Wells, OF, Toronto Blue Jays: This contract is looking like the biggest albatross in the game, and it’s forcing the Jays to trim costs almost everywhere else because there’s no way they can rid themselves of this deal. And the really big money doesn’t kick in until next season. Wells made less than $5 million this year (which includes the second installment of his signing bonus), which isn’t a huge amount of cash, relatively speaking, but considering his power has been substandard since 2006, and was downright unacceptable this season, and that his BA is middling at best, there’s not much good you can say about him. Sure, he matched his career high in steals, but no one devotes this kind of coin to a basestealer.

Barry Zito, SP, San Francisco Giants: This is another example of a contract that has come back to haunt a team way before it’s even close to being complete. He was actually much sharper this year than he was during his first two seasons in San Francisco, but 10 wins and an ERA over 4.00 for a pitcher that’s earning $18.5 million is an atrocious use of funds.

Manny Ramirez, OF, Los Angeles Dodgers: It’s not as if Manny was awful this year, but the stink of his 50-game PED suspension lingers over his season, and in reality, his whole career. Surely the Dodgers expected more bang for their buck considering they invested $45 million for this season and next to bring him back to La-la land.

Hanley Ramirez, SS, Florida Marlins: The Marlins invested $70 million over six years to buy out his arbitration years and lock him up for another three seasons after that, and this deal already looks like a bargain. He’s just 25 and has already taken over as the best SS in the game, and in fact one of the top hitters in all of baseball. He topped 100 RBI for first time this year, is a power hitter, a major basestealer and won his first batting title. He’s also shown massive improvement in the field, so I wouldn’t be surprised to see him take home his first Gold Glove as well. There is absolutely nothing this kid can’t do on a baseball field, so the $5.5 million he’s earning this year is money seriously well spent by the Fish.

Zack Greinke, SP, Kansas City Royals: Shockingly, the Royals actually did something smart here, locking him up for four years and $38 million. This season, he built on his 2008 breakout and is the odds-on favourite to win the AL Cy Young. That’s a pretty fine return on $3.75 million.

Adrian Gonzalez, 1B, San Diego Padres: Gonzalez could be the most under the radar superstar in the game and he seems to get better every season. And the Padres locked him up before 2007 for four years at a cost of just $9.5 million. He made $3 million this season for putting up his first 40-homer year – a hell of an impressive total in the post-steroid era, he hits for a decent average and has become one of the more patient hitters in the game. And at age 27, he’s just entering his prime power years.

Felix Hernandez, SP, Seattle Mariners: This is probably Greinke’s top competition for AL Cy Young. The Mariners should have tried to sign King Felix to a long-term extension, because his $3.8 million salary is about to explode. He’ll be arbitration eligible again this winter, and while he was a great buy this year, after reaching 200 Ks for the first time, setting a career high with 17 wins and recording an ERA under 2.50, he’s set for a seriously big raise, ensuring that this will probably be the last season we’ll be able to consider Hernandez “underpaid.”

Adam Wainwright, SP, St. Louis Cardinals: The Cards signed him before 2008 to a four-year deal worth $15 million and they have clubs options on him for 2012 and 2013. But after this season, when he struck out over 200 for first time, had an ERA just over 2.50 and just missed out on a 20-win season, if I was Wainwright’s agent, I’d definitely be seeking a more lucrative contact extension for my client this offseason. And when I say more lucrative, I mean astronomical.

Here are some players who were not yet arbitration eligible entering this season, but deserve special mention for outstanding value: Tim Lincecum, Joey Votto (a Canadian boy, to boot!), Ryan Braun, Pablo Sandoval, Jair Jurrjens, Justin Upton and Ben Zobrist.

I also considered Alex Rodriguez for the overpaid list just because – although he hasn’t had a bad year – he’s paid so much more money than anyone else ($33 million this year), that it’s ridiculous. Plus, he’s a twat.

By RotoRob
This entry was posted on Friday, October 16th, 2009 at 11:44 am and is filed under BASEBALL, RotoRob. You can follow any responses to this entry through the RSS 2.0 feed. You can skip to the end and leave a response. Pinging is currently not allowed.