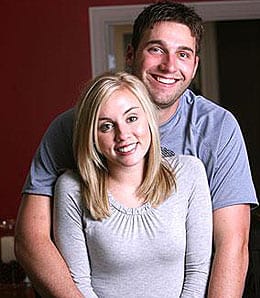 Jeff Francoeur and his cutie wife Catie have something to smile about again now that he’s with the Mets.

Like most people, after last season’s debacle we pretty much wrote off Jeff Francoeur and his once-promising career. An abysmal walk rate that was masked by a decent BA and some developing power was acceptable, but once the BA and pop waned, what was left?

Hell, things got so bad that he barely ranked in the top 80 in our pre-season outfield rankings.

But maybe it’s time to give Francoeur another look, especially since he’s really turned things around since being acquired from Atlanta by the Mets for Ryan Church in July.

Despite the fact that he’s playing through a torn thumb ligament, Francoeur has played very well lately (well, prior to a current 3-for-18 skid). He had an RBI single on Thursday and walked and scored Friday. What’s that? Two straight games with a walk drawn for Mr. Lack of Strike Zone Judgment? Before we get too excited, Friday’s walk was of the intentional variety, so it’s not as if Francoeur suddenly developed some patience.

Despite the lack of plate discipline, Francoeur enjoyed a big August, scoring 16 runs with an 875 OPS, taking his OPS up to 804 since the All-Star break – pretty impressive considering he had a 644 mark beforehand.

He continues to scuffle against righties (676 OPS after 684 last season), but at least he’s exhibited platoon player numbers this year (last season, he managed a ridiculously low 580 OPS vs. lefties, and that, more than anything, prompted me to think he was done; this year, Francoeur has a 774 mark against southpaws).

But what has me intrigued that he’s worthy of a pickup in NL-only leagues and even in deeper mixed leagues is the fact that after struggling along at .250 with no power for the Braves, he’s hitting .295/.324/.489 since joining the Mets. His power has definitely improved since landing in New York and in fact Francoeur’s isolated power is higher than any point since his rookie year.

Overall, owners have to be disappointed in Francoeur. He’s headed for his lowest full-season run total. After looking in Atlanta like he was adding a bit of speed to the mix (in half a season, he had already matched his career high with five steals), he has not swiped a single bag with the Mets.

But before we totally write off this one-time uber prospect, let’s remember one thing: Francoeur is just 25 years old. And the resurgence in his isolated power could definitely be a sign of things to come with his power prime having yet to arrive. That, and the fact that his overall numbers are looking better this season (he’s definitely done better than we projected, likely playing at a top 65 outfield rate), makes me believe that we need to exhibit just a bit more patience with Francoeur. Unless his patience improves immensely, I don’t ever see him being much more than a .275 hitter, but that will be fine if he turns into the 30-35 homer hitter I’m confident he’ll become.

By RotoRob
This entry was posted on Saturday, September 5th, 2009 at 12:08 pm and is filed under Another Look, BASEBALL, RotoRob. You can follow any responses to this entry through the RSS 2.0 feed. You can leave a response, or trackback from your own site.