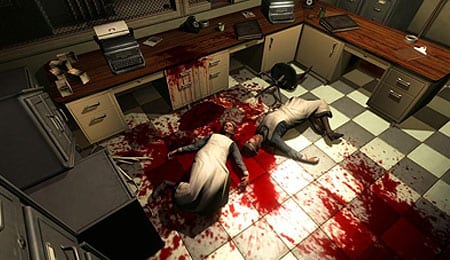 It’d been nearly a decade since the last console release in the Wolfenstein series, but Activision recently dusted off the supernatural shooter for both Xbox 360 and PS3 audiences. Set at the height of World War II, Wolfenstein asks you to thwart another nefarious Nazi plot designed to win the war and conquer the world. The question is, after such a long layoff, does Wolfenstein still hold up as a viable shooter in an increasingly overcrowded genre?

Wolfenstein’s controls will feel familiar to anyone who has played the Call of Duty series as they share many of the same commands. The LT looks through the sights and the RT fires your weapon. Clicking down on the left stick causes you to sprint, while clicking down on the right stick will execute a melee attack. You can also reload (X), jump (A) and crouch (B) — the Y button interacts with doors and other objects. The left bumper throws your grenades and the right bumper causes you to switch weapons (hold it down to access all your guns, tap it to switch to your last weapon).

You’ll also be using the D-Pad to utilize your Veil Powers, which are augmentations that grant you special abilities. There are four total powers, each of which are activated by pushing the D-Pad up, down, left or right. Lastly, the back button brings up your journal, which contains your map, objectives and other information. For the most part, everything works well and quickly becomes second nature.

The single-player campaign in Wolfenstein sports a distinct look as the designers have done a very nice job of mixing World War II settings with sci-fi elements. The levels vary quite a bit from one to the next, and there are some real eye opening locales. Wolfenstein even manages to create some genuinely creepy moments, a feat easier said than done when your character is packing such a large arsenal. There are a ton of little details worked into the environments, which unquestionably represent the highlight of the game visually.

The town of Isenstadt, which serves as your base of operations, and its surrounding areas are home to plenty of enemies and allies, most of which look solid. They don’t do anything to push the envelope with what the current generation of systems can do, but they by no means detract from the experience either. Unfortunately, the graphics take a hit when venturing online. The maps and environments still look pretty good, but the character models are blocky and lack variety.

One thing the game does very well with its characters is their reactions to being shot or stabbed, which is important when you’re pushing the death toll north of 1,000. Shoot a Wehrmacht soldier above you and watch him tumble over the railing to his untimely demise. Pop one in the neck and he’ll grasp for his throat. And just wait until you unleash some of your more “exotic” hardware, when Nazis are literally blown to pieces right in front of you. It’s unrelentingly satisfying.

When it comes to the audio, all the basics are covered. The soundtrack is good at setting the mood, and the sound effects do a fine job of making you feel like you’re in the middle of a battlefield. Where I could see divergent opinions is when it comes to the voiceover work. As I made my way through the game I found myself thinking of a movie review for Operation Valkyrie where they touched on the decision to speak the lines in American or British accents. In the case of Wolfenstein, they’ve chosen to go the opposite route and have all the Nazis speak English with a German accent. I thought it was fine, but I’m sure some will find the voices to be little more than caricatures.

Wolfenstein begins by sending your character, B.J. Blazkowicz, to the fictional town of Isenstadt to meet up with a resistance group fighting the Nazis, who are once again delving into the occult in the hope of finding a weapon to turn the tide of the war. Things go awry almost immediately, however, as the Nazis have gotten wind of your arrival and assembled a welcoming committee to meet you once you disembark from the train. And with that, Wolfenstein hits the ground running with combat going hot and heavy throughout most of your time with the game. That doesn’t mean this plays exactly like every other shooter out there, though, as there are actually some different elements at work.

One of the first things you’ll notice is that missions don’t flow one into the next. Instead, Isenstadt will serve as a hub for Blazkowicz. He’ll meet up with different factions, accept missions — both primary and optional — and hunt for hidden goodies around town. This approach gives the game a bit of a non-linear feel to it, though you’ll still need to clear certain missions before unlocking others. Plus, the actual missions themselves are quite linear, and in fact you’ll be guided forward throughout the game by a marker on your compass that shows you what path you need to take.

There are 15 missions in all for Blazkowicz to plow through, and the game does not disappoint when it comes to the action elements. You’ll start off equipped with just a couple traditional WWII guns and no supernatural abilities, but as you progress you’ll acquire some advanced weaponry and access to the Veil powers. Basically, the Veil is a parallel dimension that you’re able to enter at any time. Within this mode you’ll be able to reach points you couldn’t otherwise, as well as see enemies more clearly (it works as a sort of default night vision in darker areas) and pinpoint weak spots.

While not necessarily original, your Veil powers are fun to use and make for some cool effects. Beyond the basic Veil sight detailed above, you’ll also have the ability to slow time, shield yourself from attacks and empower your weapons with other-worldly force. Each power is upgradable, as are your weapons, but to do so you’ll need to be keeping a sharp eye out for the many collectibles in the game.

The collectibles are broken up into three categories: gold, intel and tomes. The gold is needed to buy weapon and Veil upgrades from the black market. As in the real world, this precious commodity is not readily obtainable, which means you’ll need to pick and choose what to upgrade. Intel helps to flesh out the story, but more importantly it unlocks the ability to purchase certain upgrades. Tomes, meanwhile, are needed to increase the amount of Veil energy you can store. It’s a cool system, and one that encourages exploration throughout the mostly linear missions.

In addition to supplying Agent Blazkowicz with a nice variety of killing utensils, Wolfenstein also provides our hero with an impressive list of enemies to deal with. You’ll begin with the basic Wehrmacht, but you’ll soon be tangling with the S.S. and a nasty collection of Veil-infused Nazi super-soldiers. My favourite of that group were the dual-blade wielding Assassins, who are very fast and invisible to anyone outside of the Veil. They can be quite deadly in close quarters, and their voices are possibly the creepiest in the game.

From start to finish you can expect to put at least eight hours into the campaign mode and substantially more if you’re intent on finding all the collectibles without the benefit of a guide. It took me north of 11 hours to finish the campaign, and I was nowhere close to having 100 per cent of the items. One nice thing is that you can replay any mission you’ve previously passed at any time, which alleviates the need to find everything the first time through. There are also four difficulty levels to choose from.

Much like the graphical presentation, however, things once again head south when venturing online for multiplayer action. You begin by either selecting the quick play option or loading a lobby where a list of available games will appear. There you’ll be able to select a game based on map, game type or other factors (such as lag). Wolfenstein comes with eight multiplayer maps but just three modes: Team Deathmatch, Objective and Stopwatch. The most interesting mode is stopwatch, which challenges each team to complete tasks in a set amount of time, and whichever team does it the fastest wins.

Once you enter a game you’ll be choosing from one of three classes (soldier, medic and engineer) along with which side you want to play on and which weapon you’d like to use. The game does not offer auto balancing, and it also allows players to switch teams at any time during a match. As you play you’ll earn gold for things like shooting your enemies, healing teammates and accomplishing objectives. The gold can then be used to purchase upgrades just like the single-player mode. I do like the way the game awards gold. It recognizes your efforts better than a straight kill/death ratio as here you’ll earn more gold for taking the first 95 per cent of someone’s health bar rather than the guy who comes along later and finishes the job to earn the kill.

When the host has a good connection the multiplayer action is generally enjoyable, tending to be fast and furious with brief re-spawn timers and medium sized or smaller maps. However, I also ran into some games with debilitating lag where the host enjoyed a tremendous advantage. Also, like the Call of Duty games, the more experienced players have the better equipment, which means you better be ready to pay some dues to afford your own upgrades.

If you’re one of those people who only purchase a shooter for the online play, Wolfenstein may not offer enough to hold your interest. On the other hand, if you’re someone that enjoys a quality single-player experience, Wolfenstein offers one of the more engaging campaign modes I’ve seen from an FPS in some time…not to mention the undeniable fun that comes with melting Nazis!

By Herija Green
This entry was posted on Friday, September 4th, 2009 at 4:19 pm and is filed under Herija Green, Video Game Reviews. You can follow any responses to this entry through the RSS 2.0 feed. You can skip to the end and leave a response. Pinging is currently not allowed.