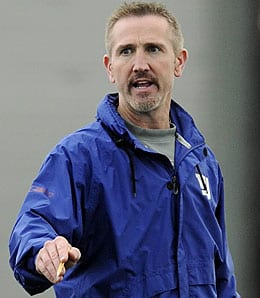 Steve Spagnuolo plans to make the Rams a tougher team.

We’re back with more of the 2009 RotoRob NFL Draft Kit with yet another team preview (we’re nearly done now, with just a couple of
teams to go). We’re going to try to shoot out all these team previews and then start releasing the kit’s other goodies (cheat sheets, sleepers/busts lists, etc.). While we wonder if the St. Louis Rams bottomed out in 2008 — much as we wondered if they had bottomed out in 2007 — how about Larry Fitzgerald suggesting his own team was “mediocre” last season?

After Week One, it was pretty clear that along with the Chiefs and Lions, the Rams were going to redefine bad football. While the Lions forged ahead as the worst of the bunch, the 2-14 Rams gave them plenty of competition. Marc Bulger and the Rams offense finished tied for 30th in points scored, averaging a measly 14 points per game; and only the Lions allowed more points per game than the Charmin-like Ram defense (29 per contest). St. Louis trailed early and often and it dragged the offense into the toilet.

The Rams made a change at the top by bringing in former Giant defensive coordinator Steve Spagnuolo as their new head coach. The Rams also shed plenty of age in the personnel department. Torry Holt, one of the last links to the Greatest Show on Turf Rams, was released; the same fate met former All-Pro offensive tackle Orlando Pace; and other vets such as quarterback Trent Green, safety Corey Chavous and receiver Drew Bennett were let go. The message was simple: out with the old and in with the new.

St. Louis’ offensive line has been an abomination over the past few seasons. In ’08, they allowed 45 sacks — amongst the worst in the NFL. Thus, it was an easy choice to select offensive tackle Jason Smith. The D received much of the attention during the draft as the Rams went with defense for its next three selections including former Ohio State linebacker James Laurinaitis in Round Two.

Bulger’s career is becoming a broken record over the past few years. Someone on the offense gets injured, leading to the unit’s (his especially) complete meltdown. While Bulger made 15 of 16 starts, he didn’t get much done because of offensive line problems and the decline of Holt. For the second straight year, he posted a passer rating barely above 70. He has peaked as a quarterback. At 32 years old with an injury- riddled past, don’t look for him to emerge as Fantasy star at this point of his career. Clearly, he is a backup on Fantasy rosters. Oh yeah, and Kyle Boller is his backup. I’m sure that made your toes curl.

Steven Jackson is what you might call a cursed back. He’s the guy that has the phrase “if everything goes right…” attached to him and for good reason. If offensive linemen aren’t hurt, he’s injured. If he’s not injured, then the quarterback is injured. If everyone is healthy, then the team is trailing by four touchdowns. While Jackson is still young (26), he needs to stay on the field. He has missed eight starts over the last two seasons combined and for all of the Fantasy fuss over him, he just has one season over 1,100 yards to his credit. He possesses tremendous upside and could be a top five guy if everything goes right. Don’t worry, though, it wont. Consider Jackson a second rounder.

Name the Ram receivers right now. Do it. You can’t? Well, that’s acceptable considering their top three guys could be Donnie Avery, Keenan Burton and Laurent Robinson. The team acquired former Raider Ronald Curry to add some of the speed and veteran presence they’ll miss with the departure of Holt. Avery is most likely to produce right away in his second year and easily owns the best Fantasy value of any Ram receivers. He can be a deep threat, but with the team employing a variation of the West Coast offense, getting throws downfield might be tricky. This group will be a work in progress. Outside of Avery, don’t expect much from the rest of the bunch.

Despite the receiver woes, Randy McMichael does offer the Rams a decent pass catching tight end. He is by no means Jason Witten, but he’ll get opportunities in the red zone and probably snag a few touchdowns during the season. Keep him as a second string tight end. Meanwhile, if you’re searching for the name of back-up tight end Joe Klopfenstein, that’s a sign your team is probably in trouble.

As explained earlier, the Ram defense left a little to be desired in 2008. Struggling to stop the run or the pass, the Rams failed to generate a pass rush (Leonard Little and James Hall led with six sacks apiece) and did not stop the run (allowed 26 rushing touchdowns, while finishing 29th in rush defense). Second-year end Chris Long needs to produce and give the team a fighting chance upfront. Overall, the Rams should get a boost with the arrival of Spagnuolo who will least make them a bit tougher. However, don’t even think about adding this group to your Fantasy roster.

By Derek Jones
This entry was posted on Saturday, August 1st, 2009 at 10:24 am and is filed under 2009 RotoRob NFL Draft Kit, Derek Jones, FOOTBALL, Team report. You can follow any responses to this entry through the RSS 2.0 feed. You can skip to the end and leave a response. Pinging is currently not allowed.