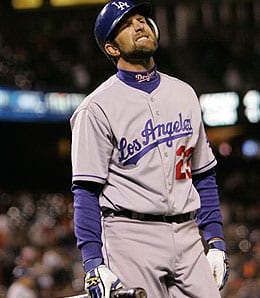 Casey Blake is likely headed for a career best in RBI, but an 0-for-4 performance Sunday has lengthened a recent slump, making me feel he is a fringe Fantasy third baseman in standard sized leagues now.

In his past seven games, Blake is 4-for-25 with eight strikeouts, dimming what had been a very good July up until about a week and a half ago.

Overall, it’s been a solid season for the veteran, and even though his 12 dingers has him tied for second on the Los Angeles Dodgers, Blake is not a feared slugger by any means.

He remains a productive run producer (possibly on his way to his first ever 100 RBI season), but he’s never been much of a base stealer, hits for pedestrian batting averages, and doesn’t really hit enough homers to compensate for the rest of his game.

There are certainly worse options at third base, but if you’re in a 12-team mixed league, he’s pretty well the worst starter you can have, and may be better suited to act as a backup in most cases. In mixed leagues smaller than 12 teams, go ahead and dump Blake.

By RotoRob
This entry was posted on Sunday, July 19th, 2009 at 11:14 pm and is filed under BASEBALL, Daily Dump, RotoRob. You can follow any responses to this entry through the RSS 2.0 feed. You can leave a response, or trackback from your own site.