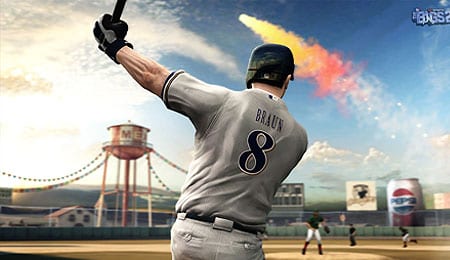 Simulation fans may want to avert their eyes as 2k Sports’ recent release, The Bigs 2, makes no bones about being an over-the-top arcade experience in the tradition of old school games like NBA Jam and NFL Blitz. The original, released roughly two years ago, was an enjoyable title and anyone familiar with it should have no trouble picking up the sequel. That’s not to say that The Bigs 2 hasn’t added more modes, features and a slew of mini games to the package, but the overall experience remains the same. Unlike some franchises, however, there’s enough new here that it doesn’t feel like a glorified roster update.

The control scheme for hitting is basic as you choose between power (B) and contact swings (A). You can also bunt (X), while stealing is tied to the Y button — press once to lead off and a second time to steal. If you have enough turbo stored up, pressing the right trigger activates it, giving you increased power or speed depending on when you press it. When running the bases you can take control of any player by pressing the corresponding button and tell them how far to advance with the left stick utilizing the baseball diamond as a guide (press up run to second, press left go to third, etc.).

Things stay simple on the bump as you move the cursor to the desired location and pick one of the four face buttons to throw your pitch. You’ll need to hold down the button until the meter fills to the top and release it. If you do it perfectly you’ll be rewarded with a more effective pitch, but if you end up in the red you’ll “tip” your pitch so the hitter will see its location and know whether it’s a ball or a strike…and if it is a strike, expect your opponent to hit the mistake a long way. It’ll take some time to get the hang of it, but once you’ve got it down you’ll find yourself throwing perfect pitches more often than not.

Surprisingly, you’ll find the most complex controls reserved for fielding, specifically the laundry list of mini games associated with the various “legendary catches.” The game will let you know when these are available, prompting you to press A to initiate the mini game. For instance, one mini game requires you to hold a button down and release it at a specific time while another has you entering a sequence of buttons before time runs out. It definitely varies the experience and requires some skill, though at times it feels overdone.

Much like the game play itself, the graphics in The Bigs 2 are over the top. The player models look like Steroids Era professional wrestlers and their animations reflect that same larger than life approach. Home runs are launched into the stratosphere, knuckleballs zigzag back and forth and outfielders fire the ball from the warning track to home plate on the fly in a matter of nanoseconds with the obligatory smoke trail to boot.

For the most part, the players are easily recognizable, which is something you couldn’t always say for the previously released MLB 2k9, and the frame rate moves along crisply. In fact, my only real complaint comes when playing night games as the field looks like half the lights at the stadium have mysteriously gone out. It’s distractingly dark and takes some getting used to. Of course, in many game modes you get to pick day or night game so it’s not that big of a deal.

As for the audio it’s more of a mixed bag, specifically the commentary. It’s not that the announcing is bad as there are some funny lines, but since this is an arcade-style game you’ll be getting a lot of at bats in every game, and it won’t be long before you’re hearing the same things over and over again. Like the first game, it’ll be the fielding lines you’ll hear most often since there are seemingly a half-dozen or more “legendary catches” per game, and after about 75 per cent of them you’ll hear a reference to Ozzie Smith. Also, the announcer refers to some of the MLB legends by nicknames, which in some cases make sense (Smith as “The Wizard” for example) but in others do not (Edgar Martinez announced as “The Mariner”). The strangest to me was the referring of Albert Belle as simply “Joey,” which of course was his nickname when he broke into the majors, but one he loathed being called once in The Show.

As with the original, the primary single-player mode — entitled “Become a Legend” in the sequel — is built around creating a player and taking him to the top — in this case, Cooperstown. The back story is that your player is coming off a serious injury and has to work his way back, starting with a rehab stint in Mexico. You’ll begin with all of your skills at a very low level and improve by beating teams and unlocking mini games to boost yourself in one of five categories: contact hitting, power hitting, fielding, throwing and running. The order in which these unlock is predetermined.

In Season One you’ll face some of the league’s worst teams, engaging in three-game series. The first two games will have specific challenges (i.e., drive in two runs with your created player), while the third allows you to “steal” a player from the other team by beating them in a five-inning game. This is identical to the “Rookie Challenge” mode in the original, though this time you’ll only be allowed to activate three of your stolen players per game. I think that’s a good move as it keeps you from creating an unbeatable club, though I don’t like that the CPU decides who’s removed from your lineup.

As the seasons move along, you’ll face better teams while also squaring off against teams of Hall of Famers with accompanying challenges. Your ultimate goal is to accumulate enough HOF points to gain admittance into Cooperstown. Unfortunately, the game’s challenges become more and more difficult to accomplish, which would be more forgivable if they were purely skill based, but they’re not. The worst offenders without question are the fielding challenges as you have no control over where your opponent hits the ball. That leads to scenarios wherein you’ll win a game 12-1, but can’t advance to the next game because your player didn’t throw out enough runners or make enough legendary catches. Needless to say, it can be incredibly frustrating and will certainly weed out some of the less determined players before they reach the mode’s conclusion.

To its credit, 2k Sports did add a single-player alternative to The Bigs 2, giving gamers a chance to play through an entire season with their created team. One thing worth pointing out for those interested in playing a full season is just how outdated these rosters are. For instance, the Pirates still have Nate McLouth, Nyjer Morgan, Eric Hinske and Craig Monroe. 2k Sports says there will be a roster update, but those without Xbox Live will have to make do. Also of note, trades are not based on player ratings or anything like that. Instead, you amass “trade power” by playing games, which allows you to propose a trade (one-for-one only). This then initiates one of a series of mini games — like slots or a spinoff of Memory where you match cards — and if you’re successful the trade happens. That means if you want to deal David Eckstein for Hanley Ramirez, you can pull it off.

Beyond the two primary modes, Home Run Pinball also makes a return, and this time it branches out into four areas. The concept is simple: hit the ball into buildings, cars and whatever else is available to earn points. It’s a fun distraction and a nice little time killer. There are also four mini-games (power, contact, fielding and speed), which range from enjoyable (power) to overly contrived (speed).

For those that prefer a more social experience, The Bigs 2 offers multiplayer both on- and offline. The online mode allows you to join a quick match or designate preferences before searching, but it also features a lobby where you can view other players, create your open room where you set the rules (which amounts to an open challenge) or join another player’s room to start a game. The game tracks your stats, the most important of which is games played versus games completed as the biggest problem I encountered was people quitting. Unfortunately, if your opponent quits you aren’t given a win, even if you’re winning 10-0 with only one out left to get. As for the performance, things generally ran smoothly though I did encounter some occasional lag.

Although there are unquestionably frustrations as you progress deeper in the “Become a Legend” mode and some of the mini games feeling unnatural in placement and design, this is a strong title and a great pick-up-and-play option for those that like to sit around and talk trash with their friends. If you liked the original, getting the sequel is a no brainer while those looking for a fun experience that’ll provide many hours of enjoyment should consider adding The Bigs 2 to their collection as well.

By Herija Green
This entry was posted on Saturday, July 18th, 2009 at 8:10 pm and is filed under BASEBALL, Herija Green, Video Game Reviews. You can follow any responses to this entry through the RSS 2.0 feed. You can skip to the end and leave a response. Pinging is currently not allowed.