Can Rookie Get Past his Seattle Issues? 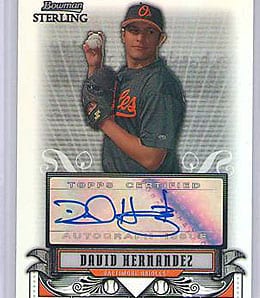 David Hernandez is sure to be better Wednesday than he was his first start in Seattle.

The Baltimore Orioles will send David Hernandez to the mound Wednesday afternoon as they look to take the rubber match in Seattle. The O’s have struggled recently, winning Tuesday to snap a three-game skid, but somehow (despite being 10 games under .500) have managed to pull within 4.5 games of the fourth place Jays, setting up a battle for the AL East basement this weekend when Toronto visits B-More. How exciting!

To say Hernandez didn’t fare well in his first start at Safeco Field is an understatement, as just over a month ago in Seattle the rookie suffered the worst beatdown he’s experienced in his brief career. However, he’s looked sharp in two of three outings since then, more or less justifying our recommendation of him after his fine debut in late May.

I still submit that Hernandez makes for a decent AL-only pickup, and he definitely looked solid Friday in Los Angeles, squaring his record and lowering his ERA to 4.15 by holding the Angels to six hits and three runs over 6 2/3 IP.

The fact that Seattle is among the AL’s worst-hitting teams (although in the Mariners’ defence, they’ve been better lately) makes Hernandez a good candidate if you need a spot starter in a daily league.

In the bullpen, inconsistent Matt Albers, recalled in late-May after the O’s ditched Adam Eaton, looked extremely sharp last month, but took the loss Sunday when he got ripped by the Angels for three runs in two-thirds of an inning. To his credit, Albers bounced back Tuesday with a perfect frame to record his fifth hold.

He’s been getting a longer look this season, but his results haven’t been as promising, so at this point, I’d just put him on the watch list to see if he can carve out a more important role in the O’s pen. I mean, remember how hard Albers got hit earlier in the season; in fact, it was a relief when he was farmed out after that crappy start.

Set-up man Jim Johnson got dumped in a few AL-only leagues after getting scored on in back-to-back outings last week, but don’t forget how brilliant he was in June, recording a 0.75 ERA. He’s been a real workhorse in the Oriole pen, and is headed for career highs in games and innings pitched. I like the fact that his K/9 is up, but it’s still far short of dominant, and he’s been easier to hit this season. In our most recent reliever rankings he made the top 75, and it wouldn’t surprise me if he ranked higher the next time we review that list as Johnson still retains plenty of value in leagues that track holds.

Finally, closer George Sherrill, an All-Star in 2008, was absolutely brilliant over the past two months, leading us to believe his job was safe. Now, the fact that he’s been scored on in two of his three appearances this month is worrisome, but not to the extent that I feel he’s going to lose his closing gig to another Oriole reliever. Of greater concern, as the O’s continue to lose ground on the true contenders in the AL East, are the rumours that Sherrill may be dealt to a contender, and if this happens, he could easily wind up in a set-up role, something I still believe he’s better suited to do.

If I owned Sherrill, I might kick some tires on the trade front. Talk up the fact that he’s been a real workhorse and if the other owner is worried about Sherrill’s declining K/9, counter with the fact that his walks have dropped even more significantly, hence his vastly improved command – a much better barometer for pitcher success.

By RotoRob
This entry was posted on Wednesday, July 8th, 2009 at 2:23 pm and is filed under BASEBALL, RotoRob, Team report. You can follow any responses to this entry through the RSS 2.0 feed. You can leave a response, or trackback from your own site.