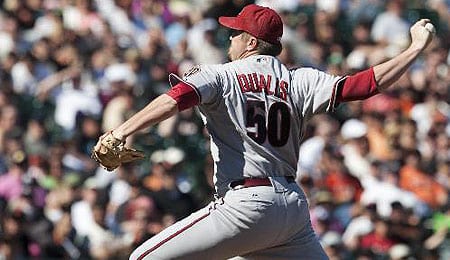 Chad Qualls could be on shaky ground as the D-Back closer.

This week, Todd checks in on the bullpen situations in the National League.

The Man: Chad Qualls. Qualls went though a rough couple of weeks at the end of May and beginning of June and appeared to be on shaky ground. Thanks to that rough patch, his numbers are not sparkling, with an ERA of 4.39. Qualls would probably be on a shorter leash if someone in particular were chasing him.

Keep an eye on: Tony Pena. Pena’s got a live, good control and is one of the best set-up men in the majors today. If Qualls falters, Pena is next in line, but neither man has been exactly sharp lately.

The Man: Mike Gonzalez and Rafael Soriano. Bobby Cox has decided to go with a two-headed monster at closer. So far it’s worked well for Atlanta, but is sure to drive Fantasy owners nuts. Both Gonzalez and Soriano have power arms and both are prone to injury. It’s not out of the realm of possibility that one falls out of Cox’s favour, but as long as the two closer strategy is working, he’s going to stick with it.

Keep an eye on: The other guy. While Soriano has the better numbers, Gonzalez has been no slouch. No telling if one guy will start to emerge over the other. Both players should be owned in all leagues.

The Man: Kevin Gregg. It was a huge upset when Lou Piniella named Gregg as the Cub closer this year. Gregg has rewarded Piniella with a solid campaign thus far. While his numbers aren’t superhuman (did you check out his latest outing?), he does have 11 saves and his main competition hasn’t exactly torn it up.

Keep an eye on: Carlos Marmol. Marmol pissed off a lot of Fantasy owners when he lost the closer job in Spring Training and has battled control problems all year. Thanks to all those walks, his WHIP stands at an unsightly 1.49. Marmol is worth keeping an eye on because of his outstanding potential, but unless he regains his 2008 form he’ll be stuck in setup.

The Man: Francisco Cordero. Cordero has been money all season for the medirocre Reds. With an ERA hovering around 2.00 and only one blown save, you couldn’t ask much more from your closer.

Keep an eye on: David Weathers. The 16-year veteran continues to be a reliable arm out of the pen. He’s not outstanding at anything and doesn’t blow batters away, but Weathers knows how to pitch and pitch well. If anything happens to Cordero, Weathers is next in line.

The Man: Huston Street. First is was Street, then it wasn’t, then it was again. In his second go around as the closer, Street has taken hold of the job and it looks like he doesn’t plan on relinquishing anytime soon. As the Rockies have gotten hot, Street has gotten more opportunities and capitalized on them. He’s safe – for now — and even the trade talks surrounding him have diminished as the Rox have worked their way back into the race.

Keep an eye on: Manny Corpas. I feel a little foolish advising you to keep an eye on Corpas. He was awesome in 2007 and looked like a keeper, but really hasn’t shown much since then, and is currently on the DL. Corpas was a hot commodity coming into the season but has done nothing to back it up. Still, if Street falters or gets injured, Corpas will most likely get the call. While Corpas is hurt, I’d be watching Joel Peralta — he’s looks incredibly sharp since getting promoted last month.

The Man: Matt Lindstrom. Lindstrom is like the armpit of closers. His numbers really stink, but he still has the job – as shaky as it is. If the Marlins could make a move, they probably would, but right now Lindstrom’s main competitors are hurting, so he won’t have to use those naked pictures of manager Fredi Gonzalez as leverage just now.

Keep an eye on: Leo Nunez is the heir apparent to the closer role should Lindstrom tank and he’s been a key part of the bullpen, but is currently hurting. He’s reached double digits in holds this season and is among the league leaders in that category. Dan Meyer could worm his way into this situation very easily.

The Man: Jose Valverde. If you invested heavily in Valverde this season you have to be cursing your luck. But after nearly two months on the DL, he is finally back closing games. He’s been one of the best in the league the past two years, with 40+ saves in each season, so to lose him for that long really smarts.

Keep an eye on: LaTroy Hawkins. Odds are you were pretty desperate if you went out and grabbed Hawkins when Valverde went down. Face it, that guy has had some brutal years. But you were rewarded for your gamble as he punched out nine saves for the sad sack Astros.

The Man: Jonathan Broxton. Though he’s had a rough couple of outings lately (and a toe woe may be the culprit here), Broxton is one of the elite closers in the game. With his excellent stuff and pinpoint control, there’s nothing short of an injury that’s keeping him from closing in LaLa Land.

Keep an eye on: Ramon Troncoso. The Dominican has been money this season, picking up the occasional save when Broxton hasn’t been available. If you’re a Broxton owner and have the roster spot, Troncosco is worth adding.

The Man: Trevor Hoffman. The all-time leader in saves has turned out to be a great signing for the Brew Crew. Despite starting the season on the DL, Hoffman has made up for lost time with 16 saves. He’s looked like the dominant Hoffman of old with an ERA well under 1.50 and a microscopic WHIP. The brats are obviously agreeing with Hoffman, who apparently has found the Fountain of Youth in Milwaukee.

Keep an eye on: Todd Coffey. The one-time Reds closer flamed out in that role pretty quickly. He’s earned a second chance in Milwaukee and made the most of it, ranking among the league leaders in holds and grabbing one save. Note that Coffey has been touched up a bit lately, so a deeper sleeper worth tracking in the Brewer pen is Mitch Stetter.

The Man: Francisco Rodriguez. New York knew what it was getting when they signed K-Rod to a big money contract this offseason – and he’s delivered. Sitting at the top of the league in saves with an ERA and WHIP just touching 1.00, Rodriguez has shown he’s worth the money.

Keep an eye on: Pedro Feliciano. Feliciano has had to assume a bigger role in the Mets bullpen with the injury to J.J. Putz. He’s been particularly tough against lefties, holding them to hit a measly .155. Bear in mind, however, that the Mets have had to rely on Feliciano a bit too much lately, so there’s a concern how long his arm will hold up.

The Man: Brad Lidge. Lidge is expected to be activated from the DL some time this week (perhaps Wednesday) and will probably reclaim his closer job. The Phillies obviously appreciate the job Lidge did last year when he was a dominant closer because loyalty is the only way to explain how he has kept his job this season. He’s been brutal this year with an ERA well over 7.00. Maybe it was his bad leg and he’ll come back and be lights out. Or maybe not. Watch this one closely.

Keep an eye on: Ryan Madson. Madson did his best Lidge imitation while the real deal was on the DL – and pitched like crap. He blew a couple of saves, took a couple of losses and made everyone forget just how bad Lidge was before he went on the DL. But, Madson is still the No. 2 guy in the pen. If Lidge can’t get the job done or isn’t healthy, Madson will get another chance, but probably be put on a short leash. If you’re looking for deeper options, J.C. Romero was activated from the DL a couple of weeks ago, and has always been nasty on lefties. This year, in limited action, he’s been pretty darned tough on righties too.

The Man: Matt Capps. Capps hasn’t exactly lit the closing world on fire despite racking up 16 saves. A rough patch at the beginning of May has his numbers looking pretty sad, but he’s been pretty good since then.

Keep an eye on: Sean Burnett. The one-time promising starter has emerged as a steady presence in the Pirates bullpen. While he’s not a great strikeout pitcher, Burnett relies on control to get him through innings, unfortunately, he doesn’t have much. Command has been an issue for Burnett since he reached the majors. Still, opponents are batting barely over .200 against him in June, so obviously he’s doing something right.

The Man: Heath Bell. It’s not easy to follow in the footsteps of a legend and future Hall of Famer, but Bell has done just fine, thank you. He leads the league is saves and has a sparkling ERA and WHIP.

Keep an eye on: Edward Mujica. Mujica wasn’t exactly well thought of even in middle relief terms coming into the season, but he’s working on an excellent year in setup, looking especially untouchable in May. He looks to be next in line should Bell get hurt.

The Man: Brian Wilson. Wilson hasn’t allowed an earned run in over a month. His numbers now are the best of his career and he’s looking like one of the top closers in the game, earning himself a long leash with the Giants.

Keep and eye on: Jeremy Affeldt. The one-time Royal closer has had an excellent season by the Bay. He’s among the league leader in holds and has an ERA of 1.65 and a decent WHIP.

The Man: Ryan Franklin. When Jason Motte imploded to begin the year, the veteran Franklin came to the Cards’ rescue and has pitched like he never wants to relinquish the role. With 17 saves and ridiculously low ERA and WHIP numbers, Franklin has been one of the best bargains in Fantasy baseball this year.

Keep an eye on: Chris Perez. While Motte won the job out of Spring Training, it’s Perez who should be looked at as the closer of the future. After starting the year in the minors, Perez has come back and clearly out-pitched Motte, although he’s been shakier lately. Perez should be next in line.

The Man: Mike MacDougal, Yeah, this is the guy that got cut by the White Sox a couple of months ago. That kind of tells you how bad things have been for the Nationals and their beleaguered pen. Joel Hanrahan was terrible in the role and the rest of the Nat bullpen seemed to follow his lead and were equally terrible. So, for now, MacDougal’s the man – until he isn’t.

Keep an eye on: Nobody. Save yourself the pain. Don’t try to figure out the Nationals pen. It will just cause you undue stress. But if I have to watch someone, Joe Beimel has looked very sharp lately after he got pounded like a prison bitch last month.

By Todd Habiger
This entry was posted on Wednesday, June 24th, 2009 at 10:03 am and is filed under BASEBALL, Saving Grace, Todd Habiger. You can follow any responses to this entry through the RSS 2.0 feed. You can leave a response, or trackback from your own site.