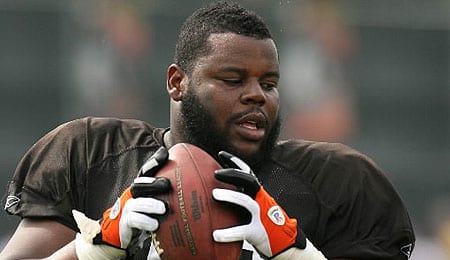 We’re back with more of the 2009 RotoRob NFL Draft Kit for you today with yet another team preview. We’re going to try to shoot out all these team previews and then start releasing the kit’s other goodies (cheat sheets, sleepers/busts lists, etc.). While you watch six-time Pro Bowler La’Roi Glover ride off into the sunset, you can read about how the Browns are looking to rebound from a forgettable 2008 season.

When you go 4-12, obviously not much went your way. I guess saying Brady Quinn finally saw the field could be considered something positive – except that he promptly got hurt, which throws it into the what when wrong category. Jamal Lewis rushed for 1,000 yards – though it was a weak 1,000 yards. Uh, nobody died of a staph infection. That’s always good.

The expectations were high for the Browns going into 2008. They were coming off a highly successful season which they went 10-6 and barely missed the playoffs. Derek Anderson, who looked so good in 2007, looked so bad in 2008. As mentioned, Quinn took over at quarterback and then got hurt. Braylon Edwards regressed and looked nothing like the stud of 2007. Lewis couldn’t come close to duplicating his 2007 comeback, and with a 3.6 yard average rush, was a disappointment. The Browns brought in Shaun Rogers to bolster the defense, yet the unit again ranked near the bottom of the league. Kellen Winslow, Jr. contracted a staph infection and missed several games, and then was dealt this offseason.

The Browns traded down in the draft several times before finally landing C Alex Mack out of California to help solidify the middle of the line. In the second round, the Browns grabbed a pair of wide receivers in Brian Robiskie and Mohamed Massaquoi. Robiskie, the son of Atlanta WR coach Terry Robiskie, has got excellent hands and is a great route runner. Some scouts don’t see any upside to Robiskie, feeling he can be a valuable No. 2 receiver, but won’t mature into a star. Massaquoi is a big receiver who is prone to dropping easy passes.

Mangini has declared quarterback an open competition and may the best man win. Anderson was terrific in 2007, but had total collapse last season and gave way to Quinn, who showed some promise in limited action but with such a small sample it’s hard to judge whether he’s the answer. Regardless of who emerges as the winner here, if you’re banking on a Brown QB to get you through the season, make sure you handcuff the backup.

Lewis will start for the Browns but he’s not been an elite back for some time. Though he started all 16 games for the Browns, he didn’t record a single 100-yard game and barely mustered a 1,000 yard season. Breathing down Lewis’ neck is second-year man Jerome Harrison who had a nifty 7.2 yards per carry average on just 34 carries last year. Harrison is someone you should keep your eye on as he will spell Lewis at times this year to keep the old guy fresh. He could even slip into the job if Lewis can’t be an effective back anymore or can’t stay healthy. However, most believe that Harrison isn’t suited to be an every-down back, so sixth rounder James Davis out of Clemson could be a darkhorse in this competition.

Stop me if you’ve heard this one before: Blankety Blank, of the Cleveland Browns really regressed last season. In this case, we’re talking about Edwards. While he has enormous potential and game breaking ability, Edwards looked nothing like the wide receiver who racked up 80 catches for 1,289 yards and 16 TDs in 2007. Chalk some of it up to lousy QB play, but Edwards deserves his share of the blame as he led the league in dropped passes. He’s also been the subject of plenty of trade rumours in recent months. With the suspension of Stallworth, the number two receiver job with the Browns is up for grabs. Apparently, return specialist Josh Cribbs is working exclusively as a WR during the various summer camps, and some believe he has a chance to line up opposite Edwards on Opening Day. Cleveland signed free agents Mike Furrey and David Patten for some veteran presence in the WR corps, though rookies Robiskie (considered among the most NFL-ready receivers in draft) or Massaquoi, who has impressed Mangini, might be better options. Remember, though, that Furrey is just two years removed from that huge 98-catch season

With Winslow traded to the Bucs, and the knee injury to nine-year veteran Steve Heiden, TE is a position that’s very much up in the air in Cleveland. Former Bill Robert Royal is in the mix, but long term, the job likely belongs to former Missouri star Martin Rucker. Rucker had a rough rookie year, logging time in only five games and catching only two passes. Still the young man has talent and should improve with experience, so consider him a sleeper heading into 2009.

Former Pro Bowl return man Cribbs — all together now — regressed in 2008. He lost more than five yards off his kick and punt return average, though he still managed to take a kickoff back for a score last season. As discussed above, Cribbs is now in the mix for a WR job. The defense was a disappointment as they ranked near the bottom of the league in yards per game. Phil Dawson is a solid kicker, but his value is tied to how well the Browns can get into position to score. Unfortunately, Dawson missed mini camp, as he’s reportedly holding out for a new deal.

By Todd Habiger
This entry was posted on Tuesday, June 23rd, 2009 at 12:02 pm and is filed under 2009 RotoRob NFL Draft Kit, FOOTBALL, Team report, Todd Habiger. You can follow any responses to this entry through the RSS 2.0 feed. You can skip to the end and leave a response. Pinging is currently not allowed.