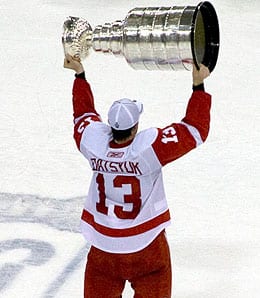 Pavel Datsyuk isn’t around to try to help the Wings repeat as NHL Champions.

Home teams sure are doing well in the playoffs.

Detroit won the first two games in Detroit while Pittsburgh has taken the last two in Pittsburgh.

Evgeni Malkin has been a dynamo, as he’s been for long stretches of the postseason. Sidney Crosby scored his first goal of the series in Game Four. And Detroit’s Pavel Datsyuk, famous for disappearing in the postseason, has literally not been a factor, scratched due to a foot injury.

Home has been such a huge storyline in the playoffs because of matchups. In Detroit, where the home team had the last change, the Wings were able to get Henrik Zetterberg’s line out against Crosby. In Pittsburgh, where the Penguins have the last change, it’s been easier for Crosby to avoid Zetterberg. Penguins coach Dan Bylsma has helped things by mixing and matching Crosby with various wingers — none too tremendous success. Luckily, Crosby-friendly officiating hasn’t made the Finals too taxing for him. In fact, sources have told Ice Chips that Crosby is about to sign an endorsement deal with bubble wrap.

Still, the Penguins were down 2-0 and now the series is tied. Those flightless, waddling birds must be doing something right.

There’s been some speculation that the Tampa Bay Lightning would entertain the possibility of dealing the No. 2 overall pick in the upcoming draft, and everyone knows that the Leafs covet that pick, as they desperately want John Tavares (who, of course, may very well go first overall to the Islanders). But the Lightning recently brought the top three prospects — Tavares, Victor Hedman and Matt Duchene — to town for private workouts. This suggests that Tampa Bay plans to use its pick, or at least, that it’s going to take a king’s ransom to pry it from them. Conventional wisdom indicates that the Lightning will wind up with Hedman, a smooth-skating 6’6″ defenceman who could anchor the team’s defence corps for years to come. With the draft coming in just three weeks, we’ll try to get a primer out in the next little while.

By Steven Ovadia
This entry was posted on Friday, June 5th, 2009 at 11:23 am and is filed under HOCKEY, Ice Chips, Steven Ovadia. You can follow any responses to this entry through the RSS 2.0 feed. You can leave a response, or trackback from your own site.