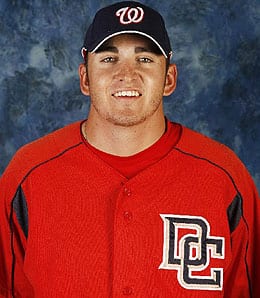 Despite the Nats’ struggles lately, John Lannan is winning ballgames.

So much for the Washington Nationals turning things around; after winning three straight for the first time all season last week, they’ve now dropped three in a row. As we discussed Tuesday, offense hasn’t been the problem; pitching has made this the worst team in baseball…again. They set a season high with 15 hits back on May 4, upped that to 18 two games later, and then threw another 15 hits on the board on Monday. If the Nats can get some arms, they’ve got something good on their hands here.

Okay, it was seriously ugly, but a 2-0, 2.25 week will still get you nominated for Player of the Week, as it did for John Lannan last week. I think he deserves another look in deeper NL-only leagues, especially in a 4×4 format after he won back-to-back starts. In 12 IP, he only gave up 12 hits and four runs (three earned), but here’s where it gets unsightly – he walked eight against just two strikeouts. Believe it or not, Lannan’s control is slightly improved this season, but with a strikeout rate down more than one per nine innings, he hasn’t exactly lived up to my predictions as a sleeper. So far, I was off base on Lannan, but I will continue to monitor this situation – I can’t shake the feeling that there’s something there.

Kazuo Matsui is in a serious skid lately, and I’m starting to wonder when he’ll be bumped from the lead-off spot. He took an 0-for-4 Tuesday (and committed his first error of the season) and is now in a 2-for-18 slump, dropping to .245 for the year. Matsui’s less than stellar walk rate is down, and he’s fanning more often. We thought he was almost good enough to be considered a mixed league starter heading into the season, but he has not lived up to that ranking. At this point, Matsui is NL-only material, or perhaps a decent bench option in a deeper mixed league. His solid glove work, unfortunately, does nothing for our Fantasy teams.

It was a rough night for Astro slugger Carlos Lee Tuesday. Not only did he take an 0-for-4 to snap a 10-game hitting streak, but he almost gone beaned twice by flamethrower Ubaldo Jimenez. Hit the dirt, big boy! Lee came into the game on fire, having gone 8-for-12 with two runs, three doubles, a homer, six RBI and a walk in his previous three games, but Jimenez – as he did to most of the Houston hitters – shut him down. Lee’s power game has been excellent this year, and he’s showing his typical level of middling patience at the plate. What’s holding him back in the early going from playing up to the No. 5 ranking we gave him has been the lack of steals. Lee is usually good for 10 to 15 swipes a year, but so far, he has failed to commit any thievery on the basepaths. Still, his recent hot streak has his numbers on track to come in at career-best levels, improving even upon his superb, albeit injury-shortened 2008 season.

By RotoRob
This entry was posted on Wednesday, May 13th, 2009 at 2:56 pm and is filed under BASEBALL, Fantasy Notes, RotoRob. You can follow any responses to this entry through the RSS 2.0 feed. You can leave a response, or trackback from your own site.