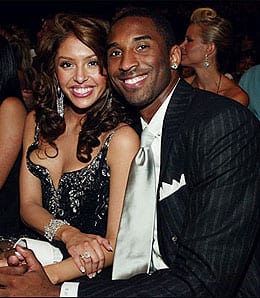 You’ll have to forgive Kobe Bryant if his mind is on other things when he plays the Clippers. Speaking of which, who is that on his shoulder, whispering in his ear?

When the Cleveland Cavaliers and San Antonio Spurs square off Sunday afternoon at 1 p.m., will we be witnessing a preview of the NBA Finals? Of course, the Cavs are in serious danger of dropping their third straight for the first time all season. On Friday, when Cleveland was soundly thrashed by the Magic, LeBron James was held to 26 points and shot just 7-of-20 from the field. He dropped just five dimes, had only one steal and failed to block a shot. On the plus side, he was a perfect 10-for-10 from the line, pulled down nine boards and canned two treys. Hey, even when the King is having an “off” game, he’s still helping his fantasy owners.

In a game that won’t exactly be met with the same anticipation, the Lakers host the Clippers Sunday night in the classic “Who’s House is this Anyways?” battle. But make no mistake, the Clippers have gone right back into their traditional role as LA’s “other team” the past few seasons after capturing the city’s imagination during that huge 2005-06 season. The Lakers, meanwhile, have not only run away with the Pacific Division, they are also making a mockery of the entire Western Conference, having already clinched the conference title. Now the Lakers have their sights set on winning the team’s first NBA title in seven seasons. And with seven straight wins, they still have a chance to secure the NBA’s best record overall. A 32-5 home record has helped this team reach 60 wins for the first time since 1999-2000, which was a championship season, by the way. Kobe Bryant, the only player still with the team from its last title in 2002, hasn’t been at his best lately, but Friday he did shoot well (7-for-11, including 4-for-6 from beyond the arc, 2-for-2 from the line) and dropped seven dimes while adding two steals. Against the Clippers, he tends to have off games (20.3 PPG in three games this season), but then again, that’s not a shock considering the Lakers have won those games by an average margin of over 22 points.

Dwight Howard is one superstar who isn’t slowing down at all as he led his Magic to a second straight win Saturday. Give Orlando eight wins in nine games and 11 of 13 as it has crept within a half game of the Boston Celtics for second place in the East. Superman went ballistic again Saturday, with 21 points and 23 rebounds (tying his season high). He now has nine 20-20 games this season. To put that in perspective, since the beginning of the 2004-05 season, no one has that many 20-20 games in total. Howard has recorded 23 of them since then, while Kevin Garnett is next with eight. No one else has more than five. Is this guy Howard any good? How’s this for sick? On Saturday, in addition to being the leading scorer and rebounder for the Magic, Howard also paced the team in assists (five), blocks (four) and steals (three). Bring it, big guy! He’s now averaging a steal per game for the first time in his career, as if he didn’t help you in enough cats already.

Owners of Dwyane Wade have to be happy that Miami is jostling for playoff positioning, as that means that Flash is unlikely to get any games off before the playoffs. Miami exploded for a franchise record eight treys in the fourth quarter (three by Wade) to take over the game Saturday for a win in Washington, the Heat’s second straight road victory. More importantly, Miami kept pace in the race for fifth place in the East, one game back of Philadelphia. Wade, who may very well be the league’s MVP this season, did his thing as always, sinking 7-of-13 from the field and 15-of-17 from the line for 33 points. He added eight boards, five assists and four treys. Sure, Flash coughed it up six times, but who the hell can complain about that when he’s throwing up this kind of line?

New Orleans also plays a huge game Sunday night when struggling Utah pays a visit. The Hornets blew a chance to move into fourth place in the West when they lost to the Warriors on Friday. So this sets up a big game against the Jazz as New Orleans looks to fend Utah off for sixth place. The Hornets still have a shot at home court advantage, but they have a tough schedule to finish out the season. More importantly, they can clinch a playoff spot with a win Sunday. Don’t blame Chris Paul for the loss Friday; he went crazy, sinking 16-of-28 from the field and 7-of-8 from the line for 43 points. He added four 3-pointers and three steals despite foul trouble. Paul has missed a few more games than he did last season and he hasn’t shot as well from beyond the arc (notwithstanding Friday’s explosion from downtown), but CP3 just keeps getting better. If the Hornets were enjoying as good a season as they did last year, Paul would be more involved in the MVP discussion. As things stand, he still gets my vote, at least for Fantasy MVP.

The Bulls have won eight of their past 11 games to take over sole possession of the seventh place, now a half-game up on the Pistons. Derrick Rose, a slam dunk for Rookie of the Year despite the bounty of great freshmen performers this season, wasn’t at his best with just 15 points and five assists. However, he shot well (7-for-12 from the field and 1-for-1 from the line) and added two steals and four rebounds. Rose’s rebounding in particular has been picking up lately. On Tuesday, he pulled down a career-best 11 boards. Rose is poised to be the first Chicago player to be Rookie of the Year since Elton Brand did it in 1999-2000.

By RotoRob
This entry was posted on Sunday, April 5th, 2009 at 12:22 pm and is filed under BASKETBALL, NBA Today, RotoRob. You can follow any responses to this entry through the RSS 2.0 feed. You can leave a response, or trackback from your own site.