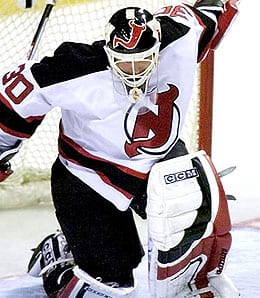 What a week for Martin Brodeur. First he breaks Patrick Roy’s all-time wins record, then he gets stuck with a $500,000 annual alimony payment for the next 20 years (lesson of the day: when you make millions of dollars as a pro athlete and you opt to run off with your wife’s sister, save your money). When asked how much longer he was going to play, Brodeur mentioned that he’d like to break the all-time games-played record. If he lives up to that, then he’s good for another two or three years, so there’s no need to let him go from your keeper team just yet. Besides, he’ll need that extra cash to make those alimony payments.

By the way, for future notice — should your fantasy goalie happen to break the all-time wins record, learn your lesson from Brodeur. He’ll sit out the next game and his team will play said game with an amazing amount of apathy. Jot that down for whenever someone tries to break Brodeur’s record about 30 years from now; you’ll thank me then for the fantasy tip.

Remember Steven Stamkos? Yeah, the kid that got all the hype and was a big flop at the beginning of the season? Well, apparently the right way to develop a player is to have your coach be an illegal gambler rather than a mulleted loudmouth, as Rick Tocchet’s turned Stamkos into a gamer. It’s flown under the radar since the Lightning has been out of the playoff hunt, but Stamkos has been putting up close to a point-per-game pace for a few weeks now. Mark him as a sleeper pick for next year’s draft as he has the work ethic and positive attitude necessary to really take his talent to the next level.

Since he’s been in the league, Sidney Crosby hasn’t found a regular winger to play with. While Bill Guerin may be near the end of his career, grinder Chris Kunitz seems to have found his meal ticket. Kunitz, who was more of an energy player capable of potting 15 to 20 goals, is damn near unstoppable with Crosby (12 points in 10 games). The best part? Kunitz is signed for the next few seasons, so he’ll be riding shotgun with Crosby for a while. He’s a great mid-round pick and if his chemistry stays strong with Crosby, he should be able to hit 30+ goals next year.

For anyone that cares: Marian Gaborik plans on returning soon. Oh, and if you want to know what kind of character guy Gaborik is, he apparently doesn’t watch his team while he’s rehabbing, nor does he want to play through pain. Now, I’ll give him a pass on not wanting to watch the Wild (the Jacques Lemaire automatons don’t play the most thrilling brand of hockey), but I don’t know how he could be accepted back into that locker room when they’re scratching and clawing for a playoff spot and he’s refusing to play through pain. Someone should sit him down and force him to watch Slap Shot and Miracle non-stop in a Clockwork Orange-style torture chair until he realizes what a hockey player’s sacrifice for the team should be.

Ryane Clowe is the latest San Jose Shark to go down with injury. He’ll be out about a week, but that’s okay — he hasn’t popped in a power play goal in 20-some games.

One of the best trade deadline pickups has been Antoine Vermette for the Blue Jackets. Sure, he does things like kill penalties and win faceoffs, but his fantasy value has skyrocketed since getting out of Ottawa. Playing on a second line with R.J. Umberger, Vermette’s been good for just about a point per game, including clutch goals, as the BJs look to get into the playoffs for the first time.

Those wacky Atlanta Thrashers just won’t go away. Even though they’re out of the playoff race, they’re still playing with pride for first-year coach John Anderson. Part of the reason? Kari Lehtonen is playing like we all expected him to when he was drafted No. 2 overall. Lehtonen’s available in more fantasy leagues than he should be and will be a good boost for anyone needing to finish out the number of goalie games in their league. However, it still doesn’t excuse those hideous Atlanta third jerseys.

For a while it looked like Chris Drury was waking up from his season-long slumber, but he recently endured three straight scoreless games, going -3 in the process. Yes, he’s managed an assist in back-to-back games since then, and he got the go-ahead goal in the shootout Tuesday (not that it helped you at all), but remember that this was a dude who scored 37 goals in his final season as a Sabre. Last year, he dropped to 25 in his first campaign as a Blueshirt, and this season, Drury will be hard-pressed to reach 20 goals.

And even though this has no fantasy implications, it’s still awesome. Admit it, how many of you have wished that Jordin Tootoo got the living crap beat out of him? Brad Staubitz fulfills your wish — ouch!

By Mike Chen
This entry was posted on Friday, March 20th, 2009 at 4:01 pm and is filed under HOCKEY, Ice Chips, Mike Chen. You can follow any responses to this entry through the RSS 2.0 feed. You can leave a response, or trackback from your own site.