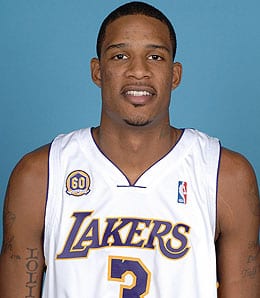 Even marginal fantasy Lakers like Trevor Ariza could be useful against Washington.

As if things aren’t going swimmingly enough for the Los Angeles Lakers, owners of a two-game winning streak and the best record in the NBA, they begin a three-game homestand Thursday evening against the worst team in the Eastern Conference, the Washington Wizards. This has all the hallmarks of a true classic – the best in the West vs. the worst the East has to offer. You may want to keep young children away from the television screen this evening.

The Lakers have ridden the NBA’s best offense and an improved defense to the top of the standings. But they will get tested Sunday, when blazing San Antonio pays them a visit and attempts to make a statement about Western Conference supremacy. LA’s homestand finishes with a game against Charlotte, also playing very well lately, but the owner of a mere five road wins.

LA has taken out Washington four straight times, and in case you had any doubts about this streak hitting five, consider that Washington has only won three of 20 games on the road this season, while the Lakers have only lost three of 24 home games. Oh, you can throw in the fact that in those four wins over Washington, Los Angeles has averaged 113.3 PPG. Ugly. I’d suggest you bring out your marginal Lakers Wednesday: guys like Trevor Ariza, Vladimir Radmanovic and even Sasha Vujacic could prove useful in this game.

We had Andrew Bynum pegged as a top 10 centre this season, but so far, he’s barely cracked the top 20. That may be changing, however. The big kid has really picked up his offensive game of late, punctuated by a serious explosion Wednesday night to the tune of a career-high 42 points on 17-of-24 shooting with 15 rebounds and three blocks. Bynum has been getting more touches as the season has progressed and it’s really beginning to pay off in his offensive totals. Unfortunately, his blocks and boards haven’t seen the same increase; in fact, his numbers in both these areas have been a disappointment so far this season, even though he’s finally remained healthy and has been given more PT. Obviously his huge game Wednesday provided a glimpse of what Bynum is capable of, so I’d suggest that the opportunity to buy low may close soon as I expect him to be one of the most valuable fantasy centres in the second half.

Amazingly, Bynum is the first Laker not named Kobe Bryant to score at least 40 points in a game since Shaquille O’Neal did it on March 21, 2003. Is Bynum ready to give the Lakers a legitimate third scoring option behind Kobe and Pau Gasol? Given his 16.4 PPG in January, the answer appears to be yes.

Speaking of Gasol, he’s been a bit inconsistent lately. For instance, on Monday he turned in his 15th double-double of the season, but with Bynum going off Wednesday, Gasol was limited to 10 points and six boards. I wouldn’t worry too much about the occasional off game; Gasol’s PT has risen steadily as the season has gone on and he’s getting as many touches now as he’s had all year. Gasol has stayed healthy this year, and while his overall touches are down from last year, he’s enjoying one of the best rebounding seasons of his career and his value has nearly matched what he accomplished in an injury-plagued 2007-08.

Derek Fisher, who has been getting monster minutes with LA’s backcourt depth currently challenged, has been slumping recently, and his mild groin strain Wednesday definitely was a warning shot that his 34-year-old body is screaming for some downtime. He’s been a popular waiver wire pick in recent weeks, but the fact that he’s settling for jumpers too often and not driving to the basket and drawing fouls is another sign that the PT is wearing on this veteran. Fisher has been a very durable player in recent years, but this trend of getting to the line less and less has really held back his offensive potential, especially since he’s such an excellent FT shooter. If Fisher drove more and hoisted a bit less, he could be a 14-15 PPG man. At any rate, I’d say his run is nearing an end with Jordan Farmar (knee) possibly returning this weekend. Sell high while you can.

Much has been made of the Lakers’ scoring depth this season, with a half dozen players averaging at least 9 PPG, and how that takes some of the pressure off Bryant to do it all himself. However, I’d say the team actually had more depth last season. Yes, they only had Gasol down the stretch and Bynum missed over the half the season, but the 2007-08 Lakers had eight players who averaged at least 8.4 PPG. In fact, despite them leading the NBA in scoring this year, they are averaging one point less per game than they put up last season.

So this is the second of a back-to-back games for the Lakers, and the first was on the road. But given those circumstances, this is about as easy as back-to-backs go: Wednesday’s game was at the Staples Center against the Clippers, who were technically the home team, but come on. Also, the combined record of these two opponents is 18-64.

By the way, how much does Bynum love playing the Clips? Wednesday, as mentioned, he had a career night offensively. Back on November 5, he pulled down a career-best 17 rebounds against them. Circle April 5 on your calendar as the next time Bynum gets to go hog wild on the Clippers. How about a new career best eight blocks this time?

The Lakers have done an excellent job on the offensive glass this season, pulling down an average of 12.3 offensive rebounds per game, good for a share of sixth place in the NBA. So it was no surprise that on Wednesday, going up against a Clipper team that has struggled to keep opponents from pulling down boards under their own basket, the Lakers went wild with 17 offensive boards, eight of them by Bynum alone. That directly led to 34 points.