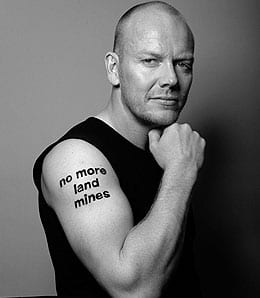 Sorry…those of you expecting Mats Sundin to be the instant saviour of the Canucks may need to wait awhile to see him flex his muscles and become an explosive force.

Stop the presses — this just in. The messiah has returned, the end of the world is upon us, floods and destruction and arks with two animals, and all that stuff. You know, lightning from the sky (as opposed to from Tampa), earthquakes, and all other sorts of rapturous moments are occurring.

Oh wait, that didn’t happen? I’m sorry, I’ve just been reading some of the newspapers in Vancouver and I could have sworn that this Mats Sundin guy was the second coming of an all-powerful deity. Wait…what’s that? You mean he’s a late-30s Swedish hockey player anchoring a second line?

That’s how they roll in Vancouver, huh? Well, Sundin’s first game wasn’t all that spectacular, but that’s to be expected. Sorry, Canuck fans, but it’ll take him a good three weeks or so to get him into game shape. During that time, you might see him in a variety of line combinations. To start, Sundin lined up with Kyle Wellwood and Mason Raymond. Both can expect a bump to their good-but-not-great stats, though Raymond will probably be more available as Wellwood has made a little more noise (most likely because he used to play in The Centre Of The Hockey Universe).

By the way, what’s the over/under before an announcer stumbles on Sedin/Sedin/Sundin during a Vancouver power play? Can you imagine the wackiness that would happen if Mike Lundin played there too?

Ladies and gents, the guy drafted after Sidney Crosby has arrived. After a few years of ups and downs, Bobby “Two First Names” Ryan is finally getting consistent ice time (and some would say, he’s finally gotten his head out of his ass) and it’s paying off. His recent tear (points in nine out of 10 games), including a hat trick against the LA Kings, shows that life after Teemu Selanne’s injury and Corey Perry’s suspension isn’t all that bad. While Perry’s suspension has opened up a little more ice time with Ryan Getzlaf, Ryan’s been getting things done on his own and isn’t necessarily the product of lucky linemates. Tell me someone who could do this needs help to produce.

Being an underachieving high draft pick is apparently the prerequisite to getting a $16 million/four-year extension. Such is the life of Jordan Staal, but guess who’s getting a shot at playing wing for Crosby? Now that’s a good week. The noise you hear is Coach Therrien pulling out what’s left of his hair as the Penguins continue to spiral downward.

Hey, you remember Jose Theodore? The up-and-down goalie that bailed on Colorado after reviving his career there? Well, it looks like he finally shook off the bad mojo that came with chasing a contract in Washington. However, Theodore is notoriously streaky, so ride out his hot hand for a little bit but be sure to pull him at the first sign of faltering. If you’re looking to trade, now’s a good time to capitalize (no pun intended).

Christian Ehrhoff looked like he was having a breakout season for about 20 games or so. During that time, he was going at about a point-per-game pace. Since then? He’s got one assist in a bazillion games. The Sharks are hitting a slump (slump, as in losing a handful of games in OT and one in regulation) and they’re having trouble scoring, probably because they’re not putting up 40+ shots a game anymore. Ehrhoff’s not the only Shark that’s cooled off, as Devin Setoguchi hasn’t been the same since taking a few games off due to the death of his grandmother. By the way, Setoguchi is reunited with Patrick Marleau and Joe Thornton starting with the game in Edmonton.

It’s good to see Sean Avery still having an indirect effect on the NHL. After Dion Phaneuf played in New York in December (the game where the crowd started chanting “Sloppy Seconds” at him), he failed to register a point in nine out of 10 games. Ouch. Maybe Dion’s finally stopped crying (making out with Elisha Cuthbert on New Year’s Eve probably helped) because he’s back with three assists in his past four games.

By Mike Chen
This entry was posted on Saturday, January 10th, 2009 at 12:05 pm and is filed under HOCKEY, Ice Chips, Mike Chen. You can follow any responses to this entry through the RSS 2.0 feed. You can skip to the end and leave a response. Pinging is currently not allowed.