The Wire Troll: Varejao No Longer a Sideshow 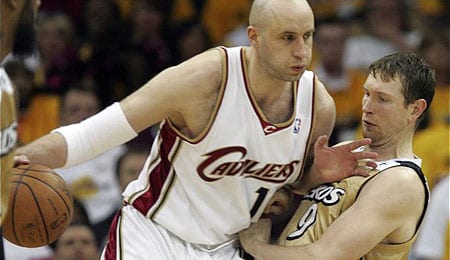 An injury to Big Z has allowed Sideshow Bob to move to centre stage.

With Herija sidelined due to illness, RotoRob takes over the Troll for the week.

Anderson Varejao, Cleveland Cavaliers: Last week, we recommended Sideshow Bob, suggesting that he was maintaining his value even with Zydrunas Ilgauskas back in action. But now, with the Big Z out for nearly a month because of his ankle, Varejao is no longer merely a sideshow – he’s taken centre stage in Cleveland. And the early results are incredibly encouraging. How about a game-high and career-best 26 points on Friday night? He came up big Sunday, too, racking up a double-double with a steal and a block. That’ll put a curl in his owners’ hair.

Joakim Noah, Chicago Bulls: Noah is just a short-term pickup while Drew Gooden is out with an ankle injury, but the former Gator star has been doing a solid job lately – especially on the glass with 9 RPG in his past four. Saturday, despite being limited to 14 minutes because of foul trouble, Noah still blocked three shots and managed five points, his fourth straight game with at least that many points. Now, if only he could avoid snacking in the locker room before the game…

Ancient big man Dikembe Mutombo has been signed by the Rockets for the remainder of the season. In a deep league, he could contribute enough blocks to be somewhat useful…Andray Blatche is a bit hobbled by an ankle injury, but he managed to play 22 minutes Sunday and blocked three shots. It’s time to give him another look…Marc Gasol is starting again with Darko Milicic hurt, and he’s been putting up nice numbers. Sunday afternoon, he had already racked up 19 points in 18 minutes through halftime.

Bobby Simmons, New Jersey Nets: Simmons hasn’t been the same since injury cost him the entire 2006-07 season, but he’s back in the Net starting lineup and has played very well recently, making him a solid pickup for those who could use some help in 3-pointers, rebounds and steals. In his last two games, Simmons has averaged 15.5 PPG while canning five treys and shooting and uncharacteristically good 12-for-21. He’s recorded a steal in four straight games, and has been doing a solid job on the glass, pitching in with at least five boards in each of the past six games.

Hakim Warrick, Memphis Grizzlies: I’m loving the consistency I’m seeing from Warrick off the Grizzlie bench lately, and that’s not something you can usually say. In fact, I picked up Warrick during one of his hot streaks earlier this season, and quickly grew frustrated. Now, however, after scoring a team-high 16 points on Friday, Warrick has put together a run of seven straight games with at least 12 points. He’s been blocking shots (1.4 per game over the last five), doing a great job from the line (83.3 per cent over the last four), playing starter-type minutes (32 MPG last three) and even pitching in with some rare assists (1.5 per game in the last two). On Friday, Warrick did a good job on the glass with six boards and in the rarest of rare feats for him, he nailed his second 3-pointer of the season. He’s become a very effective sixth man for Memphis, and someone definitely capable of providing a scoring boost to your team.

Visa issues have delayed the debut of Nenad Krstic, but if you need a big man, he’s worth a speculative pickup as he’ll be suiting up some time this week…James Posey has been seeing plenty of minutes off the Hornet bench lately, and he’s drained eight treys in his last three games.

Jarrett Jack, Indiana Pacers: Whether or not T.J. Ford is healthy, the way Jack has played of late, he deserves to eat into Ford’s minutes. But with nine straight games in which Jack has played a minimum of 31 minutes, I’d say we’re at the verge of a timeshare (if we’re not already there). And Jack has responded to the starter-type minutes. He’s been shooting the lights out lately, sinking 58.7 per cent from the floor in the past four, a stretch which has including eight treys. Overall, he’s averaging over 21 PPG in the past three, and he’s even pitching in off the glass with 6 RPG in the past two, while sinking all six of his FT attempts during the same stretch. Friday, Jack dropped four dimes – a not uncommon trend, as he averaged 4.4 APG in December.

Will Solomon, Toronto Raptors: With Jose Calderon hurting, Solomon has proved he’s worth a short-term pickup in deeper leagues. He’s been a bit more active on the boards lately (1.8 RPG in last five), is seeing more action (20.3 MPG in last three) and has shot well (13-for-21 from the field, 3-for-3 from the line), averaging 10 PPG during this three-game stretch. In the last two games – both much-needed Raptor victories, Solomon has helped facilitate the offense by dishing 5.5 dimes per game. Hell, in Sunday’s win over Orlando, he even blocked his second shot of the season. Toronto won’t rush its star PG back with Solomon playing so well – and leading the team to victory – so Solomon may prove to be a sneaky pick up this week.

I got worried when I dropped Roger Mason for Anthony Parker and Mason was immediately picked up by another team, but after a couple of weak games, Parker has proved to be a smart addition. He’s back as the starting two-guard in Toronto and looked unstoppable Sunday, racking up a season-high 26 points…If you have an extra slot on your bench, you should know that Kirk Hinrich is ahead of schedule in his recovery from thumb surgery. He should be back in action before the end of January, so consider your options…if Rodney Stuckey is still unowned in your league, you need to rectify this situation pronto. He’s coming off a 38-point explosion on Friday, and is putting up solid numbers again this afternoon. Since he’s moved into the starting lineup, Stuckey has averaged 15.9 PPG and 5.9 APG.

By RotoRob
This entry was posted on Sunday, January 4th, 2009 at 6:46 pm and is filed under BASKETBALL, RotoRob, The Wire Troll. You can follow any responses to this entry through the RSS 2.0 feed. You can leave a response, or trackback from your own site.