Squeeze Play: Eva’s Got Nothing to Say 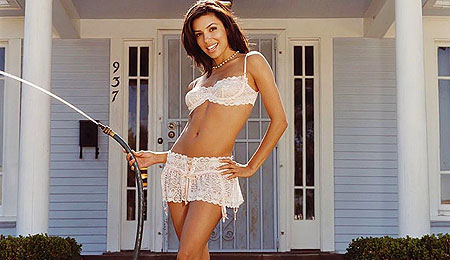 Neither Eva’s hose nor her hoisery could slow down the Lakers.

Eva Spurred on by Paparazzi

Upon arriving in Los Angeles for Game Five between her husband Tony Parker’s Spurs and the Lakers, Eva Longoria was grilled by the Paparazzi about how she felt about her man’s team being down. Was she hassled by the Lakers’ fans on the plane, wondered the TMZ reporter? Uh, dude, probably not nearly as bad as you’re hassling her, ya asswipe. Strangely, Eva didn’t have much to say on how San Antonio could get back in the series. In fact, she didn’t have much to say at all. Anyways, Parker and the Spurs were taken out by the Lakers, leaving the couple to begin their off-season vacation plans earlier than expected. Check out the video here.

On Saturday, guess who was seen at the UFC match at MGM Garden in Las Vegas? Michael Jackson of all people was spotted taking in the action, And get this – there were no pre-pubescent boys on the card for the evening. Go figure!

Among the talk of the town at Cannes was James Toback’s 90-minute documentary Tyson, about former boxing champion/convict Mike Tyson. The entire film is essentially one long interview with Tyson, whose candor is nothing if not refreshing. He spills his guts about virtually every component of his controversial life, both in and out of the ring. First, Tyson would bite your ear off; now, he just talks it off. I guess that’s progress, isn’t it?

By RotoRob
This entry was posted on Friday, May 30th, 2008 at 10:02 pm and is filed under Misc., RotoRob, Squeeze Play. You can follow any responses to this entry through the RSS 2.0 feed. You can skip to the end and leave a response. Pinging is currently not allowed.