Ice Chips: The End Is Near 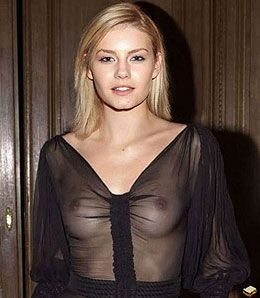 With a pair like that waiting for you at home, small wonder Dion Phaneuf was on fire in the playoffs.

Some time in the next seven days, the Stanley Cup will be awarded. In fantasy terms, that means that there’s nothing else to really consider except for a quick review of the past. This week, let’s take a look at some of the playoff’s best – and worst — performers.

Chris Osgood: When you’re a goalie who wins all the time and blocks almost every shot, well, that’s a pretty darn valuable fantasy player. If you’re looking a little more analytically, you could say that Osgood’s great stats are a result of his strong defense (look at Detroit’s shots against) and his team’s puck-possession style. Well, time controlling the puck doesn’t count for squat in fantasy, but wins do. Kudos, Osgood—you’ve been so good that even Dominik Hasek probably has you in his fantasy pool.

Sidney Crosby: You know, it’s getting to a point where there isn’t too much to doubt about Sid the Kid anymore. Maybe he secretly gets his frustrations out by punching kittens or licking poisonous toads, but on the ice, he’s stepped up to every challenge. It took a few weeks for him to fully mesh with Marian Hossa, but once Hossa realized that playing with Crosby is different from any centre in the Atlanta Thrasher lineup, he started piling up many more points. Nice job, Sid—now let’s see if you can pull another rabbit out of the hat and lead a comeback.

Johan Franzen: A goal-per-game—that’s a pretty good clip to go on. Had he not had to deal with concussion symptoms, who knows where Franzen would rank in the overall playoff scoring race. As it stands, Franzen will have to be satisfied with leading the league in goals despite having played less games than a bunch of other players.

Marc-Andre Fleury: Remember when Ty Conklin was a god in Pittsburgh for a few months? Well, not anymore. The Flower’s stellar play complimented the Penguin young guns and bailed them out when Pittsburgh faced waves of overwhelming chances (see: Game One and Game Two of the Detroit series).

Evgeni Malkin: It’s hard to rag on a guy who was a potential Hart Trophy winner, but the dynamic Malkin from the first two rounds is completely different from the on-again-off-again Malkin of the last two rounds. His point totals are still pretty darn good, but it’s frustrating because you know Malkin can be better.

Mike Ribiero: It’s a little unfair to simply grab players from the final two teams. If you drafted Ribiero, you were probably able to get him with a mid-round pick. He actually out-Joe Thorntoned the real Joe Thornton with a number of impeccable passes and great plays. Yup, the Stars are out, but Ribiero made fantasy owners very happy with his high-flying skills.

Jaromir Jagr: Apparently, Jagr does have a pulse after all. Who would have known after a middling regular season? Jagr’s points-per-game are among the best in the postseason, and he pretty much did everything humanly possible to get the Rangers farther in the playoffs.

Dion Phaneuf: Maybe girlfriend Elisha Cuthbert offered something extra special to Phaneuf for every shot that he took. It sure seemed that way, since Phaneuf was a monster with the puck from the blueline. His rockets from the point created a ton of Calgary offense; it’s just too bad that Phaneuf and Jarome Iginla can’t carry an entire team on their backs.

Andrei Markov: Markov was one of the league’s most consistent point-producing defensemen, but somehow, the vaunted Montreal power play failed the Habs in the playoffs. One of the reasons is the disappointing play of Markov. With him managing just four points in 12 games (two on the power play), East-leading Montreal struggled way more than it should have against a much weaker Boston Bruins squad, then forgot to show up for large stretches of the Philadelphia series.

R.J. Umberger: Daniel Briere and Mike Richards got most of the press, but Umberger’s knack for big goals stood out, so much so that he’s only a few behind a handful of guys who happen to still be battling for Lord Stanley.

Milan Michalek: Um, wasn’t Michalek supposed to be one of those great young players that carried San Jose past the second round? In theory, yes, but four points in 13 games isn’t going to quite cut it.

By Mike Chen
This entry was posted on Friday, May 30th, 2008 at 10:40 pm and is filed under HOCKEY, Ice Chips, Mike Chen. You can follow any responses to this entry through the RSS 2.0 feed. You can skip to the end and leave a response. Pinging is currently not allowed.