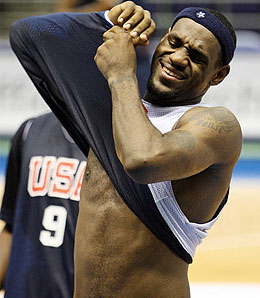 LeBron James gave fantasy owners everything but the shirt off his back.

As the NBA regular season winds down next week, it is time to look back on one of the best regular seasons in quite some time. With the resurgence of the Celtics, the absolute insanity surrounding the trade deadline, and the remarkable battle in the West between the top nine teams, the regular season has been full of compelling story lines. As most fantasy basketball leagues are wrapping up, this week’s Wire Troll will reflect on the 2007-08 fantasy basketball season by selecting our winners for several awards.

LeBron James: In a typical fantasy draft, you expect great numbers from the top player drafted. You expect to be rewarded for getting the number one pick. King James was the consensus number one player entering the 2007-08 season and if any owner went another direction with the first pick they should probably stop reading now. Clearly, they are beyond our help. James has had a monster regular season and has increased his production from last year in almost all categories. How is this for a ridiculous stat line? LBJ is averaging 30.3 points, 7.9 boards, 7.2 assists, 1.85 steals, and 1.07 blocks per game while shooting 48.4 per cent from the floor. It is scary that he is only 23 years old and his game continues to improve. I am just waiting to see how many more fans will challenge James in the fourth quarter of a tight game. Memo to fans attending games against the Cleveland Cavaliers: do not egg him on – he will make you pay.

Runner-up: Chris Paul — CP3 has led the New Orleans Hornets to the best record in the loaded Western Conference and has rewarded owners who drafted him this season. Paul’s average draft position this season was early second round, but his production certainly merits him to be taken in the first round next season. In just his third season, he has averaged 21.1 points, 11.6 dimes and 2.7 steals while shooting 48.7 per cent from the floor and 85.1 per cent from the charity stripe. Paul continues to impress as the floor leader for the Hornets and I am excited to see how his team will respond in the playoffs.

Breakthrough Player of the Year

Rudy Gay: In only his second season in the league, Gay has established himself as a serious scoring threat for the Memphis Grizzlies. Averaging 20.3 points per game, almost double his average of 10.9 from last year, Gay has stepped up his game after the Grizzlies traded Pau Gasol to the Lakers. Besides points, Gay contributes threes, steals, rebounds and blocks and could easily be a second round pick looking ahead to fantasy drafts next year.

Runner-up: Mike Dunleavy — The change of scenery certainly did wonders for Dunleavy. In his four-plus seasons in Golden State, he never averaged more than 14 points a game and only played between 27-32 minutes per game. As a member of the Indiana Pacers, Dunleavy has seen steady starter minutes – 36 minutes per game – and has responded. He is averaging 18.7 points, 5.2 boards and 3.4 assists while hitting 154 threes (in contrast to the 70 he made last year). Dunleavy has been incredibly consistent for owners who gambled on him and he should produce similar numbers next year.

The Wire Troll Pick-up of the Year

Hedo Turkoglu: Everyone expected the Orlando Magic to improve this season with the addition of Rashard Lewis and with the continued maturity of Superman, a.k.a Dwight Howard. However, no one could envision that the success of the Magic could be linked to Turkoglu. The Turkish Delight has put together a ridiculous season and is averaging 19.6 points, 5.8 rebounds, 4.9 assists and 0.9 steals while shooting 82.6 per cent from the foul line. Those numbers make Turkoglu as a top 25 fantasy contributor, which is just astonishing considering he went undrafted in most leagues.

Runner-up: Jose Calderon — Another player who went undrafted in most leagues was Calderon. The injury to T.J. Ford opened the door for Calderon to see increased minutes and he responded incredibly. The Spanish Fly has averaged 11.5 points, 8.3 assists, and one steal while shooting 52.5 per cent from the floor, 43.3 per cent from three-point land and 90.8 per cent from the free throw line. This sharpshooter will be a fantasy superstar if he can find a team where he can be the starter.

The Chicago Bulls: Pick a Chicago Bulls player and odds are they underperformed this season. If you drafted any of the Bulls, i.e., Ben Gordon, Loul Deng, Kirk Hinrich, Andres Nocioni or Ben Wallace (now a Cavalier), then I’m sure you agree with my assessment as them providing the ultimate Fuck You of the Year. Last season, the Bulls were a young and dangerous team who knocked out the defending champions Heat in the playoffs. Turn the page to this season and the Bulls have fallen apart. The struggles began early as Deng and Gordon both turned down lucrative contract extensions and the rumours of a Kobe Bryant trade weighed heavily on the team’s young core of players. Next came the firing of coach Scott Skiles and the massive trade with the Cavs that sent Wallace packing. The Bulls have been the biggest disappointment in the league and in the fantasy basketball world as well.

With the regular season ending next week, stay tuned for some amazing basketball as the playoffs begin. Every series in the West will feature exciting matchups and hopefully some thrilling games. I am very excited and will be reporting periodically throughout the playoffs. Good luck to those who are finishing up the last week of their fantasy season.

By Jordan Frank
This entry was posted on Saturday, April 12th, 2008 at 5:52 pm and is filed under BASKETBALL, Jordan Frank, The Wire Troll. You can follow any responses to this entry through the RSS 2.0 feed. You can leave a response, or trackback from your own site.