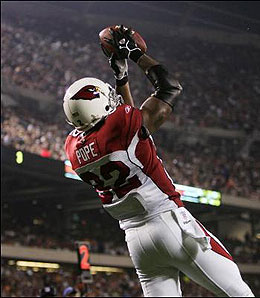 Leonard Pope isn’t the flashiest TE, but he gets his scores.

Larry Fitzgerald stayed heathy and absolutely dominated the league. He turned in the second 100-reception season of his four-year career (not a bad average there) and equaled his 2005 marks of 1,409 yards and ten scores. Fitz also played relatively well during fantasy playoff time, accounting for about 60 yards and a score in Weeks 14-16. Kurt Warner, meanwhile, proved he should probably be the starter heading into next season, as he averaged 294 yards and over two and a half scores per game over the second half of the season. He isn’t physically what he was back in the Rams’ days, but his decision making (while not recovering from concussions) remains steadfast. We’ll also give a begruding nod to Edgerrin James, who eclipsed 1,200 yards.

The Cardinals narrowly missed the playoffs with an 8-8 mark last season. The running game struggles contributed to another unsuccessful attempt at post-season glory for Arizona. James only averaged 3.8 yards per tote and really could not bolster the rush game for the second consecutive season with the Cards. Injuries to Anquan Boldin and Warner for periods did not help matters on offense either. What about the Matt Leinart injury you ask? Warner outplayed him and the team seemed to respond under his leadership. Maybe that’s because of Leinart’s off-season workout regimen? Yet again, Arizona’s defense proved to be an Achilles’ heel, the secondary in particular. Arizona finished 28th against the pass and allowed 232 yards per game.

No matter the year, the formula seems to be the same for Arizona; fix the running game and defense. One more time, Arizona will see if it can get it right. Speed is needed at the running back spot and addressing this in the draft at some point is a great idea. The secondary desperately needs an infusion of the same as well. After a rather lackluster free agency period (in part due to Fitzgerald’s re-signing and having the fourth smallest amount of cap space in the league), Arizona must replenish through the draft.

NFL Draft Countdown seems to think the Cards need secondary help. We don’t really watch defense because, let’s be honest, who cares? We still worry about the offensive line. When Leinart gets injured, Warner will need tons of protection to make sure no defensive player touches his head or thumb. Plus, if it gets a dominating defense, Arizona won’t have to score 42 points a game! We can’t let that happen!

State of the Teams

Quarterbacks – Following the Leinart injury, Warner turned back the clock and fired 27 touchdown passes to lead Arizona. However, Leinart will be back as the starter despite his off-season shenanigans. He must prove that he can be durable which he has not shown through his first two years in the league. Beware of this fantasy situation though, folks; not only is Leinart in the doghouse, but head coach Ken Wisenhunt showed he is not afraid to play musical quarterbacks.

Running Backs – There were actually rumours this offseason that James wouldn’t be with the team come the 2008 opener. So far, he’s still there, and that’s probably for the best. It’s really not his fault the offensive line is terrible. No runner out there would do much better. That being said, his style lends itself more towards good line play. Faster backs, the home run hitters, are better suited for bad lines. James can’t do that as well.

Wide Receivers – We’re good to go here. Fitzgerald and Boldin are the best wide out duo in the league. If both stay healthy, both will get over 100 receptions. It’s that simple. Whether or not the Cardinals can afford both, that remains to be seen.

Tight Ends – Leonard Pope always seem to be ranked around that 15 mark as a guy capable of scoring some touchdowns, but he usually gets lost with the flashier receiving targets there, especially in goal line situations.

Defense/Special Teams – The Cards’ defense/special teams offers more chills than thrills. Neil Rackers is not the kicker he was a few years ago and the return units don’t quite cut the mustard. Arizona’s inability to have playmakers on defense and special teams makes it an undesirable fantasy unit.

By Andy Goldstein
This entry was posted on Tuesday, April 8th, 2008 at 2:06 pm and is filed under Andy Goldstein, Derek Jones, FOOTBALL, Team report. You can follow any responses to this entry through the RSS 2.0 feed. You can skip to the end and leave a response. Pinging is currently not allowed.