Ice Chips: Down The Stretch 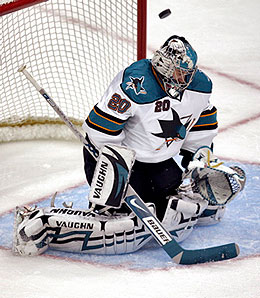 When the Sharks take a bite out of weaker clubs, expect to see Brian Boucher between the pipes.

With just a few weeks left, we’re into the stretch run of the season, and that means it’s purely inter-divisional matchups (minus one Bruins/Devils game). What does this mean from a fantasy perspective? Well, you can make an educated guess as to which goalie will play depending on whether or not the team has already secured their position and whether or not the opponent is out of the playoffs. For example, a San Jose game vs. Dallas would almost certainly be Evgeni Nabokov in net, but if it’s against Los Angeles, look for Brian Boucher to give Nabokov a night off.

On the flip side, for teams out of the playoffs, if players have had nagging injuries, look for them to move forward with rehab or surgery rather than trying to fight through it. Rick DiPietro’s a good example of this, as he’s opting to get surgery now and have a leg up on recovery.

During the Florida Panthers’ recent resurgence, Olli Jokinen’s led the way. One name that might not get much recognition though is Rostislav Olesz. With points in five of the last seven games and a spot on Jokinen’s wing, the 23-year-old former first rounder (2004) is showing signs of why he was drafted so high. Will it be enough to push the Panthers into the playoffs? Here’s thinking probably not, and yet again the Panthers will waste a terrific last stretch of the season.

With Dallas dropping all the way down to fifth place in the West, one has to look at the recent cold streaks of Mike Ribiero and the on-again-off-again season of Brad Richards. Ribiero’s led the Stars since the season opened, but he only has three points in all of March. Richards, who blew away Stars’ fans with a five-point premiere, only has four points in the ensuing seven games. Not surprisingly, this stretch is when Dallas fell from the Pacific lead to the middle of the pack.

The remaining games in Tampa are a tryout for next season, but one player who’s getting the opportunity of a lifetime is Jussi Jokinen. Dallas’ former shootout specialist has found himself on a line with Vincent Lecavalier and Martin St. Louis as the Bolts look forward toward next season. After starting off relatively slowly, Jokinen’s adjusted and is currently riding a five-game point streak. His +/- is awful, but so it goes with the Tampa Bay Lightning.

Similarly, Jeff Halpern’s gone from a 0.5 point-per-game guy to all sorts of ice time and special teams opportunities in Tampa. It’s moves like this that can help your fantasy team finish strong; a player like Halpern is given the opportunity to play the second-line role rather than being a fourth-line checker. Don’t forget, the former Caps’ captain has had a 20-goal season in his NHL career and might thrive in a second-line role behind Lecavalier. And chances are, Halpern’s still available in your league.

The Peter Forsberg experiment isn’t working out in Colorado. When Forsberg’s been in the lineup, he’s created his share of scoring chances. It’s just that he’s hardly played since returning to Colorado. Whether this is strategically done to make sure he is in prime shape for the playoffs is anyone’s guess, but with Paul Stastny fighting a nasty flu bug and the team needing goals, look for Forsberg to try to play Superman sooner rather than later.

By Mike Chen
This entry was posted on Friday, March 21st, 2008 at 9:27 pm and is filed under HOCKEY, Ice Chips, Mike Chen. You can follow any responses to this entry through the RSS 2.0 feed. You can skip to the end and leave a response. Pinging is currently not allowed.