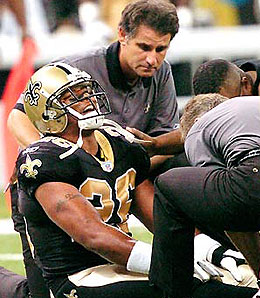 Deuce McAllister’s health woes in 2007 not only left the Saints shorthanded, but led to Reggie Bush being exposed for his lack as an every down back.

New Orleans represented one of the league’s biggest disappointments in 2007. Yet, Drew Brees got it together to throw 28 touchdown passes. Wide receiver Marques Colston was on the receiving end for 11 touchdowns. After a slow start, Colston did not suffer a sophomore slump and caught 98 balls for 1,202 yards. The passing game delivered the goods in the second half of the season. However, the defensive struggles and an inept running game led to problems aplenty.

As sad as it is, Reggie Bush isn’t an every down back. He’s a really good third down option that can be used in the same backfield and at the wide out spot. He’s a jack-of-all-trades, but master of none. In fact, the Saints might have known this all along. There’s a reason Deuce McAllister (when healthy) was getting more carries. There’s a reason the Saints were reportedly interested in the services of free agent running back Michael Turner. There’s a reason we’ve heard whispers about the Saints devoting a first day draft pick on a back. Bush and his 3.7 yards per carry average helped exactly no one. It looks like he’ll have one more chance to demonstrate an ability to carry the load, but we’re not banking on it.

The Saints have been busy trying to bolster a defense that ranked 26th overall. The team acquired former Jets linebacker Jonathan Vilma, ex-Panther linebacker Dan Morgan and Patriots cornerback Randall Gay. Also, Jaguars defensive end Bobby McCray was added to help a mediocre pass rush. The focus is there to improve a defense that never provided enough get up and go last season.

Forget the first two rounds. The Saints will probably spend those on defensive players. Pardon me while I yawn. That, however, does not mean the Saints should be a team to ignore later in the draft. As we mentioned above, we think the Saints could spend a pick on a high-upside runner, and it looks like at least a couple will be available in the third round. If Jamaal Charles is available, they would be foolish to pass him over. He could be a productive player in this league and is our darkhorse back out of this class.

Quarterbacks – Brees continues to be the man. He shrugged off a slow start and was one of the more productive signal callers in the second half of the season. It’s tough to bring out rankings quite yet, but we don’t see why his value should fall below the fourth or fifth spot for quarterbacks.

Running Backs – Sorry, but we have given up on Bush. Don’t draft him unless you crave inconsistency. If a player like Charles is drafted, he’s worth a late round selection. But we’ll know more about this position after the draft.

Wide Receivers – As mentioned earlier, Colston delivered in his second season. There is nothing suggesting he’ll come up short in his third year. Bush was second on the team in receptions but did not provide the expected impact. The team’s biggest surprise turned out to be David Patten, who finished second on the team in receiving with 792 yards. All three figure to play a role again in the passing game. By the way, remember Robert Meachem? The Saints drafted the former Tennessee Volunteer with the 27th pick in last year’s draft. He was inactive for every game last season because of a knee injury. The team hopes he can provide depth to the receiving corps.

Tight Ends – Eric Johnson and Billy Miller are back again for the Saints in ’07. They combined for 75 catches and four touchdowns last season. Between the 20s they’ll be a factor, but in the redzone, look for the Saints to explore other options.

Defense/Special Teams – The Saints’ reclamation project should yield some results in 2008. They are still a mid to low level defense in fantasy terms. Their special teams further weakens the unit’s value. It would be nice if Bush did something to help the return game, but he only mustered three attempts last season.

By Andy Goldstein
This entry was posted on Friday, March 21st, 2008 at 10:00 am and is filed under Andy Goldstein, Derek Jones, FOOTBALL, Team report. You can follow any responses to this entry through the RSS 2.0 feed. You can skip to the end and leave a response. Pinging is currently not allowed.