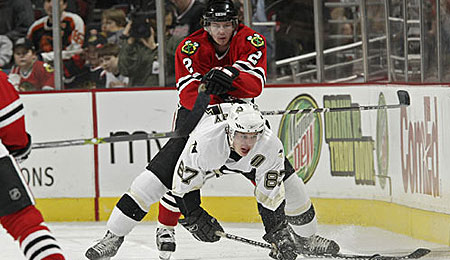 Duncan Keith, who has made Sidney Crosby his bitch, is a key cog on the young and improving Blackhawks.

The Hawks still have a long way to go – as clearly shown in their last two games – but a recent hot streak by this young team has the organization thinking about the playoffs for the first time in a dog’s age.

The Hawks are coming off a tough 6-5 loss in overtime to the Oilers Sunday, their second straight setback, but over the past ten, Chicago is 6-3-1. Included in that streak are big wins over Vancouver – one of the teams the Hawks are chasing for the final playoff spot in the West; a huge victory in Minnesota; and a shutout over the Ducks.

Regardless of whether it chases down Nashville and Vancouver for the final playoff spot, Chicago has issued fair warning to the league that is has arrived. This is a young team that is establishing itself as a clear team of the future.

Youth has definitely been served on this club, with 15 out of 26 players on the roster aged 25 or less. Nine of those are 22 or younger, and the defense corps in particular is very wet behind the ears. And don’t be thinking these youngsters are playing peripheral roles on this team. At the top of the team’s ice-time leaders are defencemen Duncan Keith, 24, and Brent Seabrooke, 22. The club’s two super-rookies — Jonathan Toews and Patrick Kane (both of whom are in contention for the Calder Trophy) – rank third and fifth among the team’s forwards in ice time, respectively.

Chicago currently sits five points back of Nashville and Vancouver, although it has a game in hand on the Preds. The Hawks are in 10th place in the West, tied with Phoenix and Columbus. Tuesday night, the Blackhawks are in Detroit, perhaps catching a lucky break with the Wings suddenly struggling. The following night, Chicago returns home to take on Carolina, a squad that is currently red-hot but is a sub-.500 team on the road. On Friday, the Hawks have a big game in Columbus with serious playoff race ramifications. The Blue Jackets are tough at home, but have been spinning their wheels a bit of late.

If the Hawks can keep up the intensity they’ve shown lately, they have a chance to make a move in the standings. Scoring hasn’t been a problem, as Chicago ranks fourth among Western Conference teams in goals. However, the offense would be even more potent if Chicago’s power play would get its act together. Clicking along at an unacceptable 15.4 per cent (26th in the NHL), this is the key area that the Hawks need to address before this team will be a serious playoff contender.

Imagine how good this club would be if Martin Havlat hadn’t been such a bust this season. Shoulder problems that could keep him sidelined the rest of the way, have limited him to 35 games in total. His output? A mere ten goals.

Also on the injury front, super pest Ben Eager recently returned after missing several weeks with a concussion, and made up for lost time with 10 PM in his first game back, and then another 12 two games later. He’s not exactly being counted on to generate many chances, but man does this dude get in people’s grills. Unfortunately, a jammed shoulder sidelined him Sunday. He was scheduled to have an MRI Monday, so let’s hope this won’t keep Eager from bashing opponents’ heads for long.

Goaltender Nikolai Khabibulin has been dealing with back spasms, knocking him out the past eight games. He was scheduled to test his wonky back with a skate Monday, but likely will remain sidelined for another week or two. Fortunately, the way Corey Crawford looked in shutting out the Ducks (earning himself a little bit of fantasy attention in the process), the Hawks may not have to rush the Bulin Wall back before he’s ready.

Robert Lang, who got dropped from some leagues after missing some time with a back injury of his own, looks to be well past this problem, potting a goal and adding two assists on Sunday. He’s been rather opportunistic this season, and is adding some much-needed veteran savvy to a young club, matching his goal total from last year in 16 less games.

Since last making the playoffs back in 2001-02, the Hawks have been feverishly at work to rebuild, a process that’s been painstakingly slow. They bottomed out with 59 points in the season prior to the strike, rebounding to 65 in 05-06, 71 last year, and 73 already this season, with another 13 game still to play. This puts them well on pace for their best season since that 01-02 team amassed 96 points.

Clearly, this club is finally headed in the right direction.

By RotoRob
This entry was posted on Monday, March 10th, 2008 at 10:32 pm and is filed under HOCKEY, RotoRob, Team report. You can follow any responses to this entry through the RSS 2.0 feed. You can skip to the end and leave a response. Pinging is currently not allowed.