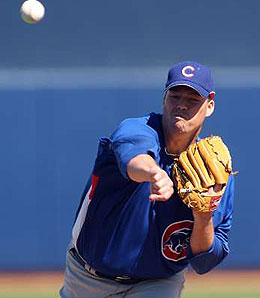 Jon Lieber appears to be the leading candidate for the Cubs’ fifth starter job. (REUTERS/Rick Scuteri)

There’s an interesting battle brewing for the final spot in the Cubs’ rotation, one in which veteran Jon Lieber may have taken the lead after tossing four shutout frames on Saturday.

Carlos Zambrano and lefty Ted Lilly are entrenched in the first two spots in the rotation, with southpaw Rich Hill expected to slide into the fourth spot in order to break up the lefties. Ryan Dempster, being converted back into a starter after spending the past few years closing, seems to have a guaranteed rotation spot, so he’ll likely be the No. 3 man.

That leaves Lieber, Jason Marquis and the two Seans – Marshall and Gallagher – to vie for the last spot.

Lieber definitely got some help from his defense when Mike Fontenot came up with a big double play, snaring a pop-up behind second base and then nailing a tagging Augie Ojeda at the plate to get Lieber out of trouble in the first inning.

Notwithstanding pissing Lou Piniella off with last week’s ‘start me or trade me’ demands, Marquis has been effective so far this spring, especially in his last outing. But as always, control will be an issue.

Although he made strides in this area last year, that’s a key consideration for Marshall as well, as evidenced by three walks, three wild pitches and a hit batsman in his first 5 1/3 innings. Marshall started the Cubs’ other Saturday game, looking strong with three shutout innings before getting touched up for a pair of runs in the fourth. He’s looking like a long shot.

Besides, both Marshall and Gallagher are being mentioned in trade talks. Either could head to Boston in a Coco Crisp trade, while Gallagher is also being talked about in the perpetual Brian Roberts-to-the-Cubs rumours. Adding fuel to that fire was the fact that an O’s scout turned up Saturday to check out Gallagher’s outing.

Piniella has said that one of the starters who doesn’t win a spot will likely have to pitch out of the bullpen. So unless the Cubs can find someone foolish enough to take the rest of Marquis’ contract (he’s signed through the end of 2009 with over $16 million left on his deal), it appears that he will have to pitch in long relief, his demands to start notwithstanding. It’s been seven years since Marquis last regularly pitched out of the pen, but for Lieber, it’s been over a decade.

And if control factors in here at all, Lieber has always been a specialist in this area, and judging by his spring results (five Ks, no walks), that’s not about to change.

By RotoRob
This entry was posted on Monday, March 10th, 2008 at 1:08 pm and is filed under BASEBALL, Position Battles, RotoRob. You can follow any responses to this entry through the RSS 2.0 feed. You can leave a response, or trackback from your own site.