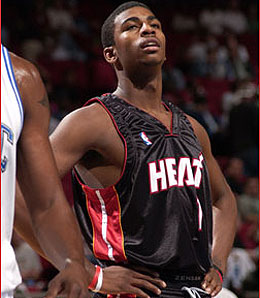 A season-ending injury to Dorell Wright has opened the door for Ricky Davis.

As the exhilarating race in the Western Conference continues with only about six weeks of games left in the regular season, recent injuries to big-name players have opened up minutes for guys who may not have been on your radar. This week’s edition of The Wire Troll features players who have risen to fantasy relevance due to such injuries.

The downtrodden Miami Heat has been a fantasy wasteland for the majority of this season. The season-ending injury to Wright and the constant speculation that the Heat is going to shut down Wade for the season has led to a steady rise in minutes for both Banks and Davis.

Banks, a throw-in from the Phoenix Suns in the Shaquille O’Neal trade, scored 20 points and chipped in four assists, three rebounds and one block in 41 minutes Friday night. Banks’ value correlates directly with the status of Wade. Wade, who sat out Friday’s game, revealed that his knee has gotten worse in the last week. If the Heat shuts down Wade, Banks should be picked up in all leagues.

Similarly, Davis is seeing increased minutes with the injury to Wright, and put up a nice line Friday night without Wade in the lineup – 10 points, 12 rebounds, four assists, two steals, and two blocks while playing 47 minutes. In Davis’ last five games, four of which were played with Wade, he has averaged 13.8 PPG, 4.8 RPG, 3.6 APG and 1.2 SPG. Davis is worth consideration in all leagues at this point and is a definite pick-up if Wade is shut down.

Coach Jim O’Brien has said he doesn’t know if Tinsley will be back this season. If you haven’t checked out Diener and your team is in need of a point guard, now is the time to grab him. He has been starting for the Pacers since mid-January and his production has been fairly consistent. In Diener’s last five games, he has averaged 13.8 PPG and 6.4 assists. If your team is in need of assists, he is worth picking up in deeper leagues.

The injury to Ilgauskas has opened minutes on the Cavs’ front line for Varejao and Ben Wallace. Ilgauskas is going to be out another seven-to-10 days and if your team is desperate for rebounds, then Varejao is worth monitoring (he is averaging 7.2 rebounds in his last five). Otherwise, leave him on the wire.

With the injury to Bosh, Nesterovic has entered the Raptors’ starting five. In the four games since CB4 went down, Nesterovic is averaging 10.3 PPG and 8.5 RPG. Reports out of Toronto are that Bosh is certainly out for Sunday’s game against Seattle and the possibility exists that he could miss the Raptors’ subsequent five-game road trip. If Bosh is out for an extended period of time, Nesterovic is worth consideration in deeper leagues.

West has missed two straight games with a sore left ankle and could miss his third game on Saturday night. While Ryan Bowen has been starting in place of West, it has been the rookie Wright gaining the most by the injury to West. In the two games without West, Wright has averaged 16.5 points, 7.5 boards and one steal while shooting 70 per cent from the floor. With such a small sample size, it is hard to gauge Wright’s fantasy value, however, if West should miss an extended period of time, Wright is definitely worth monitoring.

On Friday, Artest missed his second straight game because of a foot injury. Salmons, one of my favourite fantasy players, shined when Artest was out with an injury from December to mid-January. However, since Artest returned, Salmons’ role was dramatically reduced and his numbers severely suffered. In the past two games, in the absence of Artest, Salmons has catapulted his game again by averaging 14 points, 6.5 boards, 2.0 assists and 2.5 steals. If Artest’s injury keeps him out, Salmons is an absolute pick up in all leagues.

By Jordan Frank
Tags: Dorell Wright
This entry was posted on Saturday, March 8th, 2008 at 7:18 pm and is filed under BASKETBALL, Jordan Frank, The Wire Troll. You can follow any responses to this entry through the RSS 2.0 feed. Both comments and pings are currently closed.