Dear RotoRob: Can I Trust Miller and Harris? 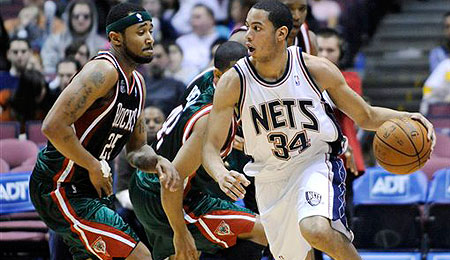 I dropped Al Thornton and picked up Beno Udrih as soon as I heard about the Mike Bibby trade.

Now I’ve been offered Mike Miller and Devin Harris for my Ray Allen and Udrih. I’m tempted to accept because I need some help in rebounds and because I’m scared that Boston may sit its players during my playoff run.

But can I trust Miller and Harris?

Miller has a gimpy back and I would worry more about him sitting down the stretch than I would Allen. Harris has the skills to be a good starting PG, but Allen does so much more than Miller will for you. Besides, Hakim Warrick has shown that he can more than handle the job of starting and scoring from the SF spot, so I doubt the Grizzlies are in a hurry to bring Miller back anyway. I’d pass.

Well, you’re a man of few words, I see, especially since you just sent a subject line and there wasn’t actually anything in the e-mail body! Hey, maybe your ISP charges you by the word.

At any rate, it depends on what you need.

As a centre, I take Dampier down the stretch since Houston has Carl Landry and Luis Scola who can play the five and Mutumbo can only play Shaquille O’Neal minutes these days.

Rob, I need your help!

Would you trade Elton Brand for Rafer Alston? How about Brand for Antonio McDyess? What types of players might Brand net in a trade? I’ve been holding on to him all year and now my team is slipping with Caron Butler out.

I already have Chris Paul, Andre Miller and Beno Udrih as my PGs, but I’m a little worried about Udrih’s lack of consistency. I’m also worried about my rebounding. I’m in a weekly, H2H, 12-team, 10-cat league (with Off. Rebs and TOs) and we start 10 players per week. I’m in fourth place with the top six making the playoffs. However, I’m only 1.5 games from falling out of playoff position and there’s only 3.5 games separating fourth from ninth in my league

Jeff Green is available on the free agent wire; should I get him?

Thanks so much for your help.

I would trade Brand for Alston or McDyess. There is no reason for Brand to come back this season as the Clippers are horrible and they want to see what Al Thornton can do with the minutes. Brand will play, but he won’t be any better than maybe 75 per cent this season. I would pick up Carl Landry or Luis Scola if they are on the waiver wire, though.

By RotoRob
Tags: Devin Harris
This entry was posted on Monday, March 3rd, 2008 at 1:38 am and is filed under BASKETBALL, Dear RotoRob, RotoRob. You can follow any responses to this entry through the RSS 2.0 feed. Both comments and pings are currently closed.