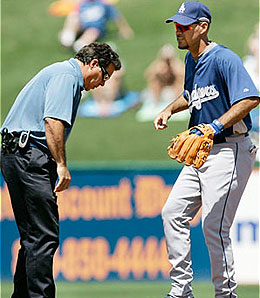 Will Carroll has been running a fascinating series over at Baseball Prospectus examining the health situations for each major league team.

He’s concluded that, after losing 951 man games and $20 million in salary to injuries in 2007, the Los Angeles Dodgers have the worst three-year health ranking in all of baseball. However, Carroll suggests that by bringing in trainer Stan Conte, the team is headed in the right direction.

Let’s face it, no matter who the trainer and physicians are, they can’t save guys like Darren Dreifort or Kevin Brown from the DL. The difference is that these days taking a calculated risk on someone like a Jason Schmidt or last year’s experiment with Randy Wolf can be entirely valid moves. These can be the type of gambles that Conte could make pay off, and the cheap Wolf-style signings are easier to make pay off above a club’s investment. The problem is that Schmidt is getting paid ace money while only offering a realistic hope that he comes back to league average.

Carroll writes that despite major injuries to Schmidt, Wolf and Jason Repko, the Dodgers actually improved last season to a middle of the pack ranking, but in looking at the last three years overall, no one is worse.

Among the Dodgers that Carroll lists as being injury risks this season are: Russell Martin, Rafael Furcal, Chad Billingsley, Andy LaRoche, Nomar Garciaparra and Schmidt.

By RotoRob
This entry was posted on Saturday, March 1st, 2008 at 4:43 pm and is filed under BASEBALL, Injuries, RotoRob. You can follow any responses to this entry through the RSS 2.0 feed. You can skip to the end and leave a response. Pinging is currently not allowed.