The Wire Troll: Chaos in Chicago 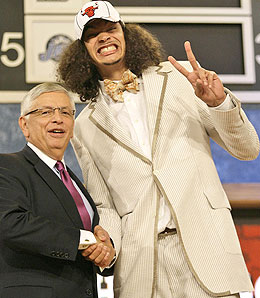 What do you think the chances are that David Stern has this pic on his nightstand? Despite his great ‘fro, Joakim Noah is too inconsistent to be a viable fantasy option.

‘Sup, everyone? My name is Jordan Frank and I am the new addition to Team RotoRob. As the new caretaker of The Wire Troll column, I will provide insight and analysis that will help you win your fantasy basketball leagues. If you are interested in such success, read below and continue to follow my weekly column every Saturday until the end of the regular season. And without further ado…

As the calendar turns to March, fantasy basketball leagues begin the crucial home stretch where free agent acquisitions can make or break a championship run. Whether you participate in a head-to-head or a Rotisserie league, the next month is critical to your team’s success. As the smoke clears from one of the most active trade deadlines in league history, the waiver wire is ripe with fresh pickings as coaches are becoming more comfortable with the new faces which have arrived. In the wake of such furious changes, this week’s Wire Troll will focus on the events in the league which have infused the waiver wire with new feastings.

Joakim Noah, C/Tyrus Thomas , PF, Chicago: The mystery that is the Chicago Bulls did not become any clearer with the last minute three-team trade between the Bulls, Cleveland Cavaliers and the Seattle Sonics that sent Ben Wallace and Joe Smith to the Cavs and Adrian Griffin to the Sonics. In return, the Bulls received Drew Gooden, Larry Hughes, Shannon Brown and Cedric Simmons.

While it was evident that the struggles of Ben Gordon, Chris Duhon and Kirk Hinrich would lead to Hughes seeing immediate minutes, it was unclear as to how Gooden would fit into the Bulls’ system. The departure of Wallace and Smith opened up a lot of minutes in the Bulls’ frontcourt and new head coach Jim Boylan immediately inserted Joakim Noah and Tyrus Thomas into the starting lineup.

Noah’s numbers have fluctuated greatly in his four starts with the Bulls. His first night as a starter produced a 14-point, 10-rebound, two-block game, while the next game saw him contribute just two points and two rebounds. While Noah will see increased minutes with the loss of Wallace and Smith, Noah is just too inconsistent to rely upon at this point in his career. In last night’s game, Noah’s fifth start, Gooden entered the game just 41 seconds after tip-off when the rookie turned his ankle. Noah returned to the game and finished with five points, four rebounds and two blocks. My advice is to leave Noah on the waiver wire.

Like Noah, Thomas has been wildly inconsistent all season. The departure of Wallace and Smith opened up a spot for Thomas in the starting lineup, however, rumours out of Chicago insist that Thomas’ run in the starting five may have already come to an end with the insertion of Gooden. Thomas is a much better alternative to Noah, having averaged 12.8 points, 8.0 rebounds and 1.8 blocks in the previous four games until Friday night. In last night’s loss to the struggling Washington Wizards, in which the Bulls blew an 18-point halftime lead at home, Thomas played only nine minutes and finished with two points and four rebounds. At this point, Thomas is worth monitoring, but until his minutes become more consistent, you should leave him on the wire.

Delonte West, PG/SG, Cleveland: The three-team trade between the Bulls, Sonics and Cavs discussed above brought four players to Cleveland – Delonte West, Wallace, Smith and Wally Szczerbiak. From a fantasy perspective, West was the major benefactor of this deal as he immediately took over the starting PG position for the Cavs. In his four games with the Cavs, he has averaged 11 points, 5.0 assists, 4.3 boards, 1.0 steal, and 1.3 threes. Despite West’s poor shooting, his numbers have been solid since joining the new-look Cavs. Most importantly, he is averaging 34.5 MPG. West should be picked up in all formats.

Wally Szczerbiak, SF, Cleveland: Wally World has been able to pick up some solid minutes in his three games with the Cavs and has scored in double figures in every one. Szczerbiak has averaged 34 MPG and is putting up 11.7 PPG. He has not been contributing significantly to any other fantasy category yet, but deserves to be monitored considering his minutes and the injury to Daniel Gibson.

Johan Petro, C, Seattle: In the three-team trade with the Cavs and Bulls, the Sonics received Ira Newble, Donyell Marshall and Griffin. In addition, the Sonics traded Kurt Thomas to San Antonio. In the four games since Seattle dealt Thomas, Petro started all four at centre. In the first three of those games, he averaged 9.0 points and 8.7 rebounds while playing 26 minutes a night.

However, last night, Petro only took three shots in 17 minutes and finished with zero points and five rebounds. Seattle has a log jam at the power forward position with Nick Collison, Chris Wilcox and Marshall. As the only viable centre option for Seattle, Petro will continue to get his chance to play and is worth consideration in deeper leagues, especially if your team needs rebounds.

Mickael Gelabale, SF, Seattle: With the departure of Szczerbiak, Gelabale has seized his opportunity to get some minutes. In the first four games without Wally World, the Frenchman scored 15.3 points per game, while grabbing 5.5 rebounds and shooting 59.7 per cent from the floor. Gelabale struggled in last night’s game against the Heat and shot 1-for-8 from the floor, but he is still worth a flier in deeper leagues.

After a long week of speculation regarding Cassell’s future, the Los Angeles Clippers bought out his contract on Thursday. Once Cassell clears waivers, he will sign with the Boston Celtics as a back-up point guard to Rajon Rondo. Cassell finally got his wish and will be reunited with Kevin Garnett . Cassell has missed four straight games with a sprained wrist and missed 12 games in December, but averaged 12.8 points, 4.7 assists, 2.8 rebounds and 25.7 minutes in 38 games with the Clippers. Cassell will cut into Rondo’s minutes in Boston, but I don’t envision the veteran’s numbers increasing significantly. He may be a cheap source of assists if you are desperate in a deep league. Otherwise, monitor Cassell from afar.

In the somebody-has-to-play-point-guard category, one of Brevin Knight, Dan Dickau and Flip Murray will assume Cassell’s role as the point guard for the Clippers. Knight, the front-runner in this race, had a four-game audition while Cassell was sitting with an injured wrist. During that span, Knight averaged 5.8 PPG, 4.4 APG, and 1.4 SPG, however, he hurt his hand in Wednesday’s game and did not return. Dickau, of Gonzaga fame, didn’t do much in his 25 minutes after Knight got injured, missing all five of his shots and finishing with one point, four boards and five assists. The Clippers are expected to sign Murray to shore up the point guard spot.

In last night’s game, Knight showed no signs of being hampered by the injury and played 35 minutes, enjoying a solid game with nine points, 12 assists, three rebounds and three steals. It appears that Knight is the clear-cut winner in the replace Cassell contest and should be picked up in all leagues. If Knight misses any time due to injury, Dickau would be the man to watch.

Dikembe Mutombo, C, Houston: The unfortunate season-ending injury to Yao Ming has left a huge void in the middle on a Houston Rockets’ team that has won 14 straight games. In Houston’s first game without Yao, the ageless wonder, Mutombo, started at centre and finished with four points, six rebounds and four finger-wagging blocks. In Mutombo’s second start Friday night, he had a nice line of four points, 13 rebounds and four blocks. If your team is desparate for a centre and needs rebounds and blocks, then Mutombo is worth picking up in deep leagues. Keep an eye on his minutes though, as the 41-year-old may not be able to play more than 25 minutes a game.

Luis Scola, PF/C, Houston: If Luis Scola is still on your league’s waiver wire, stop reading this article at go pick him up. He is averaging 8.8 PPG and 5.4 RPG in his rookie season and the injury to Yao will significantly increase Scola’s minutes and touches. Scola is a versatile player who can shift between the four and five positions depending on Coach Rick Adelman’s lineup. Scola should be picked up in all leagues.

Carl Landry, PF/C, Houston: Despite being listed at 6’9”, Landry, not Scola, backed up Mutombo at centre in Houston’s first game since the Yao injury. Landry, a rookie from Purdue, has been a hot waiver wire pick up the last few weeks as his minutes have slowly been increasing. In the last five games, he is averaging 11.8 points and 6.4 boards while shooting a ridiculous 75.9 per cent from the field. In addition, Landry may be able to pick up centre eligibility with his new role. He should be picked up in most leagues as his minutes and numbers will increase with the loss of Yao.

Jordan Farmar, PG, LA Lakers: The Pau Gasol trade has catapulted the Lakers into the frontrunner position in a loaded Western Conference as the team has gone 11-2 since the Spaniard arrived. Gasol, Kobe Bryant and Lamar Odom have been solid as usual, but the team’s success can be equally linked to the emergence of the Lakers’ supporting cast. Everyone knows about Derek Fisher, but Jordan Farmar has been outplaying Fisher recently. On Thursday night, Farmar scored a career-high 24 points, going 9-of-14 from the field with four 3-pointers, four rebounds, three assists and three steals. Farmar has scored double-figures in five of the last seven games, and has been seeing consistent minutes off the bench. Of course, the injury to Vladimir Radmanovic has increased Farmar’s minutes, but the youngster has taken advantage of his increased role. Farmar should be monitored closely in all leagues and is definitely worth picking up in deeper leagues.

Sasha Vujacic, SG, LA Lakers: Vujacic has been another key contributor to the Lakers’ recent success. He has been averaging 11.7 PPG in 13 games in February and is shooting 51 per cent from beyond the arc. Vujacic has hit 18 threes in his last six games, prompting Lakers’ coach Phil Jackson to state “now we see that he’s got a definite role.” With his increased minutes, Vujacic is worth picking up in deep leagues, especially if your team is in need of threes.

Others to Monitor on the Wire

By Jordan Frank
This entry was posted on Saturday, March 1st, 2008 at 4:01 pm and is filed under BASKETBALL, Jordan Frank, The Wire Troll. You can follow any responses to this entry through the RSS 2.0 feed. You can skip to the end and leave a response. Pinging is currently not allowed.