Harbaugh has Work Cut Out for him with Ravens 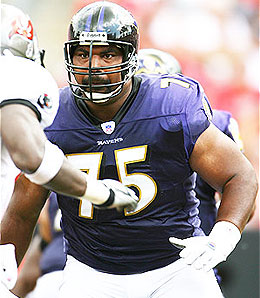 New Baltimore Ravens’ head coach John Harbaugh faces a major uphill battle as he tried to rally this team after a devastating 5-11 season in which it sunk to the bottom of the AFC North.

One of the first orders of business, and this is more of management issue of course, is the team must try to trim some cap space.

Restructuring Jonathan Ogden’s deal was a good first step and that should free up enough cap space to keep the franchise tag on Terrell Suggs.

Back-up running back Mike Anderson, a total bust since arriving in Baltimore, has been released, opening up at least $1.3 million in cap space, another move that should help the Ravens re-sign their restricted free agents. However, the team still needs to clear around $10 million in cap space.

One of those restricted free agents is starting left guard Jason Brown, but the club is expected to retain him after they gave him a second-round tender offer Wednesday.

So now if Brown signs an offer sheet from someone else, Baltimore has the right to match it and retain him or let him walk and get that team’s second round pick.

Obviously, the Ravens would be wise to keep the up and coming guard. Just 24, he made SI’s All-Pro team last year and he’s been incredibly resilient since taking over as a starter in 2006, starting 28 straight games.

GM Ozzie Newsome said Baltimore would like to talk to Brown about an extension before he can become an unrestricted free agent after 2008. Brown is talking the talk, at any rate, saying how much he loves the city and the organization.

Whatever. Nobody loves Baltimore. It may be a great organization (although somewhat beleaguered now after such a crappy year), but Charm City is anything but.

By RotoRob
Tags: Baltimore Ravens
This entry was posted on Wednesday, February 27th, 2008 at 10:50 pm and is filed under FOOTBALL, RotoRob, Transactional analysis. You can follow any responses to this entry through the RSS 2.0 feed. Both comments and pings are currently closed.