Who Bats Leadoff for the Twins? 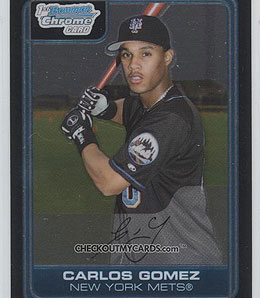 Carlos Gomez, the centrepiece heading to the Twins in the Johan Santana deal, could become the team’s new centrefielder and lead-off hitter.

There’s an interesting battle brewing on the Twins as the club tries to sort out both its centrefield situation while also seeking a lead-off hitter. Ideally, this person will be one and the same.

We discussed this topic to an extent on the weekend, but now it appears that not only are all three centrefield candidates (Carlos Gomez, Jason Pridie and Denard Span) vying for the top-of-the-order gig, but so is infielder Nick Punto.

Today, this quartet received tutorials from not one but two Hall of Famers, as both Paul Molitor and Rod Carew imparted lead-off batting wisdom to the group.

Last week, I suggested Gomez has the inside track on the job, but manager Ron Gardenhire believes the youngster’s skills need “to be refined.” Plus, Gomez typically was a middle of the order hitter in the minors, whereas Span and Pridie each have experience batting leadoff.

On the plus side, Gomez has speed, can get on base and can bunt – all attributes required by a lead-off man. I still think he’s going to win this battle, even if he needs a month or two of seasoning first. By June, if not sooner, expect to see Gomez patrolling centrefield and batting leadoff for the Twins.

In other Twins’ news, Brian Buscher has a decent chance of sticking as a corner infielder. His opportunity to win the starting third base job disappeared when for some reason Minny gave Mike Lamb $6.6 million for two years to handle the hot corner. But Buscher spent the offseason working on his defense at third, and he’s also working out at first base this spring as the Twins seek someone to back up Justin Morneau. If Buscher can handle both corners, it will vastly improve his chances of breaking camp with the team. Of course, he didn’t hurt himself this afternoon by mashing a pair of doubles, including one that tied the game against Concordia University.

How about those arms that Minnesota got in the Johan Santana trade? We’ve already discussed them in-depth earlier this month, but now we get to see them in action.

Philip Humber was ripped for four runs in one inning, surrendering a two-run double and then a two-run homer. Sure, he just had his first live throwing session on the weekend, but this was an inauspicious start.

Kevin Mulvey got the start and walked the lead-off man, but settled down to hurl a pair of goose eggs. And finally, Deolis Guerra, who won’t be 19 for another couple of months, contributed one shutout inning.

By RotoRob
This entry was posted on Tuesday, February 26th, 2008 at 10:53 pm and is filed under BASEBALL, Position Battles, RotoRob, Team report. You can follow any responses to this entry through the RSS 2.0 feed. You can skip to the end and leave a response. Pinging is currently not allowed.