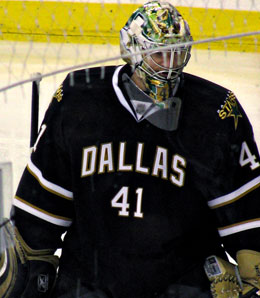 Mike Smith’s value should soar as a starter for the Lightning.

The trade deadline is always a crazy time. Imagine if the moves actually affected the rosters? Like everyone traded had to leave a fantasy roster, too? Even if a trade doesn’t mean your roster changes, there are fantasy implications as some trades will make good players better and some trades seem like they’re designed to destroy careers.

Brad Richards to Dallas for back-up goalie Mike Smith, plus some other parts? That’s win-win. Smith will probably start in Tampa, since he’s a number one goalie trapped in a back-up situation. And Richards will probably thrive on a line with Mike Modano, as will Modano by having a bona fide offensive talent beside him.

Sergei Fedorov to the Caps for defensive prospect Ted Ruth? That’s a great move for Fedorov, getting to play with Alexander Ovechkin. Fedorov is not the same player as previous years, but he can’t help but put up numbers with Ovechkin. Hell, I could get 20 points alongside Ovechkin.

Montreal goalie Cristobal Huet’s trade to the Caps? That’s got to hurt. The former starting goalie is now going to be backing entrenched Olaf Kolzig, and even if the workload split is 50-50, it’s still going to be less ice time for the feisty Frenchman.

Marcel Hossa to the Penguins also isn’t a slam-dunk. While he’ll be able to fill Sidney Crosby’s role, what happens when Crosby comes back from his ankle sprain? Can coach Michel Therrien find minutes for Crosby, Hossa, and Evgeni Malkin? Will Hossa and Crosby have enough time to gel? Probably not.

Similarly, Vinnie Prospal’s trade to the Flyers probably won’t do much for his numbers, seeing as how he’s going from working with one speedy, undersized forward (Martin St. Louis), to another (Daniel Briere).

Still, what fun would it be if all the trades were good ones?

By Steven Ovadia
This entry was posted on Tuesday, February 26th, 2008 at 10:05 pm and is filed under HOCKEY, Steven Ovadia, Transactional analysis. You can follow any responses to this entry through the RSS 2.0 feed. You can leave a response, or trackback from your own site.