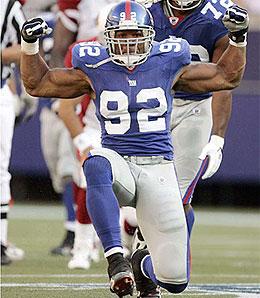 Is Michael Strahan serious about packing it in this time?

The New York Giants have been NFL Champions for all of three weeks and change, and now they face the prospect of life without one of their defensive stalwarts.

Defensive end Michael Strahan, a 15-year veteran, is once again seriously considering packing it in and retiring this offseason.

If you listen to Pro Bowler Osi Umenyiora, Strahan will be back for a 16th season: “He’s coming back…don’t listen to all that” retirement talk.

Well, that remains to be seen. But after riding a dominating defense to a 17-14 victory over the New England Patriots in Super Bowl XVII, the Giants could be dealing with a big hole in that D in 2008.

“You know, you couldn’t write a story any better to ride off into the sunset this way,” Strahan said. “But like I said, I just haven’t decided exactly how I want to end it. It’s a long season, man. I’m physically and mentally tired. It’s tough.”

So there you have it. The 36-year-old with 141 and a half career sacks is definitely undecided on his future.

If he does decide to leave, what a fantastic cap he put on his career. Helping the Giants win their last seven games of the regular season and then head out on the road and beat the Bucs, ‘Boys, Pack and Pats in the playoffs? Impressive stuff.

Of course, this isn’t the first time that Strahan has mulled hanging ’em up. He missed all of training camp last season while considering retirement. This year, he originally told the team that he’d let GM Jerry Reese know in March, but now Strahan has delayed that, saying he’d “hopefully” inform the team of his decision by the draft (April 26-27).

So it could be another few weeks before we know whether Strahan will be back with the only NFL team he’s ever played for.

Clearly, this season he was not slowed by a major foot injury in 2006. He played in every single game and recorded nine sacks. He’s headed into the final year of his contract, which will pay him $4 million next year, but last week, Giants’ co-owner John Mara said the team would consider redoing his contract. Based on his comments, however, money isn’t a major motivator for Strahan.

Will Straham pull a John Elway and Jerome Bettis and leave after winning a Super Bowl? Or will he return to try to lead the Giants to a second straight championship?

By RotoRob
This entry was posted on Tuesday, February 26th, 2008 at 6:48 pm and is filed under FOOTBALL, RotoRob. You can follow any responses to this entry through the RSS 2.0 feed. You can skip to the end and leave a response. Pinging is currently not allowed.