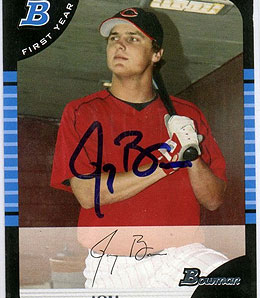 Will the arrival of Jay Bruce expedite Adam Dunn’s departure from Cincy?

Adam Dunn’s tenure as a Red could be nearing an end.

While the team picked up his 2008 option on Halloween, the veteran outfielder says that there have been no discussions about a contract extension that will keep him in Cincinnati beyond the end of this season, when he becomes a free agent.

GM Wayne Krivsky admitted that the two sides aren’t talking about it.

Given that most players prefer not to engage in extension talks during the season, it’s looking very possible that Dunn could be playing out the string with the Reds.

After nearly crashing to the bottom of the NL Central last season, the Reds may be thinking about a rebuilding program soon. If this team isn’t a .500 club by the All-Star break, and Dunn still hasn’t been inked to an extension, chances are he’ll be on the trading block.

Despite dealing with a balky knee that required arthroscopic surgery on September 26 – he’s doing very well now, thank you very much – Dunn enjoyed his finest season last year since 2004. He cranked out 40 dingers for the fourth straight season and even cut his prodigious strikeout rates a bit.

But with top prospect Jay Bruce knocking on the door and Joey Votto (who can play the outfield as well as first base) in need of PT, Cincy will likely be tempted to part with Dunn should this season begin to look like a write-off as last year was.

Dunn owners should be aware of this development considering his OPS over the past three years is 95 points higher at home – something to worry about should he get dealt away from one of the best hitting parks in the majors, and the second best home run park in baseball.

By RotoRob
This entry was posted on Tuesday, February 19th, 2008 at 3:30 pm and is filed under BASEBALL, RotoRob, Rumours. You can follow any responses to this entry through the RSS 2.0 feed. You can leave a response, or trackback from your own site.