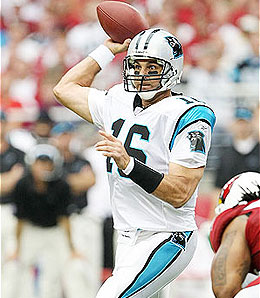 Sixty-four-year-old Vinny Testaverde was in control of the Panthers’ offense for most of 2007. ‘Nuff said.

Leopards change their spots. Panthers, as in those that play football from Carolina, just change.

And after a disappointing 7-9 campaign – the team’s first sub-.500 season since 2004 – plenty of changes are expected this offseason for a team that has seemingly been in free fall since losing in the NFC Championship game two years ago.

While the rush attack was acceptable, the passing game was completely devoid of life after Jake Delhomme underwent season-ending surgery. Vinny Testaverde (what is he now…56?) was left in charge for most of the year with predictably horrible results.

On defense, the Panthers were very much a middle of the pack team, so this offseason, there is no lack of areas for the team to try to improve, a situation that will prove difficult because of salary cap restraints.

Let’s take a look at some of the stories developing on both sides of the ball for Carolina this winter.

With the NFL waiver wires re-opening, the Panthers could cut DeShaun Foster today. He was given more work in 2007, but proved less effective, thanks in part to Carolina having no passing game. Still, with Foster due $4.75 million next year, the Cats may opt to promote DeAngelo Williams to feature back. Williams certainly showed promise last year. If they go that route, finding a top back-up running back will have to be a priority this offseason.

Without Delhomme around to feed him, Steve Smith slipped again, but the real issue here was finding a quality second WR behind Smith. Drew Carter, although he took a step forward, didn’t appear to be the answer. Perhaps Dwayne Jarrett is ready to develop into a bigger threat in his second season. His rookie season was restricted by a knee sprain, and Delhomme truly believes Jarrett can be a force in 2008, so put him on your sleeper list.

Don’t expect Chad Johnson to fill that second (or first) WR spot, despite his public desire to reunite with college teammate Smith. Salary cap restrictions would make moving Johnson impossible for Cincy. Detroit’s Roy Williams, rumoured to be trade bait, could be a more viable option.

As for Delhomme, his recovery in on schedule (he’s now throwing a Nerf football each morning), so he’s expected to be ready for training camp. His return alone should help propel the Panthers back into a .500 club, but they’ll need than organic improvement if this team has designs on returning to the postseason for the first time since the 2005 season.

At backup, David Carr’s days could be over in Carolina after just one season. It’s pretty clear either way that he’s no longer a candidate for a starting job under any circumstances. Matt Moore did enough as a rookie to suggest he can handle the No. 2 job behind Delhomme.

Nine-year veteran DE Mike Rucker mulled retirement, but has now decided to return for another season. He’s an unrestricted free agent, however, so he may not be back with the Panthers, who would prefer to inject some youth. If he returns to Carolina, a team that uncharacteristically failed to do a good job pressuring opposing QBs, it may be as a reserve. He’s a team leader, and is just one behind Julius Peppers for the all-time franchise lead in sacks, but Rucker’s time with the Panthers may be over.

Carolina just re-signed DL Damione Lewis, penning him to a three-year deal. It definitely adds depth to the D, but the Panthers need to do more if they want an elite defense. LB Jim Beason, third in the NFL with 140 tackles last season, is one of the best in the business, but even with him aboard, Carolina’s defense was middling at best.

By RotoRob
This entry was posted on Monday, February 11th, 2008 at 2:33 pm and is filed under FOOTBALL, RotoRob, Team report. You can follow any responses to this entry through the RSS 2.0 feed. You can skip to the end and leave a response. Pinging is currently not allowed.