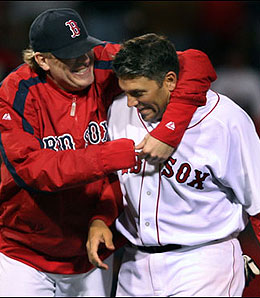 Doug Mirabelli, right, and Curt Schilling will both be back in Boston this year.

After winning two World Series titles in the past four years, have the Boston Red Sox decided to rest on their laurels?

Oh sure, the Sox got off the couch long enough to keep some of their own free agents like Mike Lowell, Doug Mirabelli, Curt Schilling and Mike Timlin, but what have they done to improve themselves? Not much, to be honest.

The team’s biggest off-season story – the pursuit of Johan Santana – appears to be a non-starter, as it looks like he’s going to the Mets. Well, at least the damn Yankees didn’t get him.

And Boston kicked the tires on a few lesser lights, namely Kerry Wood (who opted to stay with the Cubs), Mike Lamb (who landed an everyday gig in Minnesota) and Brad Wilkerson (who wound up in Seattle).

But in the end, the Red Sox have done precious little to the roster that was good enough to be the last one standing in October.

Unable to woo Wood away from the Cubs, the Sox landed David Aardsma for a couple of minor leaguers without much of a future. Aardsma averages almost a strikeout per inning, so if he can ever tighten up that control, he’s still got great potential to be a solid late-inning man.

Boston also loaded up on minor league relievers who have very little chance of ever helping the team: Dan Kolb, Dan Miceli, Jon Switzer and Scott Atchison. Michael Tejera, who last pitched in the bigs in 2005, was also added, likely to add depth to the team’s Triple-A rotation. Whoop de doo!

On offense, the team gave minor league deals to Keith Ginter, who last appeared in the majors in 2005, Joe Thurston (who spent the entire 2007 season in the minors), and Gil Velazquez, a veteran minor league shortstop who first reached Triple-A in 2002, yet has never appeared in the Show. Again, nothing to get excited about here.

The Sox may not be done yet, of course. They still have a major trade chip in Coco Crisp, who could be the cornerstone of a deal should something present itself as the spring nears. Worst case scenario is that Crisp or (gasp) Jacoby Ellsbury gets moved in a deadline deal.

It’s difficult to imagine Lowell duplicating his phenomenal 2007 season, but Manny Ramirez, entering the final guaranteed season of his big contract, has reportedly been a workout maniac this offseason, so let’s hope to see a rebound year from him. J.D. Drew, Julio Lugo and Crisp (assuming he’s there) also should be better this year.

By RotoRob
This entry was posted on Friday, February 1st, 2008 at 1:50 pm and is filed under BASEBALL, RotoRob, Team report. You can follow any responses to this entry through the RSS 2.0 feed. You can skip to the end and leave a response. Pinging is currently not allowed.