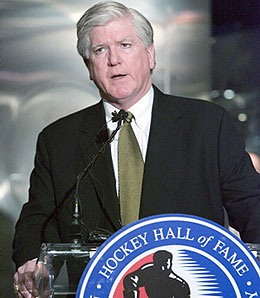 Who will Ducks’ GM Brian Burke lure out of retirement next?

If you’ve been holding on to Ottawa goalie Ray Emery, hoping he would turn things around, ignoring the fact that he’s given up 12 goals in his last four starts, you’re probably going to be disappointed to learn not only is Ottawa trying to move him, but it can’t find anyone to take him. So if you’re expecting a second-half turnaround, Emery might not be your goalie. At least not this season. The reason the Senators are so mad? Emery was late for another practice. Luckily, punctuality is not a fantasy stat. Let’s not even mention his rumoured off-ice exploits. Oops, I guess we just did. No wonder no NHL club wants to risk Emery screwing up team chemistry.

How about Sergei Samsonov? Did anyone think to draft him at the start of the season? He really hasn’t been the same player since he signed with Montreal in the summer of 2006. I was shocked the Habs were able to trade him to Chicago. And I was even more shocked when Carolina claimed him off waivers. But maybe Southern living agrees with the forward: he’s got three goals and five assists in 10 games for the Hurricanes. Not huge numbers, but certainly not awful ones. And maybe, just maybe, Samsonov, who put up 75 points for Boston in the 2000-01 season, has found his groove again.

It was kind of a big week for returns in the NHL. Teemu Selanne, eating roster spots on many a fantasy team, returned to the Ducks. He’s been skating with the team and should be back in the lineup soon. No word on if Anaheim GM Brian Burke plans to lure anyone else out of retirement, but maybe claim Brett Hull for your fantasy roster, just in case. Heck. Even grab Bobby Hull. Burke is great at getting people to unretire.

And for those of you who want a roster of inactive players who are probably going to return to the NHL at some point, Peter Forsberg is said to be inching closer to a comeback. Of course, when you talk about Forsberg, you’re contractually obligated to qualify it with ‘when/if he’s healthy,’ as in, ‘when Forsberg is healthy, he’s a game-changing player who deserves a spot on your roster,’ or ‘when was the last time Forsberg was healthy?’

Speaking of healthy, you’ve no doubt heard (if you haven’t, you need more help than we can legally offer in this space) Sidney Crosby is out six-to-eight weeks with a high ankle sprain. Since Crosby went out January 18, Evgeni Malkin has been a rollercoaster ride. Malkin’s first three games without Sid the Kid saw him put up four goals and an assist. The next two games yielded a single point. Is this a cause for alarm? Probably not, but it’ll be interesting to watch how Malkin adjusts to being the primary scoring option and to being the focus of a lot more defensive attention.

By Steven Ovadia
Tags: Ottawa Senators
This entry was posted on Friday, February 1st, 2008 at 2:08 pm and is filed under HOCKEY, Ice Chips, Steven Ovadia. You can follow any responses to this entry through the RSS 2.0 feed. Both comments and pings are currently closed.